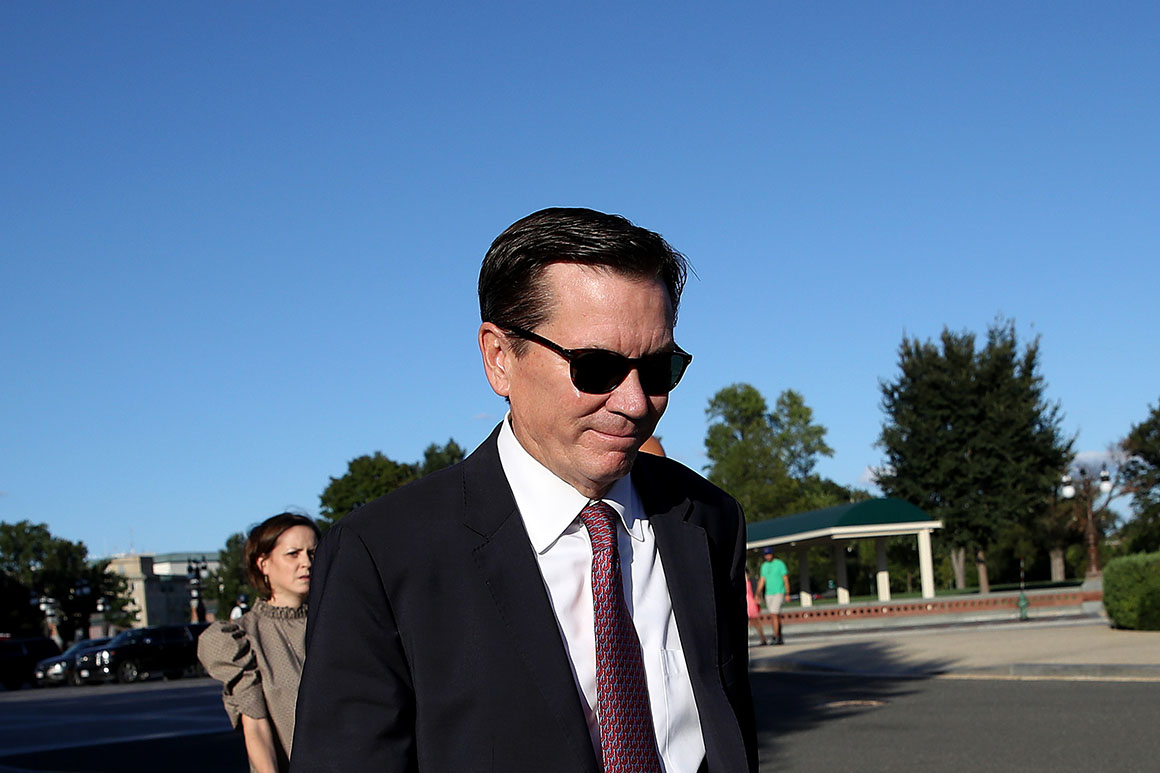 Two weeks before he was fired, Intelligence Community Inspector General Michael Atkinson told the Senate’s top Democrat that the past six months had been “a searing time for whistleblowers,” and rebuked public officials who fail to defend whistleblowers when the stakes are highest.

In a letter to Senate Minority Leader Chuck Schumer dated March 18 and obtained by POLITICO, Atkinson took a thinly veiled swipe at those who had failed to defend the intelligence official who first reported concerns about Trump’s conversation with the president of Ukraine last summer.

“As you know, the past six months have been a searing time for whistleblowers and for those who work to protect them from reprisal or threat of reprisal for reporting alleged wrongdoing,” Atkinson wrote.

“People may spend their entire careers publicly encouraging whistleblowers to come forward and sound the alarm if they observe suspected abuse or wrongdoing in the federal government. Many of those same people proclaim publicly that they will stand by whistleblowers and protect them from reprisal or threat of reprisal when they do sound the alarm. Those repeated assurances of support for whistleblowers in ordinary matters are rendered meaningless if whistleblowers actually come forward in good faith with information concerning an extraordinary matter and are allowed to be vilified, threatened, publicly ridiculed, or — perhaps even worse — utterly abandoned by fair weather whistleblower champions. It is precisely when the stakes are highest, and the conditions searing, that public officials must well and faithfully discharge the duties of their offices.”

Atkinson — who was the first to alert Congress last September about an “urgent” complaint he received from an intelligence official about Trump — wrote the letter in response to Schumer’s request one month earlier that all inspectors general investigate “instances of retaliation against anyone who has made, or in the future makes, protected disclosures of presidential misconduct.”

Trump waged rhetorical war on the whistleblower last fall, calling for the anonymous official to be “exposed” and “questioned,” while accusing him of having “ties to one of my Democratic opponents” and perpetrating a “hoax.” Some lawmakers used closed-door hearings during the impeachment probe to gather information about the whistleblower and get his alleged identity into the congressional record.

Even Sen. Chuck Grassley (R-Iowa), who has had a reputation for protecting whistleblowers, initially cast doubt on whether the whistleblower at the center of Trump’s impeachment deserved to be treated as one. “If they are not really a whistleblower, they don’t get the protection,” he said in September. He changed his tune in a later statement, saying “this person appears to have followed the whistleblower protection laws and ought to be heard out and protected.”

Trump, for his part, continued the attacks during a press briefing on Saturday, saying that someone should “sue [the whistleblower’s] ass off.”

As for Atkinson, “I thought he did a terrible job. Absolutely terrible,” Trump said. “He took this terrible, inaccurate whistleblower report and he brought it to Congress.”

National security attorneys and intelligence community veterans have long expressed concern that Trump’s comments will have a chilling effect on future whistleblowers who witness government misconduct.

To that end, Atkinson in his March letter reaffirmed his commitment to strengthening whistleblower protections via the ICIG’s Whistleblowing Program, and revealed that the ICIG had begun an awareness campaign at the Office of the Director of National Intelligence (ODNI) “to inform the ODNI’s workforce of their legal right to make protected disclosures anonymously and free from reprisals.”

But Atkinson was permanently sidelined by Trump on Friday night — he was placed on administrative leave until his firing is made official in 30 days, which is the required amount of notice Trump was required to give the congressional intelligence committees of Atkinson’s removal.

Atkinson’s ouster follows that of former Acting DNI Joseph Maguire, who was fired after his staff briefed members of Congress about Russian interference in the 2020 campaign. Maguire was replaced in the acting role by Richard Grenell, Trump’s fiercely loyal ambassador to Germany.

Weeks into the job, Grenell has plowed ahead with a series of internal changes despite the president announcing a permanent pick for the director of national intelligence post, Rep. John Ratcliffe (R-Texas), whose confirmation hearing has been delayed due to the coronavirus pandemic.

On Saturday, the office of the director of national intelligence announced that Thomas Monheim, who has served in top legal positions throughout the intelligence community, was named acting inspector general.