A slew of hotels are heeding cities’ pleas for help. Trump’s aren’t. 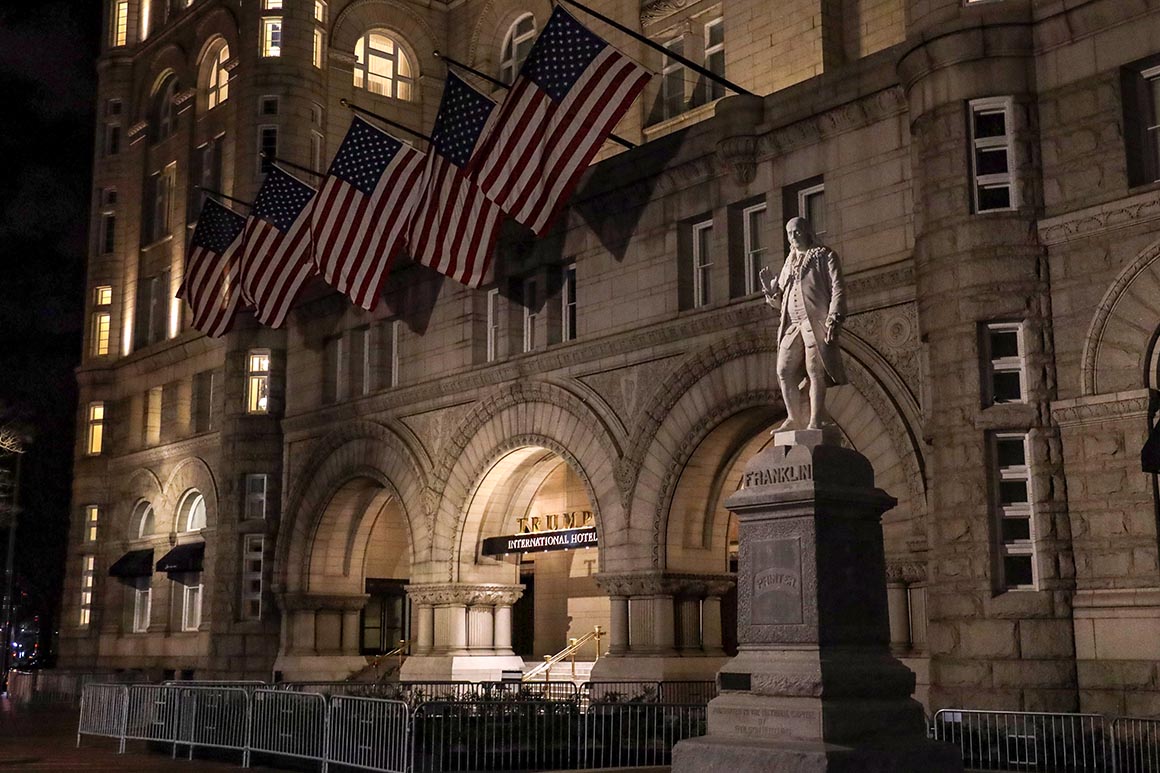 It’s a situation playing out across the country. In the seven American cities with Trump luxury hotels, no local officials said the Trump properties were in discussions to house overflow patients or medical personnel.

In three cities — New York, Chicago and Washington, D.C. — the president’s properties are still open, even though they have few guests, according to hotel, union and city officials and industry representatives. In four other cities — Las Vegas, Miami, Honolulu and Charlottesville, Va. — Trump’s properties are closed.

The Trump hotels aren’t alone. Thousands of hotels in New York and elsewhere have not responded to the voluntary requests of local and state officials, though they could do so later as the outbreak grows. Hotels that are used for shelters or housing — as opposed to hospitals — might even be able to keep some employees on staff.

“The city is actively working to expand our hospital capacity and increase the number of beds as quickly as possible,” said Omar Bourne, press secretary at the New York City Emergency Management Department. “We are exploring all options, including using hotels as medical surge facilities.”

At the White House podium, Trump has repeatedly praised private businesses for their assistance in helping the federal government fight coronavirus — talking up projects to help people get tested, efforts to overhaul assembly lines to make much-needed medical supplies and projects to feed children who are home from school.

The White House’s official Twitter account has even praised hotels for housing medical workers during the pandemic. “Thank you to hotels around the country for providing healthcare workers and first responders a place to stay while they’re on the front lines of the pandemic,” the post read. 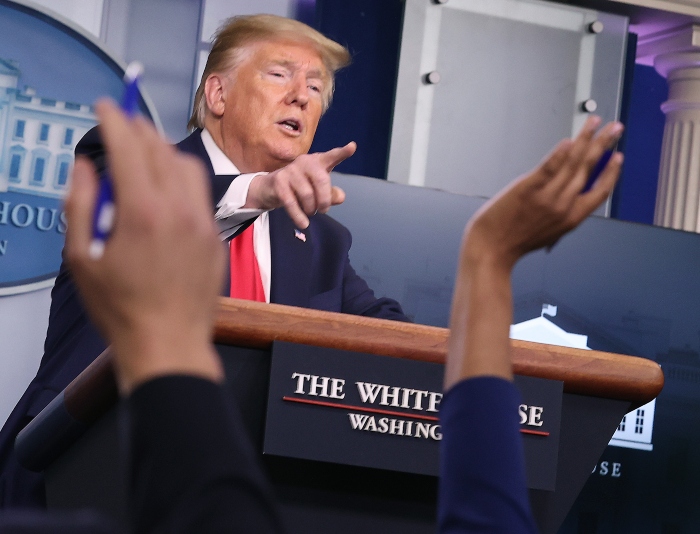 Yet the president’s own businesses have not yet stepped into the breach, a fact Trump’s critics were quick to pounce on but that most state and local officials didn’t want to directly address.

“It’s entirely unsurprising,” said Rep. Jamie Raskin (D-Md.), a House Oversight Committee member who has pushed for investigations into whether Trump’s businesses are illegally profiting from U.S. taxpayers and foreign governments. “It never occurred to me the business would engage in philanthropic activity.”

Many of Trump’s U.S. businesses have either partially or completely shut their doors, likely costing his family millions of dollars even as they laid off or furloughed thousands of employees. Forbes estimated last week Trump’s net worth dropped $ 1 billion because of the coronavirus. About three-quarters of his revenue in 2018 came from his hotels, resorts and golf clubs, according to his most recent financial disclosure.

It’s the same fate that has met the hospitality industry more broadly, as government officials have urged most of the country to stay at home for the foreseeable future. Most properties have had to lay off or furlough large swaths of their workforce and hope that emergency government funding can help weather the economic downturn. Half of all hotel jobs in the country will be lost during the coronavirus pandemic, according to the American Hotel & Lodging Association. Executives of leading hotels recently met with Trump at the White House to ask the federal government for $ 150 billion in emergency funds.

In the meantime, some properties have started working with the government to see how they might be able to assist with the space shortages that have arisen during the coronavirus pandemic. While far from being a moneymaker, it’s a move that could help the struggling businesses possibly blunt some losses while offering a public service during a moment of crisis.

“We are … always looking for other hotels that would be interested in participating should the needs of our community change,” said Jared Elli, director of communications at Hawai‘i Lodging & Tourism Association, which is working with the Honolulu government.

The Trump Organization did not respond to a request for comment. But in a previous statement to POLITICO, Trump’s son Eric Trump, the company’s executive vice president, said: “The safety of our members and guests are of our utmost importance. We are monitoring all of our businesses closely and are following the guidelines provided by the CDC.”

The Trump properties that have chosen to stay open are not doing so to make money.

“There’s no business reason for” staying open, said a union official familiar with the situation. “They’re trying to support what the president is pushing from the podium.”

Before Trump was sworn into office, he ignored calls to fully separate from his namesake company, which comprises more than 500 businesses. Instead, he placed his holdings in a trust designed to hold assets for his benefit. He can withdraw money from it at any time without the public’s knowledge.

Some Trump properties were initially slow to respond to government calls to limit business activities that involved large gatherings of people. In some places, there were still ongoing promotions for large group activities, such as rounds of golf, banquets and spa services, even after social distancing rules guidelines were widely adopted.

Trump talks daily about reopening businesses as soon as possible to help restore America’s faltering economy, despite public health officials warning that the economy might be stagnant for weeks to come.

“The cure cannot be worse than the problem itself,” Trump said Saturday. “We’ve got to get our country open.”

The Trump International Hotel in Washington, which leases the building from the federal government, remains open even though only about 2 percent to 3 percent of its 262 rooms are occupied, according to John Boardman, executive secretary-treasurer of the D.C. affiliate of Unite Here, which represents about 172 employees at the hotel. About 160 employees, including bartenders, housekeepers and doormen, were laid off, he said.

The 1,282-room Trump International Hotel Las Vegas, situated above the Las Vegas Strip, closed three weeks ago, though residents who live in adjoining condos can still access the building, according to Bethany Khan, spokeswoman for the Culinary Union, which represents about 500 employees at the hotel. Nearly all of the 500 workers at the facility were laid off, she said.

Local officials in Washington, Las Vegas, Miami and Charlottesville, which is located at Trump Winery, are collecting names of hotels to be used as needed as the virus spreads, according to local and union officials.

Carlos Gimenez, the Republican mayor of Miami-Dade County, said Trump National Doral Miami, the sprawling 643-room resort where the president wanted to hold the G-7 world leaders’ summit before he backtracked amid criticism, would be conducive to housing patients. But he has not heard the possibility mentioned.

“That Doral hotel has got a bunch of different little hotels,” Gimenez said. “That actually may work out pretty well for that purpose. So I’m not sure that they’re going to use the Trump hotel. But I could see that that would work pretty well.”

Gimenez said the Army Corps of Engineers will visit South Florida to look at hotels that could be used to house patients or medical personnel. Miami-Dade has more than 100 cases and is supposed to soon become one of the nation’s hot spots. It has a field hospital ready for use at the fairgrounds, and a second field hospital planned for the Miami Beach Convention Center if needed.

In other cities, hotels are already being used.

In New York, the epicenter of the coronavirus in the U.S. and home to Trump International Hotel and Tower, Gov. Andrew Cuomo and New York Mayor Bill de Blasio, both Democrats, have asked hotels to help as the city looks to triple it’s existing 20,000 hospital beds by May.

More than 20 hotels have volunteered thus far, but more are needed to match the estimated 78,000 infected residents, thousands of whom are likely to need hospital care. The federal government is building temporary hospitals at the Jacob K. Javits Convention Center as well as other locations. The Navy hospital ship Comfort also docked in the city and has been approved to take on coronavirus patients.

Cuomo thanked some hotels, including the Plaza Hotel and St. Regis New York, by name in a March 26 tweet. “Proud to see NY’s hotels stepping up!” he wrote.

In Chicago, Mayor Lori Lightfoot, a Democrat, announced hotels would be available starting last week for first responders as well as patients who have tested positive but do not require acute care.

They include the Hotel Essex London House, the Godfrey Hotel and Hotel One Sixty-Six, according to Eugenia Orr, the mayor’s deputy press secretary. The 92-story Trump International Hotel & Tower Chicago, which has 339 rooms, is situated near those downtown hotels.

Participating hotels in Chicago will receive a base rate to pay for the cost of labor and operations. “Hotels aren’t making a profit,” said Michael Jacobson, the president and CEO of the Illinois Hotel & Lodging Association.

In Honolulu, hotels began housing first responders on Monday, with an emphasis on nurses and doctors, as part of a statewide program dubbed "Hotels for Heros."

Some Hawaii hotels have chosen to remain open for business, but the majority of them have closed, said Marisa Yamane, a spokeswoman for the Hawaii Tourism Authority.

“At this time, people should not be visiting Hawaii for a leisure vacation,” she said.

The Trump International Hotel Waikiki, located steps away from the sand, is not listed on the authority’s list of closed hotels but the hotel indicated it is open only for those who live in the building’s condos.

Marc Caputo and Shia Kapos contributed to this report.