A watchdog out of Trump’s grasp unleashes wave of coronavirus... 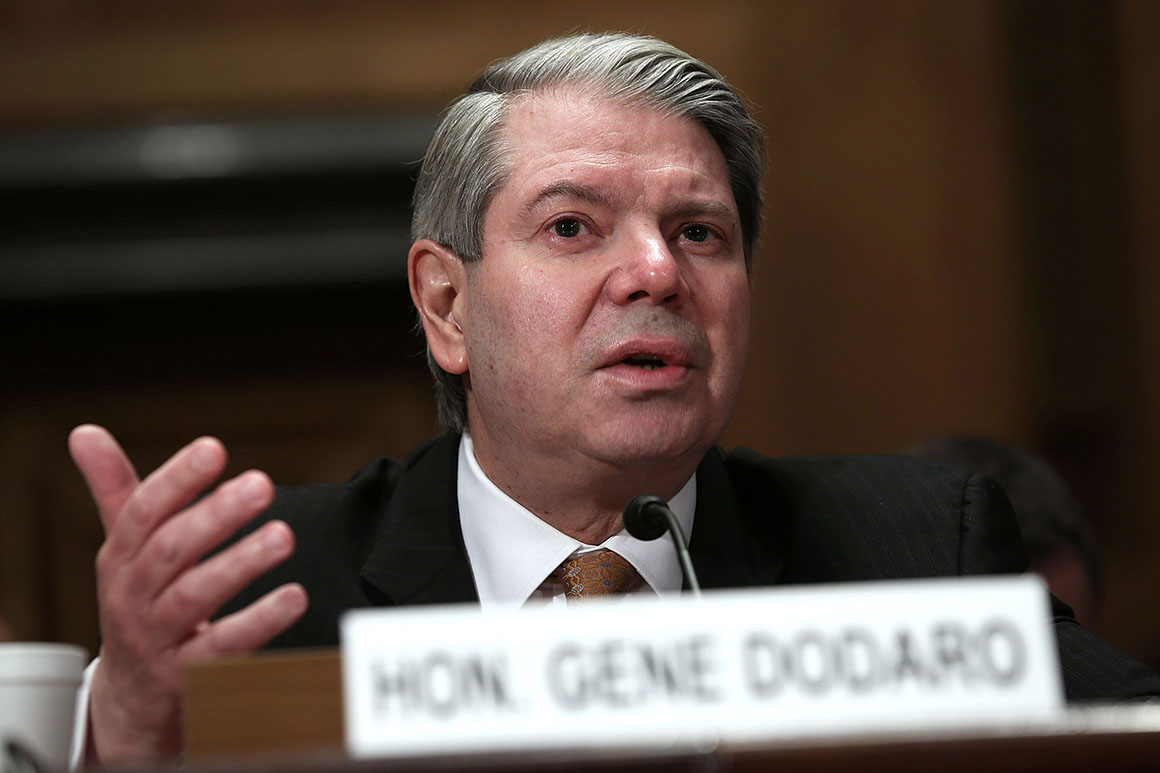 Lawmakers handed President Donald Trump $ 2 trillion in coronavirus relief — and then left town without activating any of the powerful new oversight tools meant to hold his administration accountable.

But with little fanfare, Congress’ independent, in-house watchdog is preparing a blizzard of audits that will become the first wide-ranging check on Trump’s handling of the sprawling national rescue effort.

And even as Trump has gone to war against internal watchdogs in his administration, the Government Accountability Office remains largely out of the president’s grasp because of its home in the legislative branch.

The GAO has quickly taken advantage of its perch, exploring the early missteps inherent in launching a multitrillion-dollar law that touches every facet of American life. By the end of April, at least 30 CARES Act reviews and audits — "engagements," per GAO lingo — are expected to be underway, according to interviews with senior investigators.

Topics will range from the government’s handling of coronavirus testing to its distribution of medical equipment, and from the nation’s food supply to nursing home infections and any missteps in distributing the emergency cash payments that began landing in millions of Americans’ bank accounts this week. The office’s top fraud investigator said it’s already received a complaint about a check landing in the account of a deceased person.

“We’re moving forward very quickly,” said Angela Nicole Clowers, chief of the GAO’s health care unit. “We’re an existing institution and have a lot of institutional knowledge about all these programs. It gives us sort of a leg up.”

At a time when Trump has sought to undermine nearly every independent review of his administration’s conduct, the GAO is likely to dispatch most of its 3,000 investigators, experts and analysts into an arena that could make it a target for the president’s fury. And its quiet early work could soon become very loud: The office is required under the new law to brief Congress every month and issue a bimonthly public report on its findings.

But as an independent agency that works for Congress — not the president — the GAO has far more protection from Trump. A nonpartisan entity responsive to both Democratic and Republican requests for investigations, the office is also more insulated from partisan attacks than the traditional congressional committee investigations that Trump has stonewalled to the brink of irrelevance.

The office’s head, U.S. Comptroller General Gene Dodaro, first started in the role in 2008 and was confirmed unanimously to the position in 2010 for a 15-year term, a lengthy tenure meant to protect against politics seeping into the post.

And the GAO will enter the fray with reinforcements at its disposal: The CARES Act provided a $ 20 million funding boost and the agency is now deciding where to target the funds to add auditors and experts who can aid its work.

“Within GAO, we have everyone from policy analysts or public policy people like myself,” Clowers said, “we have nurses, we have scientists, we have engineers, we have lawyers. You sort of name an occupation, we have ’em.”

With other oversight mechanisms established in the CARES Act languishing — or stymied by Trump — the GAO, at least for now, is on its own.

The GAO also has the benefit of having analyzed the federal response to the 2008-09 financial collapse, a similarly far-reaching effort whose successes and failures are now informing the office’s handling of coronavirus oversight.

“Things are always shifting and changing as the agencies shift and change to the evolving pandemic needs,” Clowers said, comparing it to the breakneck pace of the response to the financial meltdown. “We have experience doing that. We try to be as nimble as possible.”

Trump has already tangled with the GAO during the most perilous moment of his presidency, and the agency does face some hurtles in investigating him.

The office probed his decision to delay $ 400 million in military aid to Ukraine and found that he violated the law by failing to inform Congress of the move. It was a politically explosive finding even if Republicans largely ignored it during the impeachment trial. GAO also noted that the White House budget office and State Department were largely uncooperative in the probe — and the administration could impose similar limitations in its coronavirus work.

Clowers argued the GAO’s strong relationships with the agencies it oversees should minimize similar resistance to coronavirus relief oversight. The office has already been coordinating its efforts with internal agency watchdogs to ensure they bolster, and don’t duplicate, one another’s efforts. Clowers said she’s spoken with the inspectors general at the departments of Health and Human Services and of Veterans Affairs.

That’s allowed audits and investigations to begin even as the other policing bodies set up in the CARES Act are stuck in neutral.

Congressional leaders have yet to appoint a chair to lead a five-member commission meant to monitor a new $ 500 billion Treasury fund for distressed industries and companies. Trump nominated a White House lawyer to fill a newly created watchdog post to oversee the same $ 500 billion fund, but the choice has generated controversy and is unlikely to see confirmation for weeks.

And earlier this month, Trump upended a newly created committee of existing inspectors general — granted broad power to oversee the massive rescue package — when he effectively ousted its chairman and left the panel scrambling to regroup.

Speaker Nancy Pelosi has proposed creating a new bipartisan House committee to conduct oversight of the CARES Act, but it likely will need a House vote to be established and won’t launch for weeks since Congress is recessed until early May at least. Other congressional committees are holding telephone conferences with senior federal officials and attempting to wrest crucial information from the notoriously tight-lipped administration. But they’re finding it extremely challenging to put the squeeze on Trump from afar.

That’s left the GAO, which has existed in its current form since the Nixon era, standing as the only fully functioning oversight mechanism empowered to watch Trump’s handling of the new law. And it’s taking requests: The agency prioritizes reviews required by laws such as the CARES Act but it also handles asks from congressional committees — giving equal weight to requests from either party.

And in a rare example of unity, Republicans and Democrats have both hailed the office as a valuable nonpartisan overseer that has served both parties well.

Sen. Chris Van Hollen (D-Md.), who requested the office’s review of Trump’s handling of Ukraine aide, said the GAO is as important as ever in its role as coronavirus relief monitor. Notably, it has subpoena power as well as routes to circumvent Trump blockades by pursuing records from states, companies and other entities that receive coronavirus funds, not just agencies that dole it out. And Van Hollen said Congress might even consider empowering GAO further.

“We may need to strengthen GAO’s arsenal going forward,” he said. “They can bring lawsuits and seek court orders to provide information but those can be a long process. We may need to allow them to expedite that process to enforce their subpoenas.”

Other lawmakers emphasize that the real-time work by GAO is a slight shift from its normally long-term top-to-bottom reviews. The office is slated to confer with the House Energy and Commerce Committee about how it will provide its analyses and reports to Congress and what details they’ll include.

“GAO is always significant,” said Rep. Greg Walden (R-Ore.), the top Republican on Energy and Commerce. “Their expertise and resources is a major asset that our committee taps often.”

In the early weeks of CARES Act implementation, the office’s fraud unit is counting on witnesses to potential fraud to come forward proactively. That was the case, said Howard Arp, the office’s fraud unit chief, when someone recently reported the delivery of a coronavirus cash payment to the account of someone who died in 2019. The one-off error is already prompting a wider look at whether this could become a systemic issue.

“Thankfully, that family was nice enough to return the fund,” Arp said in an interview. “That then causes us to start asking questions. How could that happen? What control was missed? That is already starting.”

There is anecdotal evidence that the matter has cropped up more than once: Rep. Thomas Massie (R-Ky.) indicated he was told of a similar error from a friend, and similar stories made the rounds on Twitter.

In fact, under the structure of the law, the IRS is set to send money to anyone who filed a 2018 or 2019 tax return, so more dead people are likely to be receiving funds. Tens of thousands of the departed also received aid under the Obama-era recovery package because of a similar setup, though many checks were returned.

GAO relies on its anonymous reporting network known as FraudNet to receive tips and complaints about fraud or mismanagement of taxpayer dollars. Arp said GAO will aggressively market its existence in the early days of the CARES Act, and he said his unit will focus on areas of government that received massive infusions of funding and a short timeline to start spending it.

“Our pace has picked up,” Arp said.

GAO has already encountered one early, unavoidable roadblock to its investigations — one it hasn’t had experience with despite its long history. The agencies it oversees are largely working remotely because of the coronavirus threat. Arp said that this “environment of adjustment” may result in slowdowns in responses to GAO inquiries.

Clowers, too, underscored that widespread telework would limit one of GAO’s classic functions: site visits where “we go observe, we touch, we feel, we see.”

“Right now, we’re not able to do that,” she said, “but we’re leveraging technology to the extent we can.”