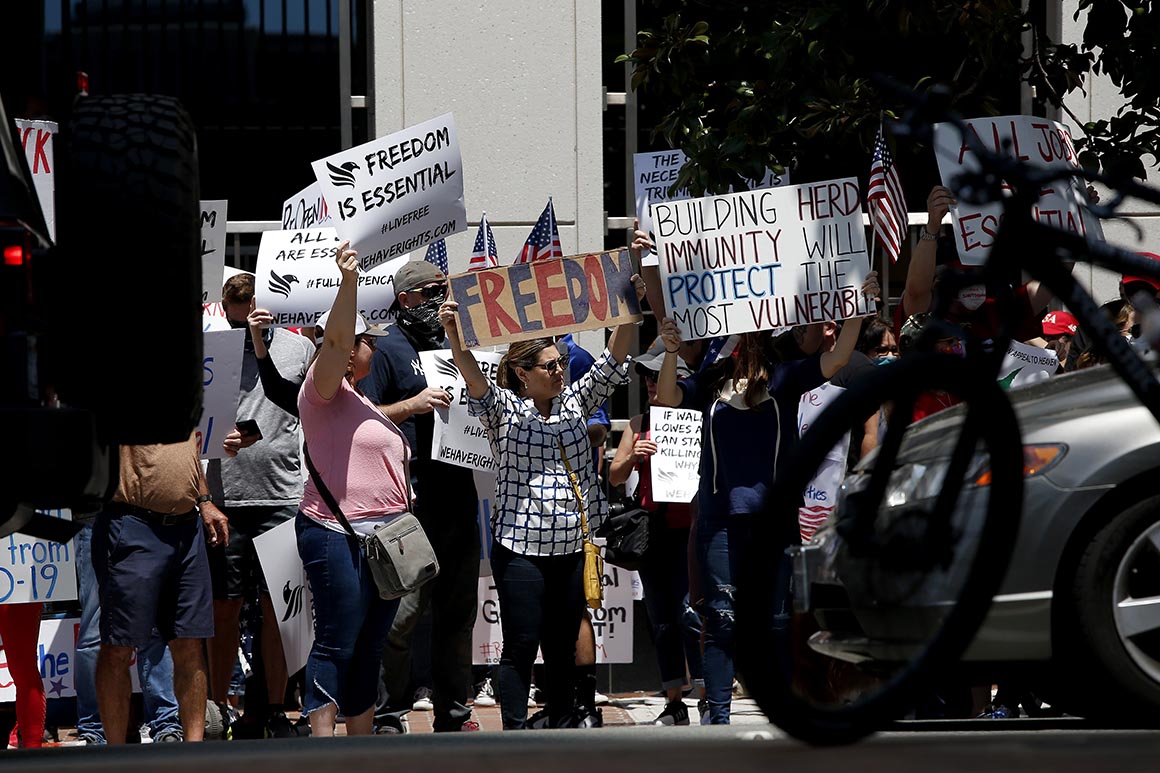 “Time will tell if this will turn into a tea party-type movement,” Hice said of the growing social unrest. “Part of me is hopeful this will begin a movement of Americans taking a stand for constitutional liberties that have been eroding for quite some time, but rapidly eroding through this pandemic.”

Yet for all the heated protests taking place — and as several states begin to wind down restrictions — the desire to immediately end the lockdowns remains a minority opinion. According to new polling, most Americans do not feel comfortable with their states reopening salons, gyms, movie theaters and other businesses.

That might explain why some Republicans have taken a more measured approach to the debate, acknowledging it’s difficult to strike a balance between public health concerns and the need to get the economy humming again. And even if the economy is technically reopened, it’s not clear there will be many customers if fear of the virus is widespread.

“No matter what decision you make, there’s going to be people second-guessing it,” said Sen. John Cornyn (R-Texas.), who is up for reelection this fall. “You need to do it gradually and you need to be careful. … We all know how to manage risks in our own life — that’s if we have good information and know how to do that. But right now people are being inundated.”

President Donald Trump — who has also encouraged protesters with tweets to “liberate” Democratic-run states — recently tapped a bipartisan congressional task force to explore ways to get the nation back to work. It’s a sign the White House wants some bipartisan buy-in for reopening the economy, one of the most consequential decisions that will be made during the pandemic.

Coronavirus casualties are still climbing, with over 80,000 Americans dead from the virus thus far. Republicans who have been clamoring to reopen the country have faced accusations from Democrats that they care more about the economy than people’s lives.

Many GOP lawmakers, however, counter that continuing the lockdown carries its own set of health risks, pointing to the increase in suicides and routine health exams getting pushed to the back burner.

“We need to get back to our way of life, because there are serious mental health issues,” said House GOP Whip Steve Scalise (R-La.). “You’re seeing suicides on the rise.”

Others have given more blunt assessments. Rep. Trey Hollingsworth (R-Ind.) told a local radio station last month that the health risks are the “lesser of two evils” compared with the economic damage from the virus.

Republicans have also begun to decry the stay-at-home orders as a violation of constitutional rights — a call to arms that plays directly to the right’s fears about government overreach.

“Power has gone to their heads, and they believe government is the answer to everything,” said GOP Rep. Debbie Lesko of Arizona, who accused Democratic Chicago Mayor Lori Lightfoot of going “ballistic” with her threats to jail people who violate social distancing orders.

Meanwhile, Hice and Biggs wrote a letter to Trump over Easter weekend voicing concern that virus-related restrictions on public gatherings are infringing on Americans’ religious freedoms. They’ve complained that in some places, you can buy alcohol and a lottery ticket but can’t attend your place of worship.

“Just because we have a pandemic does not mean our constitutional rights evaporate or disappear,” Hice said. “I believe there’s a tremendous abuse of civil liberties in certain cases across the country, and I’m hopeful some of these people will be held accountable.”