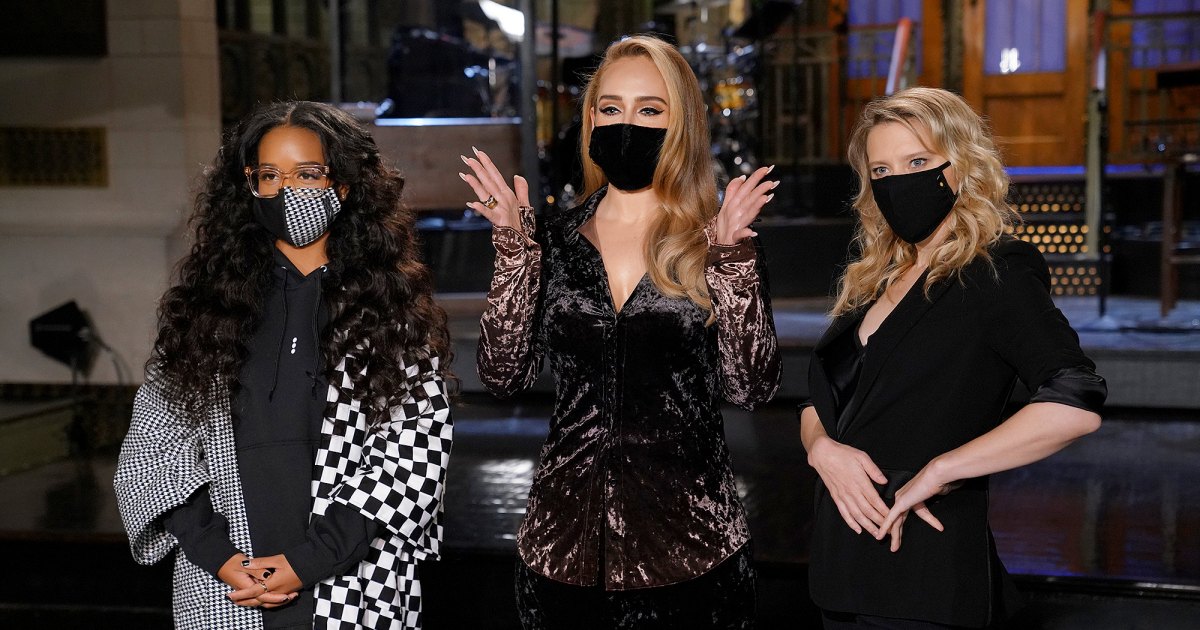 Her time to shine! After months without a solid update on Adele due to the coronavirus pandemic, fans finally received news about her next album and more during her Saturday Night Live hosting debut on Saturday, October 24.

The Grammy winner’s monologue covered several changes in her life, including her recent weight loss. “I know I look really, really different since you last saw me, but actually because of all the COVID restrictions and the travel bans, I had to travel light and only bring half of me, and this is the half that I chose,” she quipped.

Adele then gave her loyal followers a shred of hope for new music. “Now I know there’s been a lot of chatter about me just being the host. I’ve seen all of it. Like, ‘Why isn’t she the musical guest?’ and stuff like that, and there’s a couple of reasons,” she explained. “My album’s not finished, and I’m also too scared to do both. I’d rather just put on some wigs, and this [hair] is all mine by the way, have a glass of wine or six and just see what happens. Who knows?”

She’s Still Got It!

The songstress proved her talent has not gone anywhere during her time out of the spotlight. In a Bachelor-themed sketch, she competed as herself to find the next love of her life. “I’m here ‘cause I’ve had a lot of heartbreak in my life,” she told the camera. “First at 19 and then sort of famously at 21 and then even more famously at 25.”

Adele struggled to fit in with the other contestants, though, breaking into her hits “Someone Like You” and “Hello,” among others, every time a romantic development occurred.

The host could not contain her laughter during a travel commercial for Africa. She struggled to make it through her lines as she and Kate McKinnon discussed the features of the continent that drew her and other divorcees there.

Adele showed off her acting chops in a sketch with Pete Davidson (as recurring character Chad), playing a ghost haunting a home and seeking vindication following her murder.

McKinnon portrayed a fortune-teller warning a group of friends in 2019 what the next year held in store for them. Adele’s character refused to believe she would soon have a fascination with adult coloring books instead of going to museums and concerts as she and her pals remained unaware of the impending pandemic.

While Adele focused on her hosting duties, H.E.R. acted as musical guest with performances of “Damage” and “Hold On.”

Listen to Watch With Us to hear more about your favorite shows and for the latest TV news!