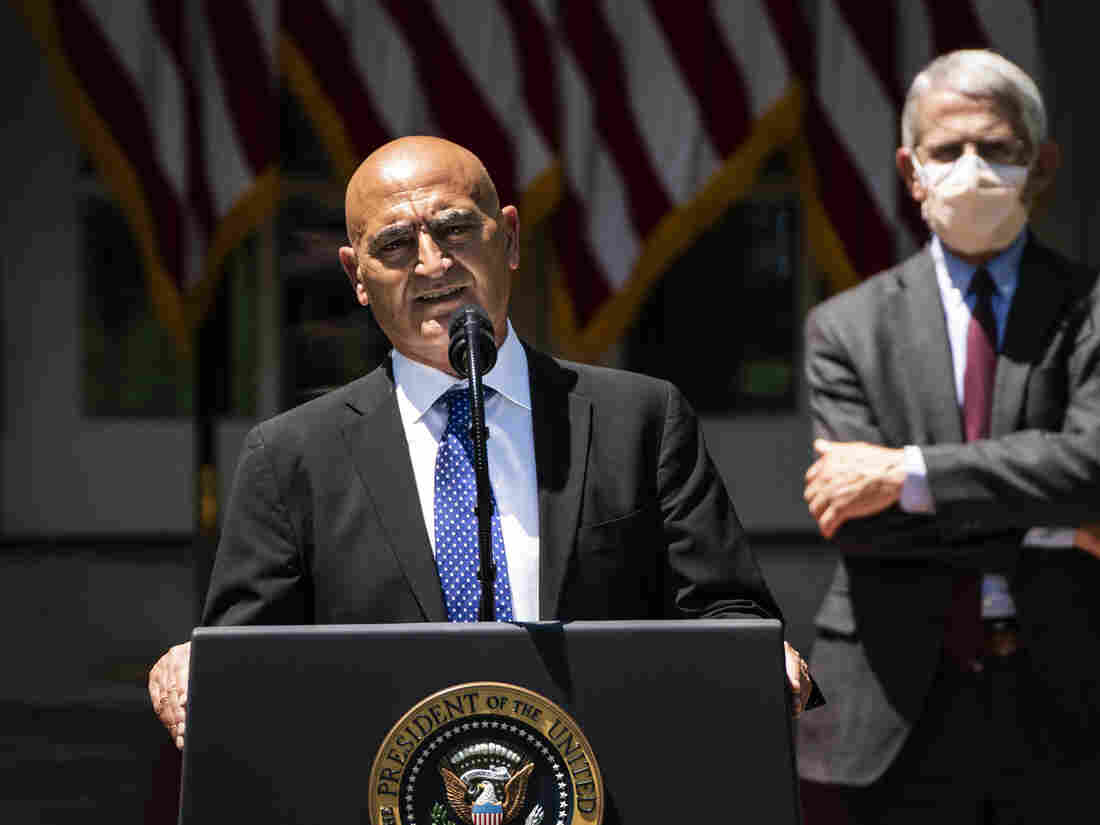 Moncef Slaoui, a former GlaxoSmithKline executive, speaks during the kickoff announcement for Operation Warp Speed in the White House Rose Garden on May 15. The Washington Post/The Washington Post via Getty Im hide caption 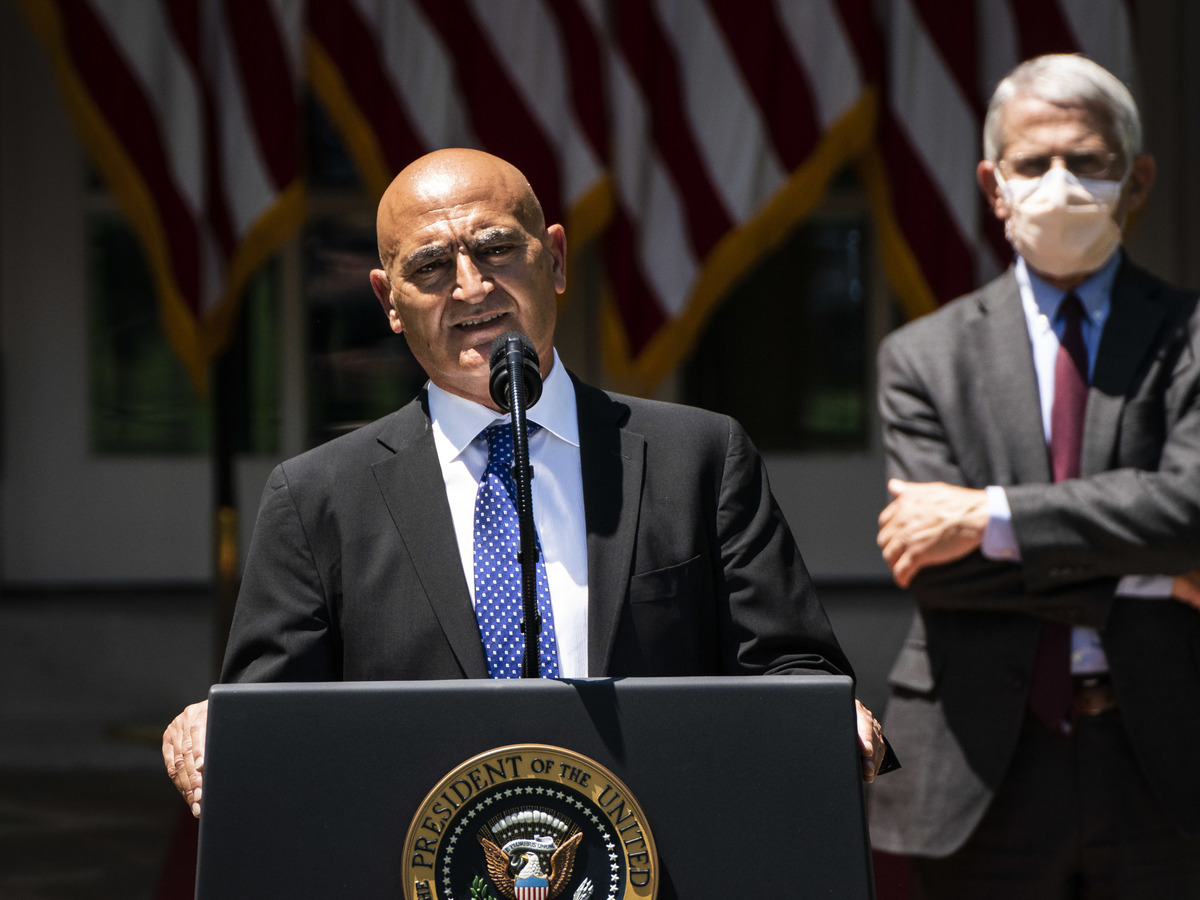 Moncef Slaoui, a former GlaxoSmithKline executive, speaks during the kickoff announcement for Operation Warp Speed in the White House Rose Garden on May 15.

The Department of Health and Human Services has released the contract of pharmaceutical industry veteran Moncef Slaoui, a key adviser to Operation Warp Speed, after questions from the press, members of Congress and advocacy groups.

Operation Warp Speed is the Trump administration’s multibillion dollar push to develop and manufacture hundreds of millions of doses of coronavirus vaccine. Slaoui has been instrumental in guiding the effort, but the terms of his employment raised concerns about potential conflicts of interest.

President Trump announced in May that Slaoui, former chairman for vaccines at GlaxoSmithKline, would be its chief scientist, calling him “one of the most respected men in the world in the production and, really, on the formulation of vaccines.”

But Slaoui was brought on as a consultant instead of as a federal employee. Slaoui’s consultant status means that Slaoui didn’t have to go through the standard Office of Government Ethics process for federal employees, which involves signing ethics agreements, disclosure of financial holdings and divestiture of anything that might pose a conflict of interest. Importantly, this information is available to the public.

For his part, Slaoui defended his status and role in Operation Warp Speed, saying in an emailed statement to NPR:

“I accepted this role out of a commitment to public health and to helping our nation and the world control this deadly pandemic. Throughout my career I have always held myself to the highest ethical standards, and that has not changed upon my assumption of this role. HHS career ethics officers have determined my contractor status, divestitures and resignations have put me in compliance with the department’s robust ethical standards.”

While the gist of much of Slaoui’s consulting agreement has emerged previously, the contract released to NPR lays things out in black and white.

The contract, dated effective May 18, showed that Slaoui had a financial interest in vaccine makers GlaxoSmithKline and Moderna. As a federal employee, he would have had to divest holdings like those or recuse himself from decisions that pose a conflict. As a consultant, he had the option of keeping them.

He also sat on the corporate boards of Artiza Biotechnology, Clasado Biosciences, Lonza, Moderna and ViceBio Limited, the contract documents show. And he was an adviser to BRII Biosciences.

An HHS spokesperson said in an emailed statement that Slaoui resigned from his board seat at Moderna and divested his equity holdings in the company. He “committed to donate to cancer research all incremental value accrued from his Moderna shares between the evening of Thursday, May 14, prior to the announcement of his position on Operation Warp Speed and the time of sale.”

Slaoui also “left all advisory boards and boards of directors of companies with even the appearance of conflict,” the statement said. That includes the board of Lonza, a contract manufacturer helping Moderna make its vaccine, before Slaoui received any equity in the company, according to a Sept. 23 letter from HHS to Rep. James E. Clyburn, D-S.C..

As for his GlaxoSmithKline shares, the contract says if they accrue more value than the average of a pharmaceutical stock index during his time at Operation Warp Speed, he will donate the difference to the National Institutes of Health.

Slaoui has said his stock in GlaxoSmithKline, his former employer, is his retirement, and declined to give it up. In late July, GlaxoSmithKline and Sanofi received a contract worth up to $ 2.1 billion Operation Warp Speed for their collaborative effort on a COVID-19 vaccine.

An HHS spokesperson said Slaoui’s expertise is “invaluable to the Board of Directors’ decisions, but he does not commit the government to any financial obligations. Operation Warp Speed’s investment decisions are recommended to, and approved by, the Operation Warp Speed Board of Directors (BoD) on a weekly basis. The BoD is composed of the Secretaries of HHS and DOD, in addition to White House COVID-19 Task Force personnel.“

The conflict of interest section repeats protections first disclosed by the House Select Subcommittee on the Coronavirus Crisis chaired by Rep. James E. Clyburn, D-S.C., in late September, when it got the information from HHS.

As for Slauoi’s compensation, the contract obtained by NPR says he is paid $ 1,000, not $ 1, as has been previously reported. Additional covered expenses include reasonable food, lodging and “coach economy class” travel.

In response to a question about the discrepancy in pay, the HHS spokesperson said in a written statement:

“Although the agreement lists a lump sum of $ 1,000, Dr. Slaoui never intends to submit an invoice to [Advanced Decision Vector, the outside firm administering his contract] for this lump sum. In the event that government contracting laws require ADV to deliver payment, Dr. Slaoui will donate the money to NIH for research, in accord with his previous statements of working for $ 1.00 salary. At this time, Dr. Slaoui has not received any payment in regards to this lump sum.”

Despite the protections laid out in the contract and Slaoui’s actions to minimize potential conflicts, Democratic lawmakers have criticized them as inadequate.

“Dr. Slaoui was hired as a contractor so that he could evade ethics laws and work on Operation Warp Speed without divesting from millions of dollars in financial conflicts,” Sen. Elizabeth Warren, D-Mass., said in an emailed statement to NPR. “His meager salary is the tell that reveals how valuable and important it is for him to use this bogus contracting scam as a way to maintain those conflicts.”

HHS sent NPR the contract after a request for comment on a set of letters from members of Congress, who were seeking the contract from the department.

In it, they say HHS downplayed Slaoui’s role to justify his status as a contractor, citing a New York Times interview with reporter Kara Swisher published on Oct. 5. When pressed about his role, Slaoui told Swisher, “I’m not a decision-maker. But of course, there is significant influence.”

“This is a textbook case of a conflict of interest that could affect key decisions and damage OWS’s scientific integrity and the race for a vaccine more broadly,” the legislators wrote.

In his statement to NPR, Slaoui said:

“I have seen the letter from Senator Warren et al yesterday and appreciated the shared commitment to my being involved. I concur with the need to be transparent about potential conflicts of interests and I will provide information that addresses her questions. I have made the same commitment to Chairman Clyburn in our Tuesday, October 27th meeting.”

Attorney Franklin Turner, a partner at McCarter and English who specializes in government contracts, said Slaoui’s terms don’t raise any red flags for him, though he noted that the statement of work section was quite short. “It’s not entirely atypical to see something like this, particularly with respect to an individual with this man’s level of expertise and knowledge in the field in light of the compressed time schedule,” Turner said.

“On its own, this agreement contains the standard sorts of protections, the standard type of language that consultants to federal contracts have,” he said, adding that this contracting mechanism was likely quicker than hiring Slaoui and putting him through the Office of Government Ethics’ process.

Separately, Warren and Porter also wrote a letter to Inspector General for the General Services Administration, Carol Ochoa. They asked her office to investigate the contracting process, and whether Slaoui and others contracted through Advanced Decision Vector, the outside firm, are “acting consistent with federal law as a contractor, or whether they have been misclassified and should in fact be serving as federal employees.”

Advanced Decision Vectors did not respond to NPR’s request for comment.

Michael Bars, a White House spokesman, called the legislators’ letters “false, politically motivated attacks,” in an emailed statement. “With four vaccine trials in phase three and additional trials nearing this critical stage, we are grateful for Dr. Slaoui’s invaluable contribution to ensure Americans have access to a safe and effective coronavirus vaccine and treatments as soon as possible.”