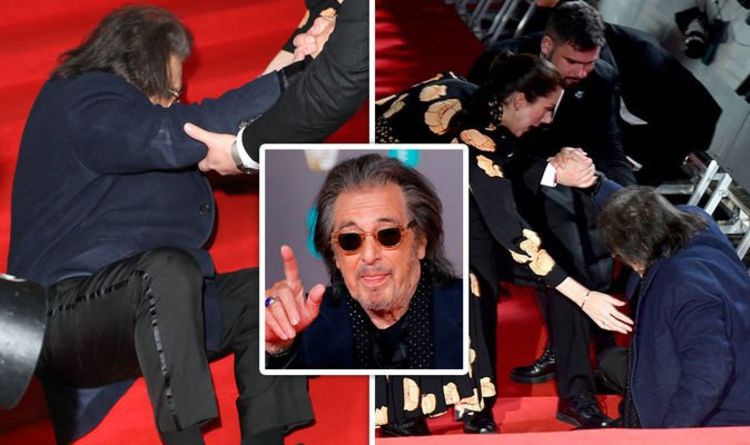 Al Pacino suffered an unfortunate mishap as he fell to the floor at the EE British Academy Film Awards 2020. The actor, who is nominated for his role in Netlix’s The Irishman, which co-stars Robert De Niro, took a tumble on the stairs outside the awards ceremony at London’s Royal Albert Hall.

He was pictured being helped up by fellow attendees who clutched onto his hand to aid him in getting back on his feet.

His girlfriend Meital Dohan, 40, rushed to offer her hand to her partner and looked on with concern.

Meital looked shocked when she noticed her boyfriend had fallen over, but fortunately, the Hollywood star didn’t appear to have sustained any injuries.

Al Pacino is in the running to pick up the gong for Best Supporting Actor at the awards show tonight.

The Godfather actor dressed to impress for the BAFTAs in an all-black suit, which he paired with a navy blue jacket.

He accessorised with a black scarf, covered in sparkling embellishments.

During an interview with the BBC at the event, he spoke about what it’s like to work with Robert De Niro.

He admitted his memories of the time are “somewhat vague” in a cheeky comment.

The Hollywood favourite quipped: “That was in the ‘70s, my memory of the ‘70s is somewhat vague, but I was there, I know that.”

However, the actress risked revealing too much in her plunging gown as she appeared to go braless for the event.