Alex Jones cut off after ‘drunk’ guest throws The One... 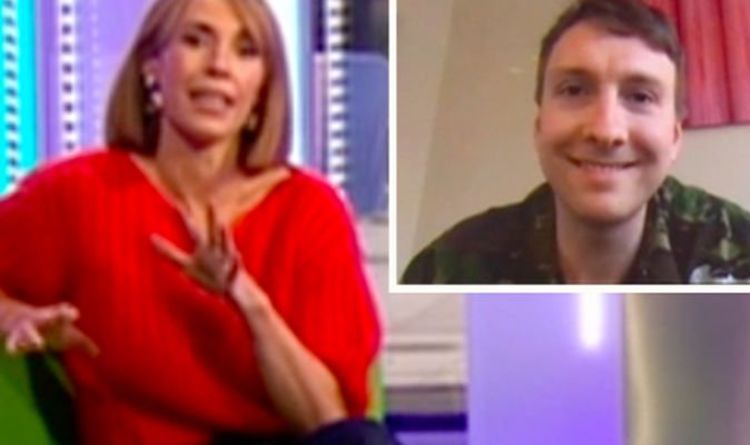 The One Show’s Alex Jones was joined live in the studio last night by former Strictly Come Dancing star Alex Scott MBE to help host tonight and the two were working hard to try and bring some positivity to viewers amid the ongoing coronavirus panic. The two spoke to the likes of Lenny Henry and Angela Scanlon, but Alex Jones was cut off by guest Hugo Boss, formerly known as comedian Joe Lycett, after the host got his name wrong throwing the show into pandemonium.

Alex welcomed Joe Lycett to The One Show tonight who joined via video link, but it quickly became clear that the hosts had made a bit of a blunder.

“Hello, I am also drinking,” said the guest as he held up a pint of beer from his home.

Alex Jones said: “Isn’t it funny how the rulebook goes out the window, it’s a free for all.

“Joe, can you just show us where you are. Are you in your living room? what’s going on?”

But the host was quickly cut off and the guest corrected the host.

He said: “Can I just clarify, my name isn’t Joe Lycett anymore -”

Hugo continued: “Just in case because I am not sure your viewers entirely know what’s going on.

Hugo went on to explain that he changed his name a couple of months ago after the global brand Hugo Boss was allegedly sending cease and desist letters to any company with the word ‘Boss’ in the title.

At the time Hugo posted that a small company in Swansea called Boss Brewing had been stuck in a very expensive legal battle with fashion house Hugo Boss.

The small company had nearly gone bankrupt from the legal fees and to show support and also get Hugo Boss’ backs up, Joe Lycett legally changed his name to Hugo Boss also.

But the show was thrown into chaos when the comedian was unable to get over the fact that he could see himself on The One Show on his TV but also he was talking to The One Show via his camera.

Later in the show, he made a rather dramatic admission that despite being live on the BBC show, he might also be drunk.

Alex Jones said: “And you will soon be back on The Great British Sewing Bee on BBC Two as well.

“And we have it on good authority that you have taken quite a shine to this man in the picture.”

Alex showed a picture of Hugo and Sewing Bee judge Patrick Grant and Hugo said: “Can you explain the picture? Oh wait, I can see it on my telly now.

“And I’m, and I’m drunk,” he said as he took another swig from his pint, leaving the hosts in hysterics.”