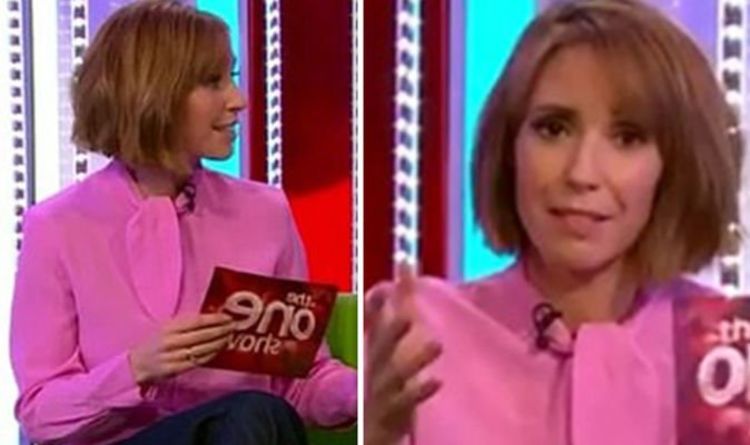 Alex Jones, 43, was joined on the sofa by co-host Patrick Kielty, 49, on Thursday’s episode of The One Show. But the pair sparked a social media frenzy after viewers complained the presenting duo should be practising social distancing following the coronavirus crisis.

It comes as Alex and Patrick introduced the show as normal, sitting quite close together on the sofa.

The UK is currently being advised to keep their distance from people and remain indoors amid the recent surge in coronavirus cases.

Alex was quick to react to viewers’ concerns as she admitted it was “hard to break habits”.

“Now we are having a lot of emails from viewers about social distancing and that we’re are quite close together,” she explained as co-star Patrick moved further away from her.

“We hear you and we’ve moved apart.”

Alex continued: “It’s just hard to break habits. That’s what it is. We’re so used to sitting together but you’re absolutely right.”

Some viewers took to social media to criticise the seating arrangements, with one user saying: “No social distancing on The One Show. Come on show some leadership. At least one metre between people, but preferably two metres.”

Another person commented: “Why are they sitting so close together? The presenters facing each other when they speak so close #TheOneShow #COVID19.”

While a third person remarked: “Someone tell Alex and Patrick to not sit so close! #TheOneShow.”

“Immediately after a government message about the Coronavirus, these two are on the sofa next to each other. Great job promoting social distancing #TheOmneShow #coronavirus,” another viewer added.

Alex and Patrick were joined on the programme by former Inbetweeners actress Emily Atack.

Meanwhile, the Welsh presenter’s regular co-host Matt Baker was a no-show on the programme.

It comes after the Countryfile presenter announced earlier this week, he was self-isolating after a family member had shown signs of the coronavirus.

However, Matt has now claimed he may have contracted COVID-19 after displaying symptoms.

Reporting via a video link to the studio, Matt was sitting with his pet dog at his home as he has been for the majority of the week.

The presenter began by explaining he had some of the symptoms linked with coronavirus, such as a dry cough.