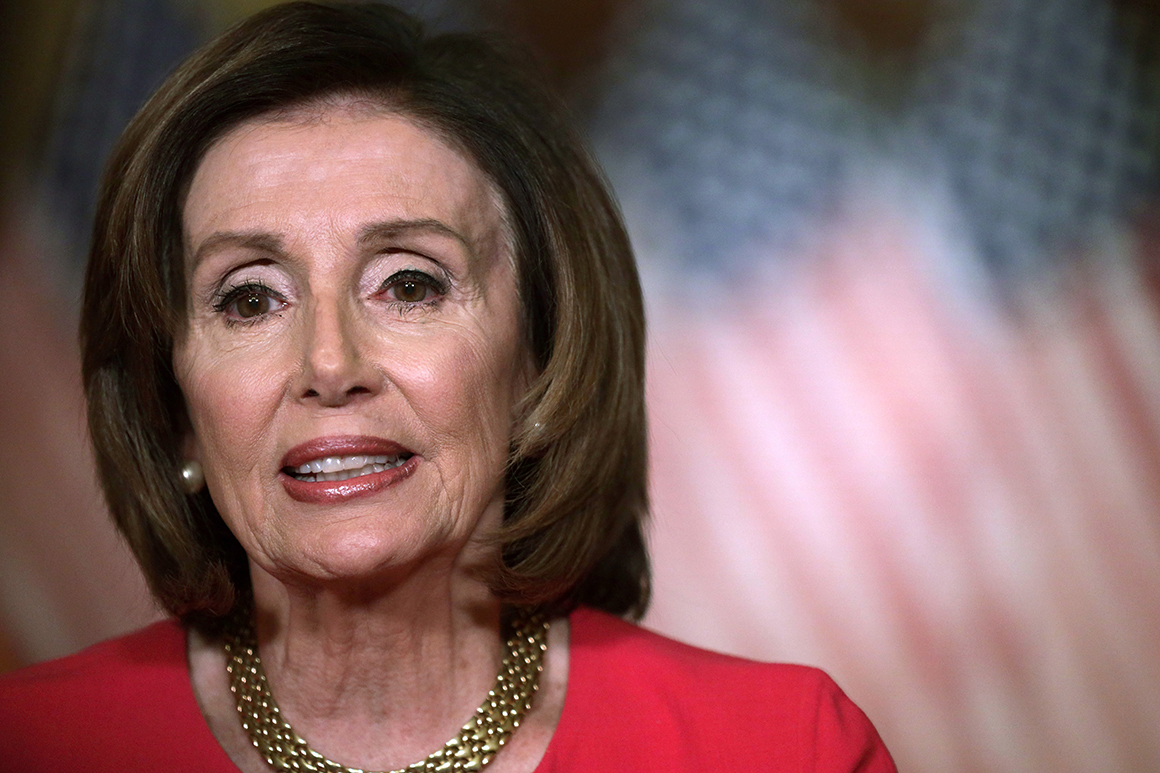 Speaker Nancy Pelosi lashed President Donald Trump during a private call with her caucus Monday, saying he was putting Americans in grave danger if he rushes to reopen the economy at the end of this month.

Pelosi sharply criticized Trump’s handling of the coronavirus outbreak, telling Democrats it was “almost sinful” how his administration had failed to live up to promises to make testing available to all Americans and quickly address the mask, gown and glove supply shortage in hospitals across the country.

“The more misrepresentations he puts out there, the more it obscures the truth,” Pelosi told Democrats, according to multiple sources on the call. “We have to insist upon the truth — what they’re saying is not knowledge, is not facts, is not real.”

Pelosi returned to her criticism of Trump multiple times during the two-hour call, saying without a plan for adequate testing and contact tracing, it would be impossible for the president to guarantee Americans a safe reentry into their normal life.

The California Democrat said it was up to Democrats to speak out about the administration’s missteps, calling the lack of national testing and protective equipment for medical providers months after the first U.S. coronavirus case “a complete failure.”

“And we cannot let them lie about it,” she added, according to Democrats on the call.

Pelosi’s criticism of Trump comes as White House officials have signaled they are hoping to reopen the economy as early as May 1 — a timeline that has alarmed Democrats and public health experts alike.

With the U.S. caseload still growing in mid April, several senior House Democrats have called for Congress to come up with its own plan to reopen the nation, rather than relying on the White House.

"Basically we’ve been operating without a national plan and the administration just veers from one set of talking points to another without giving us a plan,” Rep. Jamie Raskin (D-Md.), one of the co-sponsors, said in an interview Monday.

The plan, pitched by Raskin and several other Democrats, would ask each state to submit a plan on how to reopen businesses and schools in consultation with the Department of Health and Human Services — not just the president’s pulpit. And after the reopening, it would also require adequate testing and contact tracing to prevent a second outbreak.

"Our point is that we need a serious structure and process in place in order to institute a reopening that will be safe and enduring,” Raskin said, calling the president’s initial hopes to reopen the country on Easter “patently ridiculous.”

Democrats have feared for weeks that Trump, under pressure ahead of his reelection bid and a worsening economy, might move too quickly to encourage people to return to work and school.

“It is painfully clear that the combination of wishful thinking and chaotic policy choices will never end the crisis,” the lawmakers wrote in a “Dear Colleague” letter to fellow Democrats.

States have mostly signaled they will move at their own pace. On Monday, the governors of several hard-hit Eastern states have announced that they will work together to draw up gradual plans for reopening. The states are New York, New Jersey, Connecticut, Pennsylvania, Rhode Island and Delaware.

Western states — California, Washington and Oregon — also announced Monday that they would collaborate on a "shared approach for reopening our economies."

But Trump has also sought to assert his authority on the matter, creating a task force to lay out a plan for the national reopening. Trump also tweeted Monday that “it is the decision of the President” to send people back to schools and businesses.

“With that being said, the Administration and I are working closely with the Governors, and this will continue. A decision by me, in conjunction with the Governors and input from others, will be made shortly!” Trump tweeted.

The bill — led by Raskin and fellow Reps. Hakeem Jeffries, Donna Shalala, Anna Eshoo and Peter Welch — is the latest way that Democrats in Congress have looked to wrest at least some control from the White House, which has largely led the federal public response to the crisis.

House and Senate lawmakers, meanwhile, remain in self-isolated back in their districts, without a method to vote or hold hearings.

The legislation would also create a federal Health Equipment Production Board, in an attempt to resolve complaints that the White House’s hands-off approach has led to a bidding war among states for much-needed medical gear.

“if you pick up the newspaper, everybody’s saying the same thing, which is that America is hungry for a national plan to get us through the crisis and to reopen commerce and social life,” Raskin said. “And we don’t have a national plan.”

Facebook
Twitter
Pinterest
WhatsApp
Linkedin
ReddIt
Email
Tumblr
VK
Previous articleWendy Williams Breaks Down In Tears During Show Over Lives Lost On Easter: ‘It’s Unbearable’
Next articleCoronavirus symptoms: Pain in this private area may be a warning of a COVID-19 infection