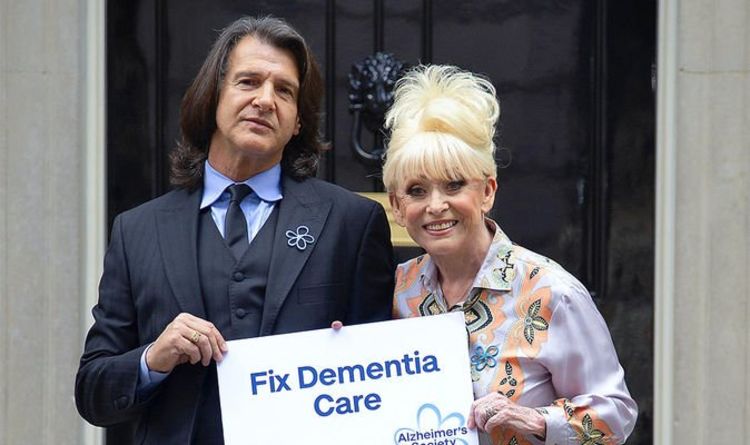 The EastEnders star, 82, was diagnosed with Alzheimer’s in 2014 and is being cared for by Scott, 56.

Speaking at the launch of the 40th London marathon, Scott said how fortunate he and Barbara are to be able to afford some help but others are not so lucky.

“Most people have to keep up with their jobs to look after relatives with dementia,” says Scott, who is running his second marathon to raise money to fund research into the condition.

“If you are ill with most conditions then the NHS has something in place but with dementia there is nothing. I always say that I’m very fortunate – well, actually there is no such thing as fortunate – but I do get some help in. But there are people who don’t have the resources.

“Unfortunately social care in our country is broken, especially with dementia.

“When I got involved with the Alzheimer’s Society they said I was going to have to look after myself. They said that they knew Barbara was my main priority but if the carer goes down, then there is no one to support the person who needs caring. So it’s imperative to have your own time. But there are some people who are so restricted to their life that they can’t meet anyone by themselves.”

Last year Scott ran the marathon for The Dementia Revolution, and helped to raise a record-breaking £4million.

Although he vowed never to do another, he is now training to run his second on April 26, this time raising funds for theAlzheimer’s Society.

Later this month, Ross Kemp, who played Barbara’s son Grant in EastEnders, will begin making a film about Alzheimer’s.

He said: “Barbara won’t be in it but I will be making a documentary because it is a grave problem and a massive issue. Sadly, it is not going to get better in the foreseeable future.”

● To donate to the Alzheimer’s Society on Scott’s fund-raising page, go to justgiving.com/fundraising/Scott-Mitchell33