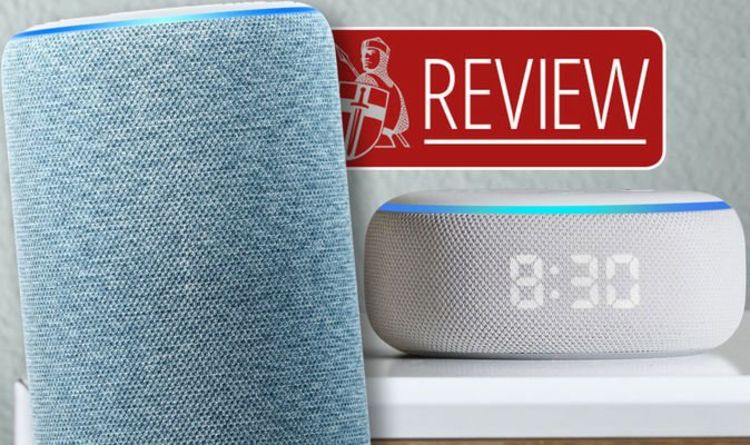 Amazon is already leading the way when it comes to smart speakers.

Its Echo devices have become a global smash hit with them offering a huge array of intelligent features at a very affordable price.

The online retailer already has a huge range of smart devices and now there’s two new updates that are definitely worth your attention.

The latest Echo 2019 and new Echo Dot with clock are both on sale now and here’s our thoughts on whether these all-new music makers are worth your money.

The Echo Dot is already one of the most of the popular smart speakers in the world and it’s hardly surprising why.

This mini machine offers all the usual smart features in a package that’s affordable for everyone – the standard mini can be picked up for £34.99 in Amazon’s current sale.

Now there’s a new version of the Dot and it gets a feature never seen before on an Echo device.

Hidden under the fabric design is a small LED screen which now glows to tell you the time.

It’s a very simple idea but it works really well and adds a little extra bonus to this already brilliant device.

Amazon has also been clever as the glowing time changes brightness depending on the light in the room.

That means in the day it shines bright but when the lights are switched off at night it dims so it won’t keep you awake.

If you decided to ask the Alexa personal assistant to wake you up in the morning you can now tap the top when the alarm goes off to give you some extra snooze time.

There’s plenty to like about this new Dot but it’s worth noting that its audio is only really good enough for a small room and this is not a device that will power you through your next party.

It is, however, the perfect little speaker for an office or bedroom and the addition of the clock is stroke of genius from Amazon.

The standard Echo hasn’t had a refresh in almost two years but that’s now changed with the new device announced last month.

The Echo 2019 is now in stores with it getting a new look and much-improved audio.

In fact, this device gets the same audio quality as the more expensive Echo Plus with a 3-inch woofer and increased back volume.

This means you get a much fuller sound and richer bass when booming out your favourite tracks.

Although Amazon has added this extra tech, it hasn’t raised the price which means you get a better speaker without paying any more.

And at under £90, the Echo remains incredibly good value for money.

Once again, we can highly recommend the Echo especially as the Alexa assistant continues to improve.

Simple voice controls will have your Echo answering questions, turning on lights and playing all of your favourite music.

News, weather and traffic reports can also be received in a flash and there’s plenty of other useful features such as setting timers and making shopping lists.

Like the new Dot with the clock, the Echo is hard not to recommend but we do have some very small niggles.

A complete design change would have been nice as we don’t really think Amazon has moved these devices forward when it comes to the way they look.

An internal battery would also be welcomed at some point as it would be great if the Echo became a little more portable.

Finally, this is not a speaker if your main concern is audio quality.

The new Echo is far better than its predecessor and will certainly boom out a tune but there are much better smart speakers out there when comes to volume and power.

In fact, Amazon is about to release its own Echo Studio in the coming weeks which finally brings the performance many have been waiting for.