‘Amount of time is shocking’ Why Yellowstone volcano could erupt...

The Yellowstone caldera gets its nickname as a supervolcano due to its capability to inflict global devastation should another supereruption occur in future. This has already happened three times in history – 2.1 million years ago, 1.3 million years ago and 640,000 years ago, leading to fears that it is “overdue” another mammoth eruption due to the average time between previous activity. The United States Geological Survey (USGS) says these claims are unsubstantial but still constantly watch the seismographs around Yellowstone National Park for signs of anything out of the ordinary.

But, in 2017, scientists from Arizona State University published a study suggesting that the dormant giant could develop the conditions needed to erupt much quicker than previously thought.

After analysing minerals in fossilised ash from the most recent supereruption, researchers hypothesised that the volcano last woke up after two influxes of fresh magma flowed into the reservoir below the caldera.

The minerals revealed that the critical changes in temperature and composition built up in a matter of decades, not centuries like previously thought by geologists.

Christy Till, a geologist at Arizona State University, said: “We expected that there might be processes happening over thousands of years preceding the eruption.”

But graduate student Hannah Shamloo added: “It’s shocking how little time is required to take a volcanic system from being quiet and sitting there to the edge of an eruption.”

Kari Cooper, a geochemist at the University of California, Davis who was not involved in the research, said Ms Shamloo and Dr Till’s research offered more insights into the time frames of supereruptions.

But Scientist-in-charge of the Yellowstone Volcano Observatory, Michael Poland, said there is no reason to fear.

He told National Geographic: “We see interesting things all the time. 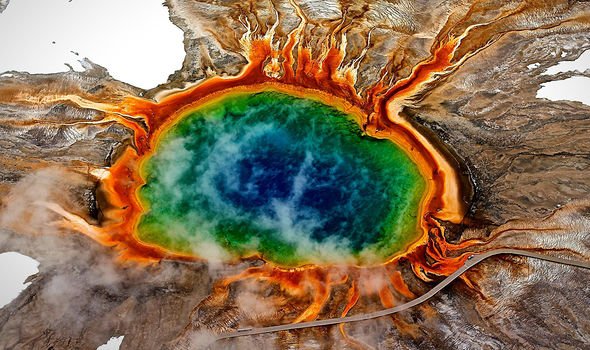 Some claim Yellowstone is overdue an eruption (Image: GETTY)

“But we haven’t seen anything that would lead us to believe that the sort of magmatic event described by the researchers is happening.”

Dr Poland added that the research overall is “somewhat preliminary, but quite tantalising.”

In addition, recent research from the University of Leicester, published this month in the journal Geology, suggests that Yellowstone may be losing its strength.

Scientists announced the discovery of two newly identified supereruptions associated with the Yellowstone hotspot track, including what they believe was the volcanic province’s largest and most cataclysmic event.

The results indicate the hotspot, which today fuels the famous geysers, mud pots, and fumaroles in Yellowstone National Park, may be waning in intensity. 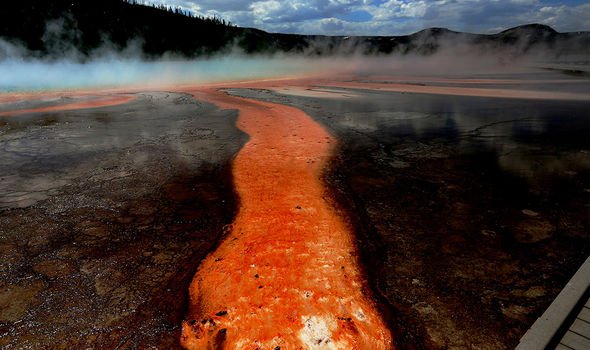 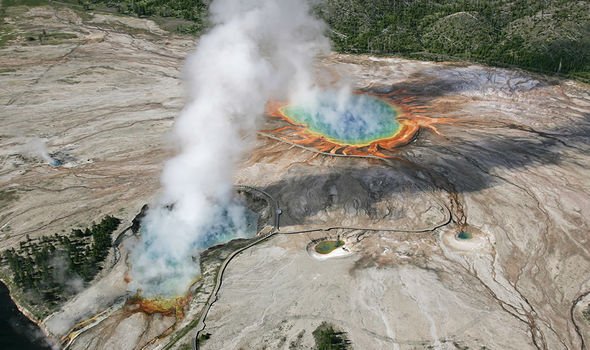 Scientists say Yellowstone may be calming down (Image: GETTY)

Dr Thomas Knott, the lead author said:  “We discovered that deposits previously believed to belong to multiple, smaller eruptions were, in fact, colossal sheets of volcanic material from two previously unknown supereruptions at about nine and 8.7 million years ago.

“The younger of the two, the Grey’s Landing supereruption, is now the largest recorded event of the entire Snake-River–Yellowstone volcanic province, it is one of the top five eruptions of all time.”

Both of the newly discovered supereruptions occurred during the Miocene, the interval of geologic time spanning 23–5.3 million years ago meaning the recurrence rate of Yellowstone hotspot supereruptions was, on average, once every 500,000 years.

By comparison, two supereruptions have taken place in what is now Yellowstone National Park during the past three million years.

Dr Knott added: “It, therefore, seems that the Yellowstone hotspot has experienced a three-fold decrease in its capacity to produce super-eruption events.

“This is a very significant decline.”