Amy Coney Barrett papers over rift between Trump and GOP 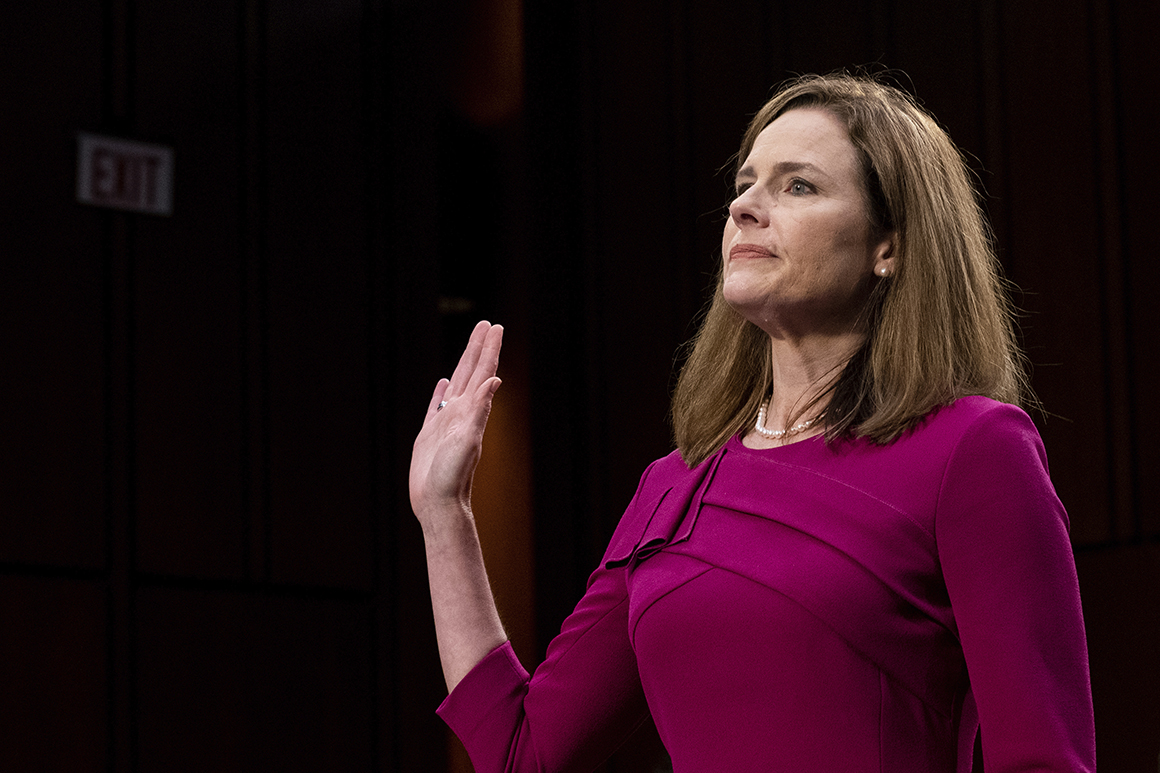 Fear of Trump remains high in GOP circles, and Republicans know that their fate is inexorably tied to the president’s own results. Yet at the moment, it’s not clear Trump has the juice within his party to cut a big spending deal with Democrats.

Meanwhile, there is near unanimous support for Barrett, the type of Supreme Court nominee that Senate Republicans would have confirmed for a President Rubio or a President Cruz. So some in the GOP say they should take the win in front of them and wait until after the election to pass a coronavirus relief package that would split the party — even if it could boost both Trump’s flailing re-election campaign and the GOP battle to keep the Senate.

“The reason [Barrett’s nomination is ] so exciting to Republicans is the uncertainty about what’s going to happen on Nov. 3. Here there is certainty that… we can get this across the finish line,” said Sen. Mike Braun (R-Ind.), who introduced Barrett at her confirmation hearing on Monday. “There’s so much uncertainty politically, not only associated with the election, and also what can we agree on” for stimulus.

Braun said that the Barrett confirmation would be a cornerstone of Trump’s legacy in his first term. Some of his colleagues are increasingly worried there won’t be a second term, and that Trump’s trajectory threatens their majority as well.

“It’s a trend and it’s going in the wrong direction,” said one Republican senator of Trump’s polling. “I think Republicans have a better chance of keeping the Senate than Donald Trump has of winning the election.”

Sen. Marsha Blackburn (R-Tenn.) slammed Treasury Secretary Steven Mnuchin and White House chief of staff Mark Meadows during a Saturday conference call to discuss the $ 1.8 trillion stimulus proposal they floated to Pelosi, saying it would be “the death knell for our majority if Pelosi gets this win,” according to sources on the call.

When asked Monday about her concerns with the White House’s position in the Covid relief talks, Blackburn said she instead backed a $ 300 billion bill crafted by Senate Majority Leader Mitch McConnell (R-Ky.). Democrats blocked debate on that measure a month ago, rejecting it as way too little to help the slumping U.S. economy.

“I like the package that we had on the floor,” Blackburn told reporters following the first day of Barrett’s confirmation hearings. “It was the right approach.”

Blackburn, however, denied there was any serious divide with Trump or the White House.

“There is a lot that we agree on and we’re going to do just fine this week,” the Tennessee Republican said following the first day of hearings on Barrett’s nomination. Blackburn serves on the Judiciary Committee.

With calls for more help coming from Trump, business leaders and average Americans, Senate Republicans are discussing possibly holding a vote on another GOP aid bill next week, a reflection that the party needs to show it’s still trying to address the biggest crisis in the country, according to people familiar with internal party discussions. Democrats have rejected any piecemeal legislation, and Republicans have tried to shift the blame onto them for the long delay in a new coronavirus assistance package, though Pelosi first passed another bill in May.

“Once you take a look at the things Nancy Pelosi is promoting, both in terms of the price and the policy, we have a lot of concerns about that,” Senate Republican Conference Chairman John Barrasso (Wyo.) said in an interview on Monday. “But we’ve put forth what we thought was a good faith effort, and [Senate Minority Leader Chuck] Schumer and the Democrats voted no, every one of them… We’re united on that.”

Of course, after Republicans spent the day attacking Democrats for obstructing a smaller bill, Trump turned his attention to his own party on Twitter: “Republicans should be strongly focused on completing a wonderful stimulus package for the American People!”

Yet Trump has only limited influence in the legislative sphere and his sinking political fortunes are further undercutting his agenda. The president seems to pay little heed to what’s happening on Capitol Hill on a daily basis, but then will claim that a major health care or tax cut package is going to be heading to his desk soon, despite the fact that nothing of the kind is even being considered by Congress.

Trump’s current political standing seems to have hurt his ability to convince Senate Republicans to embrace more deficit spending. Some on Saturday’s conference call between Senate Republicans, Mnuchin and Meadows saw the frosty reception for the senior administration officials as a reflection of a party becoming less and less deferential to the president.

White House press secretary Kayleigh McEnany insisted that “Senate Republicans will ultimately come along with what the president wants.” But if it’s anything close to the $ 1.8 trillion discussed by the Trump administration and Democrats, Braun surmised: “I can’t vote for it.”

“The only ones who will come up looking good at it are the Democrats,” said Braun, who criticized proposals to send undocumented immigrants stimulus checks and expand some Obamacare coverage.

Even the handling of Barrett’s nomination became a point of contention between Senate Republicans and Trump on Monday. Within minutes of the hearing’s start, Trump essentially demanded that his party fast-forward through the planned four days of hearings and confirm her, and then immediately pass a relief bill.

“The Republicans are giving the Democrats a great deal of time, which is not mandated, to make their self serving statements relative to our great new future Supreme Court Justice. Personally, I would pull back, approve, and go for STIMULUS for the people!!!” Trump tweeted.

The Judiciary panel’s chairman Lindsey Graham, whose South Carolina Senate seat is now vulnerable due to his alliance with Trump, quickly brushed off Trump’s comments.

“With all due respect to the president, the committee is following the traditions of the committee,” Graham (R-S.C.) said. “It’s good for the country to have this hearing.”