Anchored to her job 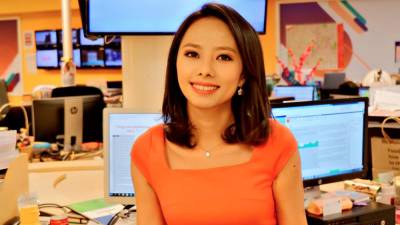 THERE was a time when most urbanites would prefer getting their news from international broadcasters rather than local channels.

Thanks to the recent movement control order (MCO), we have relied heavily on local newspapers, news websites, TV and radio channels to keep us abreast of the latest developments, especially those pertaining to the Covid-19 situation.

Among the news anchors keeping us updated on what is going on in the country and the rest of the world is Astro Awani’s Cynthia Ng.

“To be honest, I kind of fell into broadcasting … I was a science stream student in high school but after Form Five I decided I did not want to do science.

“A private university in Cheras offered me a scholarship and I took it. I really enjoyed it, and right before I graduated, Astro was starting its own news channel in 2007.

“At that time my dean was a former TV3 producer. She had friends who asked if she knew anyone who could speak in Bahasa Malaysia and English, and that was how I got my first job in Astro Awani.”

Ng’s career path is rather unconventional. After a year on the job at Awani, she left to join an education web portal, then returned to Awani’s Current Affairs section, then left the station a second time to join Bloomberg TV when the international news outlet set up shop here, and then returned to Awani.

“Bloomberg gave me the opportunity to really immerse myself in the world of business and financial reporting. I really liked it.

“I got to interview different personalities [and] corporate leaders. I really enjoyed learning how they do what they do, and bringing their stories to more people.”

During her third stint at Awani, she started a show called Awani Review in which she focused on start-ups, entrepreneurs and industry captains, exploring topics including business strategy and leadership management.

Although Awani has been around since 2007, most people have only started to take note of the channel about five or six years ago.

“This was partly due to breaking news stories, and the ones I can recall off the top of my head are the MH370 and MH17 incidents, the elections and all the political issues we have been seeing. I think that put us on the map.

“If something big was happening, you can be sure that Astro Awani would be there and be among the first to bring live coverage and round-the-clock analysis.

“I think that a lot of people want more credible news. Social media gives us a lot of news, but there is also a lot of misinformation out there.”

She has had her fair share of interviews that went “off the rails” (including one interview in which the person she was interviewing could only speak one language and there was no one who could translate), she said it is the preparation for the interviews that is the hardest part of the job.

These days, Ng’s main work is now in the studio, anchoring. She doesn’t go out into the field as much as she used to.

“My work is to prepare the news, check the news, and anchor the news. This takes up most of my time. I have to put up bulletins almost at the top of every hour.

“Clearly I don’t do that on my own, we have a good team and we rotate between anchors. I edit my own show, and do post-production stuff. I plan for interviews, do more research and planning.

“[But when] breaking news happens, all the planning goes out the window.”

Asked what were her most memorable interviews, she cited ones that she did with the current Yang di-Pertuan Agong Al-Sultan Abdullah Ri’ayatuddin Al-Mustafa Billah Shah, down-to-earth Chinese billionaire Jack Ma, and a person she met while doing a report on HIV.

“I followed an NGO and they were doing an outreach programme at a drug den. There were a dozen drug accidents in this abandoned kampung home in Kuantan.

“I was interviewing this guy who was telling me his life story, and while talking to me he was looking for an undamaged vein in his body so that he could inject the drugs.”

The addict was a young man who was lucid at the time of the interview. “He told me about the cycle of addiction and poverty, and how the system failed him.

“That assignment was memorable because it served as a reminder that while I was interviewing people like Jack Ma or the Agong, a lot needs to be done to highlight another part of Malaysia. People who live on the fringes of society.”

"Just the message," he said. "And the fact that I knew her personally." Jackson had previously confessed that he once took the song "Dirty Diana"...
Read more