‘Another nail in an almost closed coffin’: Trump faces his next coronavirus test 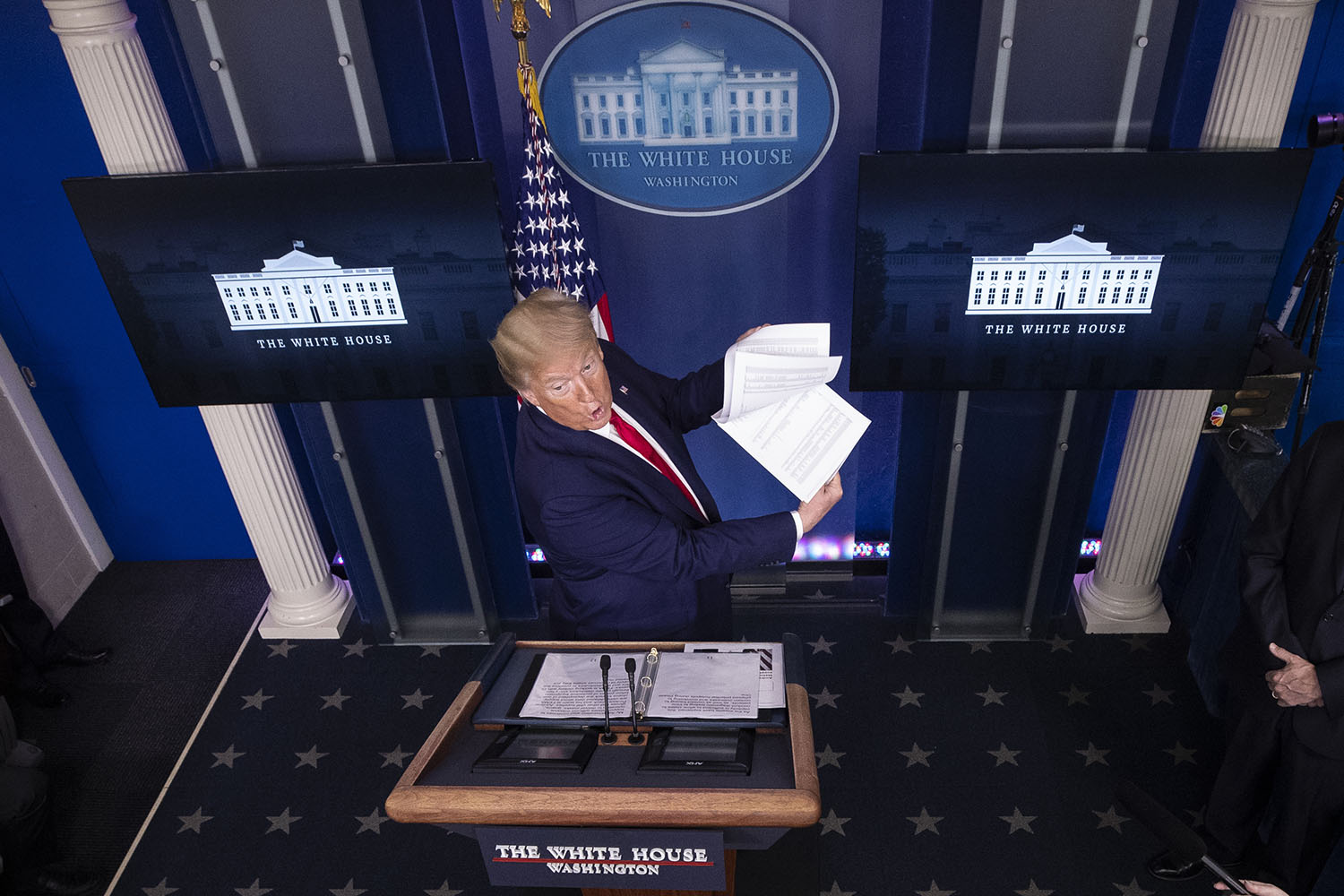 President Donald Trump’s political fate now hinges on a simple premise: Everybody who needs a coronavirus test must be able to get a test.

More than five weeks into a devastating shutdown of the U.S. economy, Trump’s aides and advisers inside and outside his administration now view disapproval of his preparedness for the coronavirus pandemic as his biggest political liability heading into the 2020 election.

The president and his team in the White House are rushing to counter perceptions and develop a coherent message about the nation’s ability to test Americans for the coronavirus quickly and broadly, a prerequisite governors and business leaders have outlined to successfully get the economy back on track.

The message coming out of the White House on testing varies day to day. Trump has contradicted himself repeatedly over the past month about the federal government’s role in fighting the crisis and his own control over states. And more than three months after China reported its first death from the virus, the administration has been plagued by complaints about testing shortages and delays along with comparisons to other advanced nations such as Germany and South Korea that ramped up testing quickly to control the virus.

“If the testing does not get sorted out as soon as possible, it will be another nail in an almost closed coffin,” said one Republican close to the White House who argued messaging alone cannot solve the political challenge it presents for Trump.

Trump has tried to circumvent his perception problem by pinning the responsibility for ramping up testing on the nation’s governors, who have complained for weeks about not being able to procure enough swabs, chemicals or supplies to run the actual tests. His latest tension came with Maryland Gov. Larry Hogan, who Trump criticized even though the governor followed Trump’s instruction for states to get their own tests.

“We are moving very rapidly,” Trump said about the testing at Monday’s White House briefing. “And we’ll be doubling our number of daily tests if the governors bring their states fully online to the capability that they have. We have tremendous capability out there already existing.”

“We have testing coming in two weeks that will blow the industry away,” he said later in the Monday briefing.

Two-thirds of registered voters in a recent NBC/Wall Street Journal poll said Trump did not take the threat of the virus seriously enough at the beginning and almost half said he’s still not handling it well.

The administration’s response to the coronavirus now overshadows all of the Trump campaign’s carefully planned efforts to highlight Trump’s record on the economy, judicial appointments or deregulation.

Trump allies have tried to combat a narrative that the president was behind the curve by emphasizing Trump’s early steps to fight the virus. Administration officials have been amplifying defenses of Trump at every turn they can, most recently promoting a five-minute video by GOP Rep. Dan Crenshaw that the president also promoted on his Twitter feed on Sunday.

“The biggest political narrative that threatens them now is that they were slow to respond to the virus — and testing is a key component of the ‘slow start’ narrative, especially with the early testing fiascos,” said a second Republican close to the White House, who argued the administration needs to spend the next four to eight weeks getting the coronavirus under control and reopening the economy without incident before voters make up their mind about Trump’s leadership.

As the nation opens up, testing will be a crucial tool in spotting small outbreaks before they become big ones that could shut down portions of the country all over again.

Just over 4 million tests have been completed so far, for a population of roughly 330 million Americans, amid widespread reports of sick Americans being unable to get tested quickly — increasing the odds of spreading the virus. Estimates vary widely even among reputable public health experts about how many tests need to be done to keep the virus at bay. The White House‘s numbers are on the low end of that spectrum.

But administration officials are expressing confidence in public and private that the U.S. has enough tests for the short term and will have enough for the summer, since not every American needs to be tested.

The challenge could come in the fall, said a senior administration official and a third Republican close to the White House, when flu season returns and patients flood doctors’ offices with symptoms that could be Covid-19 or the flu. Doctors and labs will need tests then to make a distinction.

But many administration officials now privately acknowledge that pledges from Trump and his team since early March have not panned out, even as Trump continues to hype the administration’s early work.

During a visit to the Centers for Disease Control and Prevention in Atlanta on March 6, the president told reporters “anybody that wants a test can get a test. That’s what the bottom line is.” His comment was contradicted for the past six weeks by state officials, health care workers and countless individual stories of Americans unable to get tested.

By March 12, senior adviser Jared Kushner had started to get involved in the coronavirus efforts — at the urging of the vice president’s chief of staff, Marc Short — because internally the development of tests was viewed as a mess. Kushner stood up a separate operation at the Federal Emergency Management Agency apart from the coronavirus task force, sending White House and health aides to work out of the FEMA headquarters.

Trump has made other announcements — such as widespread testing by companies in parking lots — that he then mocked as outside the federal government’s responsibility.

Trump and other top aides have said the testing and resources for them are up to the governors.

Even the question of who within the White House is the point person on testing remains unclear internally to staffers. A top Health and Human Services official, Adm. Brett Giroir, is officially the testing czar. Kushner has been involved since mid-March to add urgency to the effort. Birx is also working on ramping up testing capacity out of Walter Reed National Military Center.

Coronavirus task force officials acknowledge early missteps on testing, even as Trump’s closest aides try to portray it as a problem they’ve solved.

“And it was an issue of embracing — the way we have now, and should have — the private sector, who clearly has the capability of making and providing tests at the level that we will need them for,” Fauci added.

The lag in testing comes in part from the president and the administration’s early efforts to downplay the threat of the virus, along with changes in leadership on the coronavirus task force and early missteps by the CDC to develop a test.

Roughly 15 weeks after the coronavirus appeared in China and on the radar of White House staff, states say they still lack the capacity to test every resident with symptoms — let alone the people potentially harboring the virus without exhibiting signs of illness.

The president and his team said Monday the nation has enough tests to start reopening the economy in phases, with not all states restarting businesses or life at once.

While the states with high infection rates initially happened to be Democratic strongholds on America’s coasts, the virus is quickly spreading to the Midwest, rural areas and swing states like Michigan that are home to Trump’s political base.

Business leaders, governors and senators have also been clamoring for greater access to tests before they reopen offices or urge Americans to move about more freely. Corporate executives and lawmakers made that point repeatedly on calls with the president, vice president and top White House aides last week.

At the White House briefing on Sunday night, Trump said he was deploying the Defense Production Act to produce 20 million additional swabs for tests. The move came after more than a month of criticism from lawmakers that Trump was not using his authority forcefully enough to fight the crisis.

“It is just totally astounding to me that the president has not fully used the Defense Production Authority that he has to get the manufacturing of all the PPE and the testing equipment we need. It’s just astounding to me. But not surprising,” said Democratic Sen. Mazie Hirono of Hawaii.