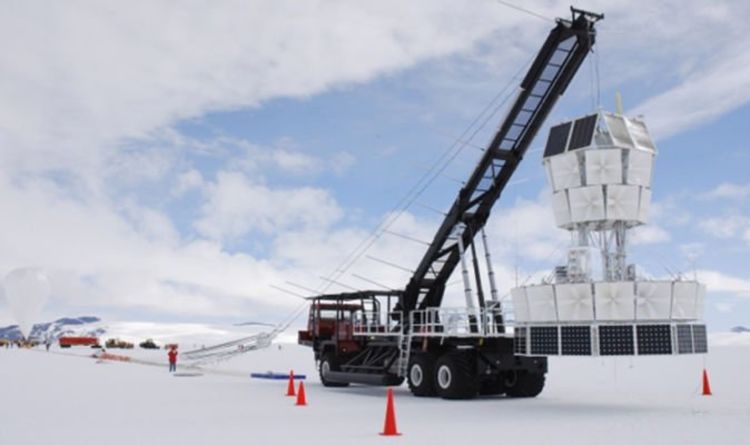 Antarctica is Earth’s southernmost continent where the geographic South Pole is located. The frozen desert is home to some 1,000 scientists who live in the blistering conditions that reach -90C at times, as they attempt to understand more about the history of Earth and climate change. Last year, a team of researchers from the University of Hawaii were left puzzled after mysterious particles were captured flying out of the ice.

The team uploaded a video to YouTube where they detailed the bizarre findings captured thanks to a NASA balloon-borne satellite drifting over the southern continent.

The narrator explained: “In an event that challenged conventional physics, a radio burst from an upside-down cosmic ray shower has been detected for the second time by the Antarctic Impulsive Transient Antenna (ANITA).

“The University of Hawaii’s Peter Gorham is part of the team that made this puzzling discovery.

“His findings were recently published in Physical Review Letters.

“This event captured the imagination of physicists and physics buffs around the world.

“While there is a need to collect more data, the challenge to conventional wisdom is tantalising.

Dr Gorham explained why it questioned everything physicists thought they knew.

“What we saw is something that looked just like a cosmic ray as seen in the reflection of the ice sheet, but it wasn’t reflected.

“It was as if the cosmic ray had come out of the ice itself, a very strange thing.

JUST IN: Why Neil deGrasse Tyson claimed mission to Mars ‘not going to happen’

“But when you do a new experiment, something completely different like ANITA, very often you can turn on some brand-new streetlights out there in the dark wilderness.

“It gives us a chance to look for new types of models and theories and evidence in places that we never got to look before.”

It’s not the first time NASA has been involved in a sub-zero surprise in the region, though.

in 2010, the space agency drilled into the ice and pushed a camera into a hole more than 600 feet below the West Antarctica Ice Sheet and spotted a small shrimp-like creature dancing around.

Bob Bindschadler of NASA’s Goddard Space Flight Centre remembered the moment well, revealing:  “We were like little kids huddling around, just oohing and aahing at this little creature swimming around and giving us a little show.

“It was the thrill of discovery that made us giddy, just totally unexpected.

“We thought we were just going into a deep, dark cold water hole and never anticipated we’d see any life.

“The colour was what caught our eyes.”

The complex critter was identified as a Lyssianasid amphipod, about three inches in length.