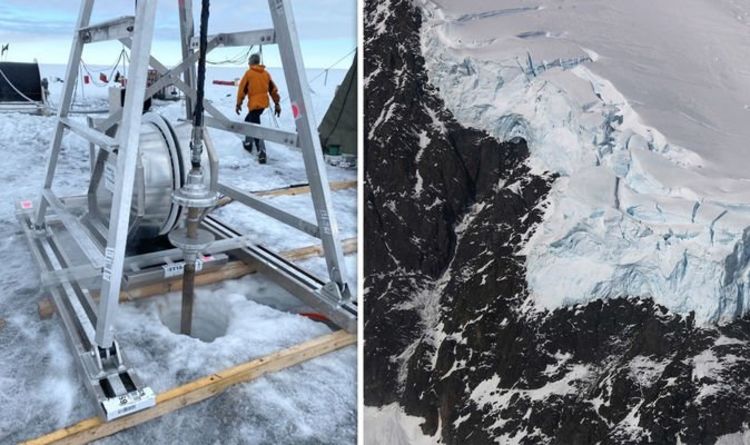 The find was made possible thanks to an underwater robot called Icefin, which headed more than 700 metres below the ice of the Thwaites Glacier. Also dubbed the “doomsday glacier,” this chunk of ice gets its nickname because it is one of the frozen desert’s fastest melting areas. Now, scientists from New York University have even more cause for concern, after the robot recorded water temperatures at 2C above freezing.

A statement from their study concluded: “This is an alarming discovery that points to the cause behind the gradual melting of this ice shelf while also raising concerns about sea-level rise around the globe.

“It would drain a mass of water that is roughly the size of the UK or the state of Florida and currently accounts for approximately four percent of global sea-level rise.

The new measurement was made at the glacier’s grounding zone, where the ice transitions between resting fully on bedrock and floating on the ocean as an ice shelf.

David Holland, a lead researcher on the expedition said: “The fact that such warm water was just recorded by our team along a section of Thwaites grounding zone where we have known the glacier is melting suggests that it may be undergoing an unstoppable retreat that has huge implications for global sea-level rise.

“Warm waters in this part of the world, as remote as they may seem, should serve as a warning to all of us about the potential dire changes to the planet brought about by climate change.”

The team, dubbed MELT, or Melting at Thwaites grounding zone and its control on sea level, spent the last two months in -30C weather at the glacier for the project.

Britney Schmidt, lead scientist for Icefin added: “We’re proud of Icefin, since it represents a new way of looking at glaciers and ice shelves.

“For really the first time, we can drive miles under the ice to measure and map processes we can’t otherwise reach.

“We’ve taken the first close-up look at a grounding zone. It’s our ‘walking on the Moon’ moment.”

In addition to deploying Icefin, the researchers sent out ocean instruments and took sediment cores.

The team later sent a second Icefin vehicle to another location — the Ross Ice Shelf — to compare results.

Keith Nicholls, an oceanographer with the British Antarctic Survey, added: “We know that warmer ocean waters are eroding many of West Antarctica’s glaciers, but we’re particularly concerned about Thwaites.

“This new data will provide a new perspective of the processes taking place, so we can predict future change with more certainty.”

ByMichelle Starr A little dead star that dazzled us earlier this year is not done with its shenanigans. Magnetar SGR 1935+2154, which in April emitted the...
Read more