Antarctica shock: How ‘largest animal ever recorded’ was hauled from... 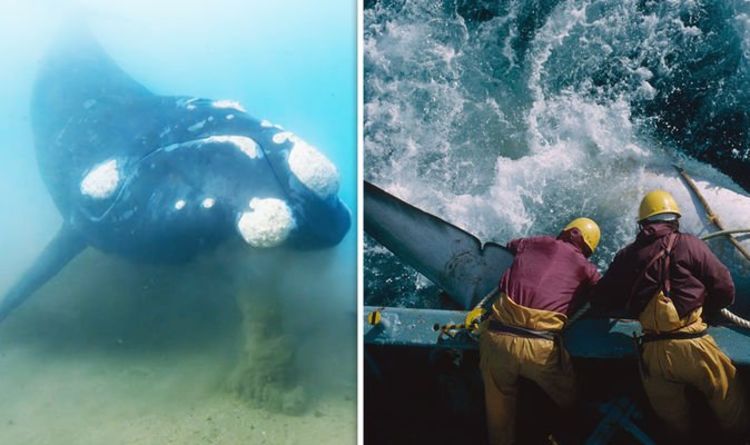 Antarctica is Earth’s southernmost continent where the geographic South Pole is located. The frozen desert is home to some 1,000 scientists who live in the blistering conditions that reach -90C at times, as they attempt to understand more about the history of Earth and climate change. Last Sunday night, Sir David Attenborough – the legendary BBC presenter – took viewers halfway across the world for the first episode of his new series.

Following a mesmerising plunge below the ice to reveal a seabed teeming with life, the series took a dark twist after the 93-year-old exposed the shocking implications of human intrusion.

He said: “Life here under the ice has remained unchanged for millennia, but in the last 200 years, much of Antarctica’s wildlife has had to face new predators – human beings.

“We devised new hunting techniques and used them so mercilessly that we almost exterminated great whales.

“These whaling stations on South Georgia were at the centre of this industry.

“More than one-and-a-half million whales were slaughtered in Antarctic waters, the blubber was stripped from their massive bodies and boiled down in vats to make margarine and soap.

“And the largest animal ever recorded, a 33-metre blue whale, perhaps over 100 years old, was butchered on this ramp in just two hours.”

Sir David detailed the shocking extent of the barbaric treatment and its knock-on effect on the Antarctic ecosystem.

He added: “This reckless slaughter marked a new low in our relationship with the natural world.

“Southern right whale were hit the hardest, they were so trusting and inquisitive that they swam right up to the whalers’ boats.

“Mothers with calves were targeted first, as to give birth, females came to the same sheltered bays and would not leave their calves alone at the surface.

“In just decades, a population of 35,000 was so reduced that only 35 of the females survived.”

There was hope though, the legendary BBC presenter revealed.

He explained how an attempt has been made to slowly redeem the shocking historic behaviour.

Sir David concluded: “But times have changed, a ban on the commercial hunting of whales, introduced in 1986, has stopped all of Japan, Norway and Iceland.

“Our relationship to these remarkable creatures has undergone a huge shift.

“Scientists are now learning a great deal about these whales, but we still don’t know how long they live.

“It’s thought that some individuals alive today were around at the time of the mass slaughter, yet these 60-tonne whales remain gentle and inquisitive around humans.

“By putting a stop to commercial hunting, this population has now grown to over 2,000.”

The first episode of Seven Worlds, One Planet was aired on BBC One on Sunday, October 26, at 6.15pm.

Viewers can now catch up with each instalment in Ultra-High-Definition (UHD) on BBC iPlayer.