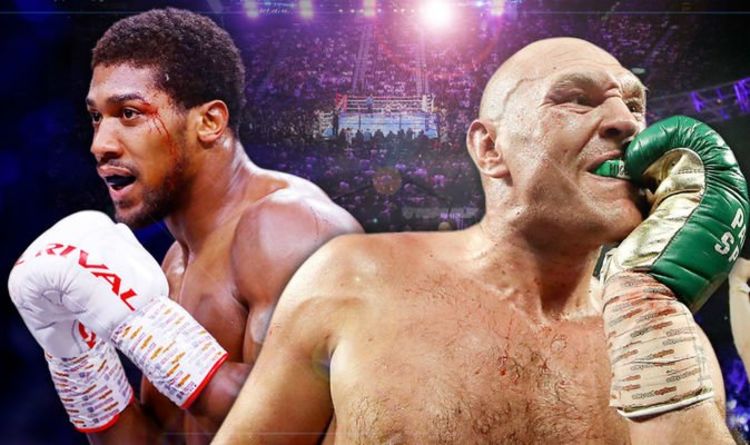 Anthony Joshua has laid down the gauntlet to Tyson Fury, insisting the newly-crowned WBC heavyweight champion must fight him to truly claim he’s the best heavyweight in the world. The long-awaited Battle of Britain moved a giant step closer to coming to fruition in February when Fury emphatically ended Deontay Wilder’s five-year reign atop of the WBC’s heavyweight rankings.

All that remained for the most lucrative fight in the history of British boxing to taking place later this year was for the Joshua and Fury to win their respective bouts against Kubrat Pulev and Wilder.

The coronavirus outbreak, however, has led to both fights being postponed – with Joshua now set to lock horns with Pulev on July 25 and Fury on course to renew his rivalry with Wilder in October.

Throughout the build-up to his rematch with Wilder and the weeks that have followed his title-clinching victory, Fury has repeatedly called himself the best heavyweight on the planet.

Joshua, the owner of the unified heavyweight titles, disagrees with that notion, although he has the utmost respect for his WBC counterpart.

Despite being tentatively scheduled to face Pulev at the Tottenham Hotspur Stadium in the summer, Joshua admits a bout with Fury makes the most sense at this moment in time.

He said: “I’m the unified heavyweight champion of the world, he’s the WBC champion. What it will prove, me and him fighting?

“There will be one dominant figure in the heavyweight division that will have all of the belts and become undisputed.

“Logically to prove yourself as No 1, I have to fight Tyson Fury. He has to fight Anthony Joshua.”

Earlier this month, it was reported that Team Fury are eager to get out of their obligation to face Wilder again in order to pursue a unification fight against ‘AJ’.

Wilder, however, has no intention of foregoing his opportunity to avenge his first professional loss and reclaim the WBC throne.

“No-one should be surprised,” Wilder told PBC Boxing’s podcast when asked why he exercised his trilogy fight clause. “I am who I am, Deontay ‘The Bronze Bomber’ Wilder. Why wouldn’t I want it?