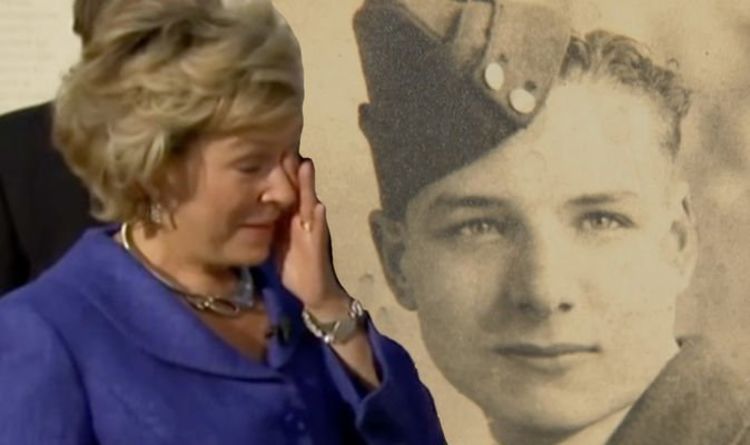 An Antiques Roadshow guest brought expert Hilary Kay to tears when she read out an excerpt from her grandfather Teddy’s final letter to her grandmother. The guest revealed he was an RAF gunner and had been tragically killed while in the service. Hilary felt it was right Teddy’s granddaughter read out his words and both the BBC expert and the guest were in tears by the time she had finished.

The guest brought an array of items to Hilary’s attention, including a photo of Teddy and several letters.

On the photo, the guest said: “He’s my grandad and his name was Edward or Teddy and he is 19 roughly in that photo.

“He had quite a safe job, I know he was doing some engineering on aircraft and doing things based in England.”

“So in the 1940s, we are in the middle of the Second World War, he was ground crew?” Hilary asked.

“That’s correct and he then put himself forward because he realised they were losing lots of aircrew and that they needed more men,” she replied.

“He volunteered as an air gunner and then he did this in secret without my nan knowing.”

Hilary remarked: “When we talk about going into the bombers as a gunner, I mean that was the most dangerous job whether you were a rear gunner or wherever it was you were very easily picked off by whoever was defending the target.”

“It was my nan’s nightmare, to be honest. They’d discussed it and she said that was the one thing she was afraid of him doing,” the guest revealed.

Pointing to a photo of Maisie and Teddy, Hilary asked: “So this is a photograph of your grandfather Teddy and your nan on their wedding?”

“Now this letter has obviously been treasured and loved and starts, ‘Dearest, It’s now about 7pm,’ and I’d like you to take the story up, I don’t know if I can read it.”

Reading it out, the guest said: “When you read this letter one of two things will have probably happened.

“Either I should be home off operations or I shall be missing that is why I want to write this letter dearest.

“Now this is where I have to confess to deceiving you darling, I’ve never done it before, I hope I never have to do it again, I hope you understand that I had to I couldn’t help it.”