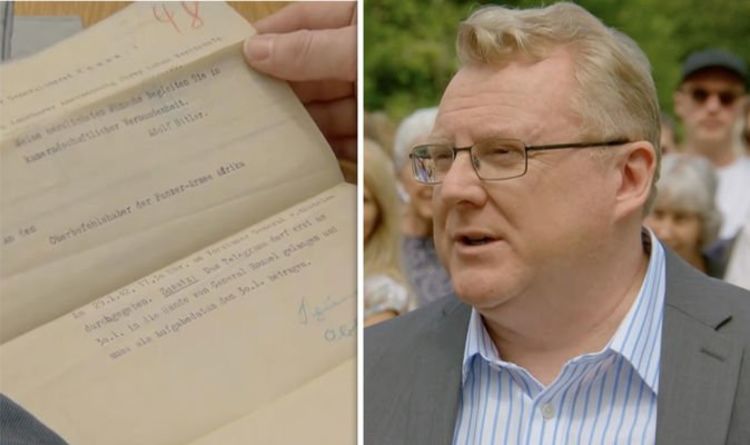 In an archived episode of Antiques Roadshow from 2019, Mark Smith was left baffled when he found himself holding a telegram from Adolf Hitler to Erwin Rommel during World War Two, the only copy of the letter in the world. Mark spoke to the grandson of the man who was allowed into Hitler’s bunker to find objects of material interest.

Mark started the valuation saying: “Everything on this table is foreign we have a French medal and a German map case, however the medal is a French medal awarded to British soldiers who fought in normandy for the liberation of france the D Day landings.

“Your Grandfather is the gentleman here in this photo, so who was he?”

The guest explained: “Born in 1920, a few miles from here listed in the army at 17 with a friend. He ended up in Dunkirk sank, torpedoed, escaped and got back to the UK.

“Fought through North Africa, fought all the way through France, Holland, Belgium, northern Germany and ended up in Berlin.”

Mark continued: “Those guys who liberated, as you said they were presented with the Legion d’Honneur, one of the highest awards that France can give.

“Just to say thank you to those young lads really who fought for the liberation of France. When did he get his medal?”

The man explained: “He got that medal on the 72nd anniversary of D-Day and he passed away 18 months after which is a real shame.”

Mark added: “However, he does actually see action all the way through the war and he does what all soldiers want to do, they want to bring home a trophy.

“He brings home first of all this map case with this incredible writing cause usually they’re just blank dated 1942.

“But it has inside it this and where did he get this piece of paper from?”

Mark brought out a letter written on a typewriter in fantastic condition.

The man explained: “When we first saw the map case, he said to me ‘There will be things in there that you’ll find interesting’ and amongst it was this particular document.

“He told me he found inside Hitler’s bunker, so by this time the story is that he was promoted to military intelligence, he spoke German and he was in a group who was asked to go into the bunker and recover anything of material interest and this was overflow from that he kept back.”

Mark was stunned and explained: “What it is, is absolutely incredible because it is a telegram from Adolf Hitler to Rommel in North Africa promoting Rommel to a General.

“I don’t know if that exists anywhere else in the world apart from this piece of paper to be honest with you.

“Then just to make that even more unbelievable, is you actually have the telegram reply from Rommel back to Hitler saying thank you.

“There isn’t a museum to do with World War Two that wouldn’t want that in its collection.