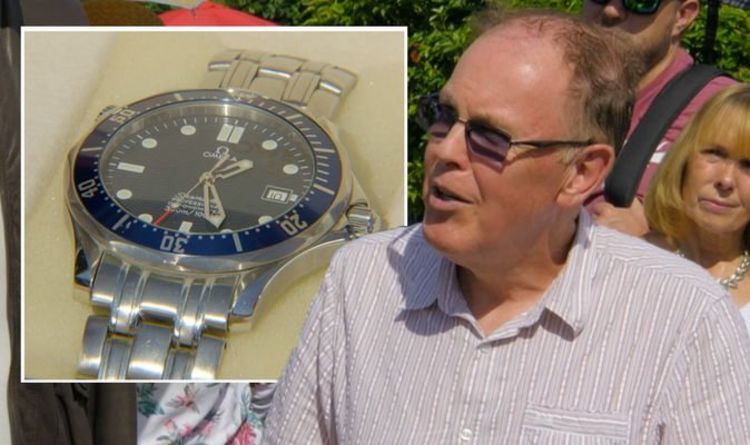 Early in 2019, the Antiques Roadshow team headed to Erddig in search of more bizarre and beautiful items. Expert Mark Hill was certainly thrilled when he set eyes on one guest’s collection of James Bond memorabilia, including an Omega watch and leather jacket, which he thought could fetch an incredibly high price if he were to sell it.

The guest began: “This jacket was worn by Daniel Craig and he wore this actual jacket in Casino Royale.

“That was his outing in 2006, he’s going down the runway on the wagon to diffuse the bomb and that was the jacket that he wore. It’s a really nice jacket.”

Mark replied: “So it’s a key moment, a really exciting moment. Bond doing what Bond does so well.

“And of course watches, we’ve got Q, Desmond Llewelyn, of course, playing him so famously.

“Watches and the technology and the gadgets are another part. So I presume this looks like it was worn by, it says, Pierce Brosnan.”

Wanting to know more, Mark probed: “So what fires you to collect this? I mean, why do you do this?

“Obviously, you’ve got that love seeing films, initially, as a young boy, but why are you collecting this?”

“It’s the music, the actor, the location shots, the actors with it,” the guest answered. “It’s the plots. It resonates with so many people.”

Going on to value the items, Mark told the guest: “For me, I think that items like this are not necessarily the sort of things that are going to have mass wide appeal,” waving at the editing equipment.

“I don’t see really, these going for much over sort of £1,000 or so. Key pieces, very recognisable from key moments in the film, absolutely great.

However, there was a much bigger surprise in store for the guest as Mark continued: “But I think things like the watch bring in another aspect.