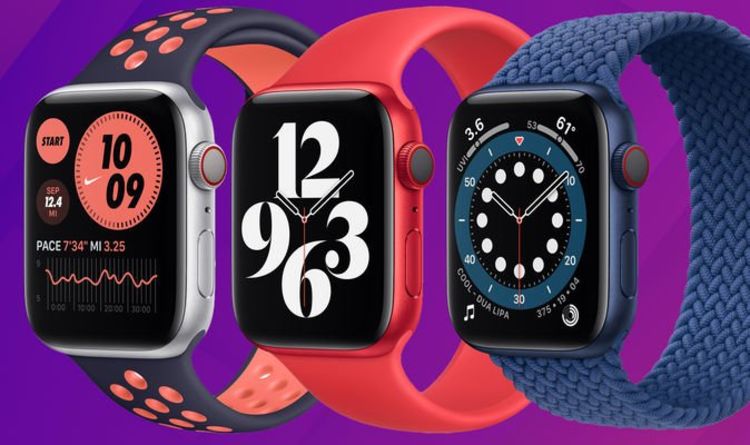 Apple Watch was the main focus of Apple’s latest gadget showcase (the company usually holds this event to unveil its latest iPhone – but fans hoping to hear all of the details about the new smartphone will be sorely disappointed). Apple CEO Tim Cook said he uses his Apple Watch everyday to stream music to his wireless speakers, opening his garage door, and checking the weather with a glance. Gone are the days when watches were only able to tell the time, Cook said wryly.

Before Apple offered a glimpse at new hardware, the Californian company highlighted how the electrocardiogram (ECG), heart-rate tracking and other health features have improved the lives of some of its customers – and even saved the lives of a number of wearers who were alerted to severe health issues thanks to the elevated heart-rate notification.

While the overall design of the Apple Watch doesn’t change with the Series 6, there is a nice new Blue aluminium finish. There’s also a Product (RED) and the Gold and Space Grey colours have been tweaked so that they’re slightly different from the Stainless Steel variants on the Watch Series 5. Aside from shiny new colours, the headline feature is the ability to monitor your blood oxygen level.

The process only takes 15-seconds, thanks to the Blood Oxygen app. The smartwatch will keep tabs on your blood oxygen levels in the background and store the recorded data in the Health app on your iPhone. Blood oxygen levels are a good measure of your general fitness levels – as it shows how well your respiratory and heart health.

Watch Series 6 is powered by a sixth-generation processor designed for the wearable, which is based on the A13 Bionic chipset buried inside the iPhone 11 and iPhone 11 Pro. It’s designed to be more energy efficient – while being 6x faster than the previous generation. Continuous elevation recording can be displayed in real-time and the always-on display (first introduced with the Apple Watch Series 5) is twice as bright when you’re not looking directly at the screen.

Both of these improvements were only possible thanks to the battery efficiency improvements in the S6 series chipset.

Alongside the Apple Watch Series 6, Apple also unveiled a more affordable Apple Watch SE with some of the same features (but with a smaller price tag).

But don’t worry if you’re not in the market to upgrade your Apple Watch quite yet. With the launch of the latest operating system, known as watchOS 7, your current Apple Watch is getting a number of really nifty updates. First up, you’ll be able to add multiple instances of the same Watch Complication to your Watch Face. So, if you use the same app for reminders and calendar appointments, like the phenomenal Fantastical 2 for example, you’ll be able to make it appear twice on the same Watch Face to get more information at a glance.

And if you can’t be faffed to spend hours perfecting the ideal Watch Face with the perfect text colour, background image, Complications and more – you’ll now be able to add a Watch Face from an online article, a recommendation from the App Store, or an iMessage from a friend or family member. And if you have put in the hard hours to perfect your Apple Watch and want to share your creation, you’ll be able to beam it to iMessage contacts by long-pressing on the Apple Watch touchscreen and tapping the share icon.

But the biggest change to the Apple Watch is the arrival of Sleep Tracking.

With watchOS 7, setting a preferred bedtime will kickstart a new feature called Wind Down which sets notifications to Do Not Disturb mode so you don’t need to worry about a phone call disturbing your slumber, the ping of an unwanted app notification or email. Of course, as always with Do Not Disturb – you can allow calls from select contacts to ignore the mode and if a contact tries to reach you multiple times in quick succession, Apple will switch the sound back on.

When your head hits the pillow, Apple Watch will now keep tabs on the quality of your sleep.

During the night, watchOS 7 will detect micro-movements from the accelerometer built into the smartwatch, which signals respiration during sleep, to intelligently work out when the wearer is sleeping and how much sleep they get each night. This data will be reported in the Health app. Like the existing Calories Burned, Steps, Heart Rate categories already gathered by the Apple Watch and stored in Health, there will now be a dedicated Sleep tab that tracks trends over time and lets you deep-dive into the previous night’s slumber.

Apple Watch will use its on-device machine learning to analyse your sleep patterns and offer some useful advice about how to maximise your next snooze. In the morning, when it’s time to wake-up, watchOS 7 will allow your Apple Watch to play a number of new alarm sounds. Or, if you’d prefer, Apple will let you use the Taptic Engine inside the wearable to buzz you awake – so your early-morning alarm won’t wake a sleeping partner next to you. Thoughtful, eh?