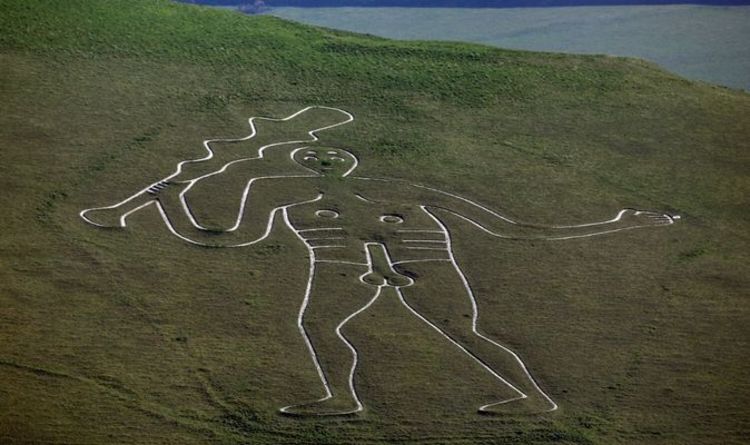 However, soil samples taken from the giant’s elbows and feet contain microscopic land snails shells that did not arrive in England until the 13th to 14th Centuries.

The investigation of the hill figure’s history is being undertaken by the National Trust to mark a century of overseeing the site.

Further tests of the soil samples set to reveal the chalk giant’s exact age was delayed by the coronavirus pandemic, with work now scheduled to conclude by the end of this year.

However, preliminary findings suggest the revised date of the figure’s creation could be as early as the Medieval period, although it is most likely to be in the early 1600s.

According to environmental archaeologist Dr Michael Allen, snails including the tiny vineyard snail Cernuella virgata spotted in the Cerne Abbas soil samples did not arrive in England until the late Medieval period.

Dr Allen told the BBC: “They arrived here accidentally, probably in straw and hay used as packing for goods from the continent.

“Sadly, this shows the giant is unlikely to be prehistoric or Roman — and more likely dates to Medieval times or later.”

The archaeologist also noted how two species of snail that first appeared in Britain in Roman times — and whose presence would have validated the giant’s assumed antiquity — were not found in the site’s soil.

Some experts assert the figure is of Celtic origin as the giant is stylistically similar to a figure found on a skillet handle in nearby Hod Hill that has been dated back to approximately 10 to 51 AD.

The Georgian antiquarian and clergyman William Stukeley, conversesly proposed the giant is instead a representation of the Roman god Hercules and the hill was first carved by the Romano-British culture after 43 AD.

And another theory proposes the giant was carved in the 17th Century by then landowner Lord Denzil Holles, possibly as a parody of Oliver Cromwell.

The club is suggested to be a reference to Cromwell’s repressive rule and the phallus to mock his Puritanism.

Historian Brian Edwards of the University of the West of England has credited the carving to Anthony Ashley-Cooper, the future third Earl of Shaftesbury, on land owned at that time by the Whig politician Thomas Freke.

He argued the giant was used as a propaganda tool for William of Orange, as an illustration of the King’s Herculean status.

This taps into a myth of the Roman god as as youth on the cusp on manhood, meeting the goddesses, Pleasure and Virtue.

Mr Edwards said: “The hero chose ‘to put duty first and [chose] the virtuous uphill path”, symbolised in the giant by his location on a hill side.

He added: “The impression made by Pleasure also remains very much in evidence, though, both in his outstretched left arm, signalling his leaving the vale empty-handed and in the largest illustration of an erect penis in the history of British art.”

The earliest-document repair of the giant was undertaken in 1694, coinciding with a celebration of William III’s birthday.