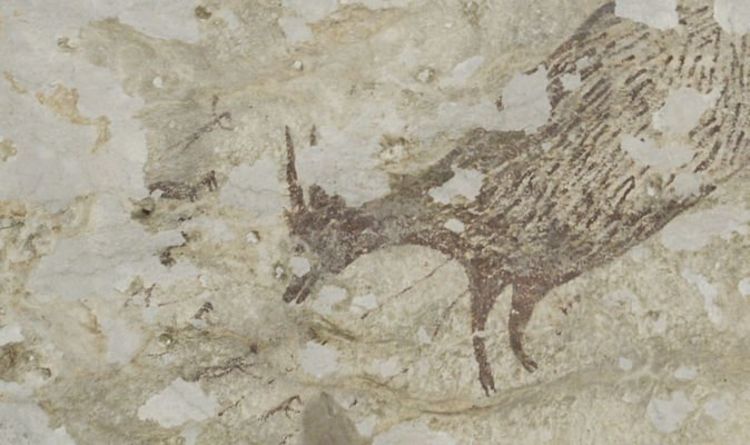 Experts believe they have uncovered the world’s oldest artwork in a cave in Sulawesi, Indonesia which dates back 44,000 years. The drawing appears to show a horned beast on the prowl, and proves that our Neanderthal ancestors were creating fictional stories. Experts believe the 4.5 metre wide paintings show wild animals being chased by a beast which is half human.

Using dating techniques, researchers from Australia’s Griffith University were able to date the drawing back at least 43,900 years during the Upper Paleolithic period.

The researchers wrote in the study published in the journal Nature: “This hunting scene is—to our knowledge—currently the oldest pictorial record of storytelling and the earliest figurative artwork in the world.

“(The scene) may be regarded not only as the earliest dated figurative art in the world but also as the oldest evidence for the communication of a narrative in Palaeolithic art.

“This is noteworthy, given that the ability to invent fictional stories may have been the last and most crucial stage in the evolutionary history of human language and the development of modern-like patterns of cognition.”

According to the team, the cave art, which was first discovered in 2017, may also show how early humans identified with spirituality and the ability to establish creatures which did not exist.

Associate Professor Adam Brumm said: “The images of therianthropes at Leang Bulu’ Sipong 4 may also represent the earliest evidence for our capacity to conceive of things that do not exist in the natural world, a basic concept that underpins modern religion.

“Therianthropes occur in the folklore or narrative fiction of almost every modern society and they are perceived as gods, spirits, or ancestral beings in many religions worldwide.

“Sulawesi is now home to the oldest image of this kind – earlier even than the ‘Lion-man’ from Germany, a figurine of a lion-headed human, which, at 40,000 years old, was until now the oldest depiction of a therianthrope.