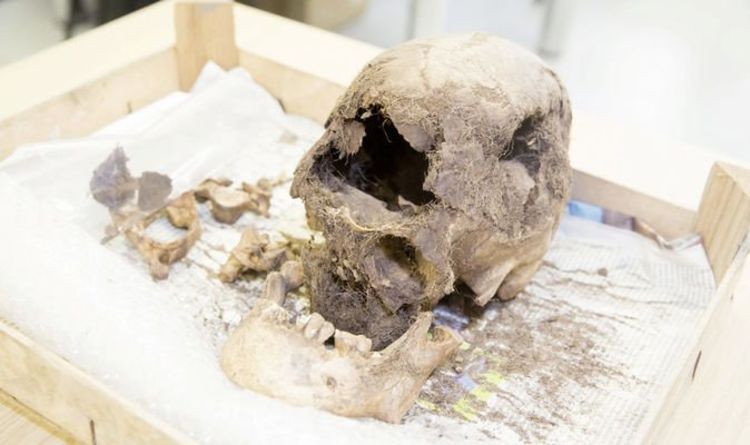 The remains were discovered on Chapelle Dom Hue in 2017, with researchers initially believing it was once an isolated monk who lived on the small island. However, further analysis and the discovery of his buttons nearby revealed he was a sailor from the Royal Navy.

The man was in his 20s when he died, and is believed to have been just 5’2” tall, according to Guernsey’s State Archaeologist Dr Phil de Jersey.

The archaeologist added: “The buttons themselves gave us the best information from him, leather buttons that we could use for dating and we even found a button specialist to look at them.

“They said it fits in with the date and the idea that he was a sailor from the Royal British Navy.

“It even looks like the design on them is an attempt at the Union Jack flag.

“We had thought he might be a monk, but the dates are all wrong.”

Mysteriously, both of the man’s hands are missing, which has led to several theories as to their whereabouts.

It was originally suggested that as he was found in land partially covered by water, fish could have nibbled away at them over the last 300 years.

Now, it seems the acidity in the soil in Chapelle Dom Hue could have accelerated the hands disintegration.

Dr de Jersey said: ”One of the problems we always have with bodies dug up in Guernsey is our soil is very acidic, so the bones get eaten up very quickly.”

Dr de Jersey said there is more work to be done to unravel the unfortunate sailor’s fate.

He said: “We would look at re-burying him up at St Saviour’s.

“But it would be nice to keep him a bit longer and possibly get more information from his teeth, which can reveal more geographical data and more about his diet.