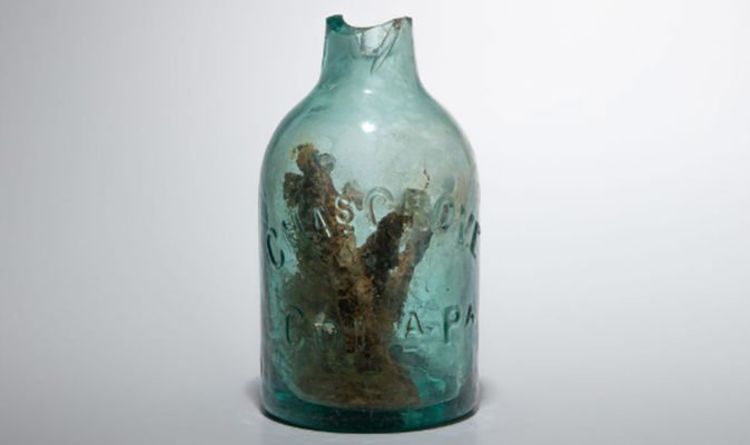 A glass bottle filled with rusty nails discovered in Virginia could be a rare ‘witch’ bottle used by soldiers in the US civil war to fend off evil spirits. The bottle stands at a height of five inches (13 centimetres) tall and three inches (eight cm) wide and was discovered near a civil war fort known as Redoubt 9.

The fortification was used by Confederate soldiers, ands was built in 1861, but was soon occupied by Union soldiers.

However, its the bottle in the site which has peaked the interest of archaeologists, who believe it could have been used by soldiers to keep them safe.

Archaeologists from the William & Mary Center for Archaeological Research (WMCAR) discovered the bottle near a hearth, and believe a Union soldier must have placed it there.

Initially, the researchers thought Union soldiers who were occupying the Confederate base used the glass bottle to store rusty nails.

But as the bottle was located near a hearth and containing rusty nails, the evidence hinted that it served a ritualistic purpose.

WMCAR director Joe Jones said in a statement: “There were a lot of casualties and fear during this period.

“The Union troops were an occupying force in enemy territory throughout most of the war, so there were plenty of bad spirits and energy to ward off.”

The tradition of ‘witch bottles’ originated in East Anglia, England, during the 16th and 17th centuries.

If a person thought they had been cursed, they would fill a glass container with bent pins and nails.

Anthropologist Christopher Fennell wrote in 2000: “The victim would bury the bottle under or near the hearth of his house, and the heat of the hearth would animate the pins or iron nails and force the witch to break the link or suffer the consequences.”

According to Mr Jones, the discovery highlights the sheer terror which the soldiers were going through at the time, and resorted to desperate measures in order to stay safe.

Mr Jones continued: “It’s a good example of how a singular artefact can speak volumes.