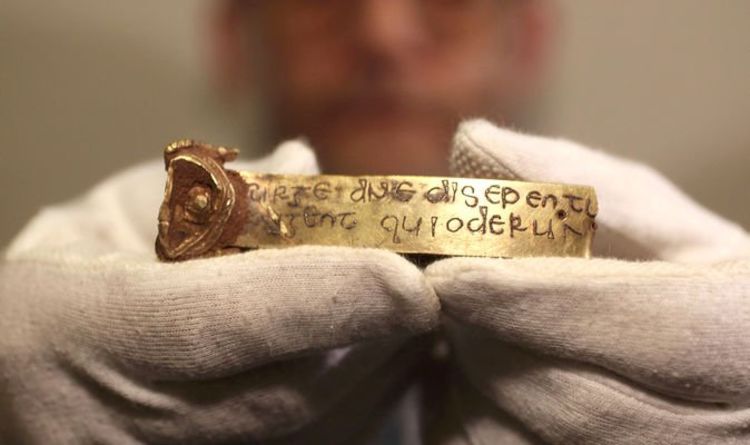 Experts believe the booty originated in a series of Dark Age battlefields, during conflicts between rival English kingdoms. Archaeologists now believe they were captured in several big mid-seventh century battles.

It is likely the treasures, dubbed the Staffordshire Hoard, were possibly seized during up to six substantial military encounters.

This treasure is thought to have been taken by the English midlands kingdom of Mercia from Northumbria, East Anglia and possibly Wessex.

The hoard – the greatest Anglo-Saxon golden treasure ever found – is one of the most important archaeological discoveries ever made in Britain.

After 10 years of detailed research, archaeologists are to publish a complete account of the hundreds of high status gold and silver objects found by a metal detectorist a decade ago in a field in southeast Staffordshire.

The resulting book, published by the world’s oldest historical organisation, describes all of the hoard’s 700 objects, including 4kg of gold items and 1.7kg of silver.

The ancient artefacts amazingly do not seem to reflect the wide range of gold and silver artefacts which would have existed in Anglo-Saxon society.

Research instead suggests the material is almost exclusively military in nature.

Even one of the small number of ecclesiastical objects in the hoard appears to have been of a potentially military character.

Highlights of the Staffordshire Hoard include golden fittings from up to 150 swords, gold and garnet elements of a high-status fighting knife.

Other notable items include a spectacular gilded silver helmet, an impressive 30cm-long golden cross, a beautiful gold and garnet pectoral cross, a probable bishop’s headdress and what is thought to have been a portable battlefield shrine.

Dating from the mid-seventh century AD, its presence in an otherwise predominantly military hoard suggests its religious owner may well have been performing a supporting role on a battlefield.

The headdress bears no resemblance to later medieval or modern bishops’ mitres and will likely trigger debate among historians as to its stylistic origins, due to its similarity to those worn by early medieval clerics.

The discovery may therefore prompt scholarly speculation that the style of headwear worn by senior Christian priests in the early medieval period could have been at least partly inspired by perceived biblical precedent.

The headdress, crafted in gold and inlaid with garnets and white and dark red glass, dates from the period when Christianity was being re-established across many of the local kingdoms that would eventually become England.

It represents the status and prestige of the Church – but, significantly, it is decorated with typical pre-Christian Anglo-Saxon semi-abstract animal designs as well as seven Christian crosses.

If indeed the archaeologists are right in believing it to be potentially an early-to-mid-seventh century bishop’s headdress, it would have been worn, perhaps during royal or other ceremonial events, by the first or second generation of clergy involved in the re-Christianisation of what is now England.

The portable shrine , potentially presided over by the owner of the headdress or a similar senior cleric, was probably designed to be carried into battle on two horizontal poles.

Only seven elements of the shrine, all made of gold, have survived.