Are Meghan Markle and Prince Harry ‘competing’ with Kate and William on Instagram? 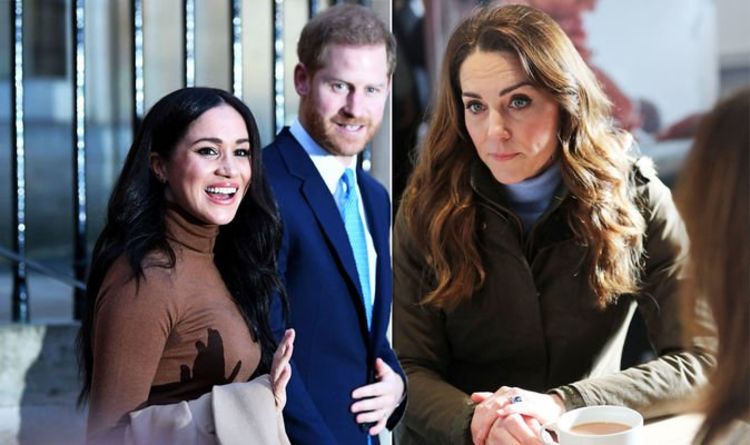 Harry and Meghan have made it clear they intend to use their Instagram as an important tool in their media strategy going forwards. Their website states: “The Duke and Duchess of Sussex will continue to have a social media platform. They look forward to continuing their use of social media and believe that their updated media approach will enable them to share more, with you, directly.”

However, the timings of some of Meghan and Harry’s social media posts has had some asking questions.

In January, Daily Express royal correspondent Richard Palmer remarked on his Twitter: “Wow, what unfortunate timing that once again, just as a senior member of the Royal Family was heralding an important initiative, the Sussex Royal Instagram account kicked into life with some PR pictures at the very same moment.”

He was referencing the moment the SussexRoyal Instagram account posted some old images from a previous visit to the Mayhew Centre on the same day Kate’s UK tour for her new initiative began.

Other Twitter users were quick to chime in too. One said: “It’s so obvious that every time KP posts something SR also posts too!”

Another said: “Is it unfortunate or deliberate? I think it is the latter.”

“Meghan posted the IG post of them leaving on Kate’s birthday,” one said.

This is not the only occasion the SussexRoyal account has been accused of posting at the same time Kate Middleton and Prince William have. Meghan and Harry took to Instagram to announce their bombshell plans to “step down and senior royals” and to live for part of the year in North America.

However, the shocking news, which caused a huge and seminal rift in the Royal Family, coincided with Kate’s 38th birthday. On the same day the SussexRoyal Instagram account left a message on Kensington Palace’s, reading: “Wishing a very happy birthday to The Duchess of Cambridge today!”

However, one Instagram user comments: “Yeah you kind of stole her birthday thunder.”

On Twitter one commented: “You know Meghan & Harry posted their post in time to take the attention from Kate’s birthday.”

Another Instagram clash came on Prince Louis’ first birthday, when a photograph of the infant taken by the Duchess of Cambridge, was posted on the Cambridge’s Instagram.

Just a few hours later Meghan and Harry published a number of pictures from their Africa trip.

During Wimbledon 2019, Kate took to the pitch to make present the winner’s trophy as an All England Club patron.

However, shortly after this moment Meghan and Harry took to the red carpet for the London Lion King premiere.

It claimed the couple felt restrained by having to comply with royal guidelines when it comes to their social media posts, and also did not wish to share their images with various British publications.

“The understanding with the Royal Rota expects that if Their Royal Highnesses were to release a photo that has never been seen, they would be expected to give the image to The Rota (of which four of the seven are UK tabloids) simultaneously or in advance of their own release.

“This formula enables these select publications to profit by publishing these images on their websites/front pages,” the site explained.

The couple added they felt this made it “challenging” to “personally share moments in their lives directly with members of the public.”

BySagittarius (Nov 23/Dec 21) A colleague is starting to take it for granted that you will include some of their responsibilities in your own work...
Read more
Lifestyle