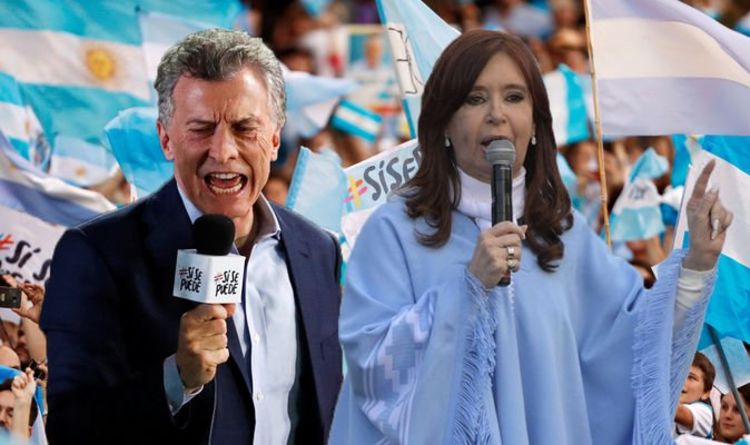 Incumbent President Mauricio Macri did not fare well in the August primaries – known as the PASO – as Alberto Fernández—along with his vice-presidential partner and ex-President Cristina Fernández de Kirchner— took 47.7 percent of the vote. This was 15 points higher than President Macri and his running mate, Miguel Ángel Pichetto.

For a new President to be elected, the winning candidate in today’s election needs to secure 45 percent of votes, or 40 percent and a 10-point lead.

If this is not achieved, a run-off will take place on November 24, with the President due to be inaugurated on December 10.

The conservative Mr Macri won backers with plans to reform Argentina’s notoriously closed economy with trade deals and a successful push to lure foreign investment into energy projects and infrastructure.

However, Mr Macri’s reform plans were badly hit in 2018 when a currency and debt crisis forced him to strike a deal with the International Monetary Fund (IMF) for an eventual $ 57 billion to help the country to pay its bills.

Below are the latest updates on the Argentina elections, all times in GMT.

Mauricio Macri reelection appears to have been sabotaged by a tanking economy and the resurrection of one of the country’s most polarising politicians.

Fernández needed to win at least 45 percent of the vote to avoid a runoff next month.

The election, on a day where Uruguayans and Colombians were also going to the polls, attracted international attention due to Fernandez’s running mate, former president and Latin American leftist icon Cristina Fernández de Kirchner.

12.00am update: Polls have closed in Argentina’s presidential election.

The vote was held amid a deep economic crisis that has left a third of the population in poverty.

Official results are not expected to be released until about 21:00 local time (00:00 GMT).

Mr Macri had trailed behind his challenger in pre-election polls and was trounced by the opposition in primary elections in August.

Ahead of the official results, Mr Fernández’s Frente de Todos party said it was confident of victory.

All signs are pointing to a defeat for Macri, who has overseen Argentina’s descent into economic crisis and recession, with the first initial results due at around 9pm Buenos Aires time (12.00am UK time).

Results of voter surveys put Fernández, whose running-mate is ex-president Cristina Fernández de Kirchner, in the lead shortly after polling closed at 6pm local time by a substantial margin.

However, local media did not release percentages following a ban on doing so under Argentine law.

A court ruled results can only come out once the count reaches 10 percent in the four top districts.

Polls across the country are due to close at 6pm local time (9pm GMT) with results expected at around 9pm local time (midnight GMT).

7.20pm update: One voter reveals why he picked Mr Fernandez

Carlos Berenguer, 71, outside a polling station in the district of Palermo in Buenos Aires revealed why he voted for relative newcomer Mr Fernandez.

He said: “I voted for Fernandez because I see people just very unhappy in the street and I want a country with a better economy and more social support.”

6.08pm update: How does voting work in Argentina?

As well as the presidency, voters will be selecting 130 national deputies and 24 national senators.

There will also be new governors selected in three provinces, regional mayor elections and Buenos Aires will elect its head of government.

In order to win the first round outright, the Presidential candidate needs to achieve 45 percent of the vote – or 40 percent and a 10 point lead.

If there is no outright winner, there will be a runoff vote, which will be held on November 24.

In Argentina for residents over the age of 18 voting is mandatory.

For those aged between 16 and 18 and over 70-year-olds, voting is optional.

There are almost 34 million registered voters in Argentina.

Mr Fernandez, a relative unknown until this year outside Argentine political circles, holds a 20-point lead in most opinion polls after thumping President Macri in an August primary, a shock result that rattled markets as investors feared a populist political shift.

That result – and the sharp market crash that followed – radically altered the dynamic of the race, pushing the country further into economic crisis and making Mr Macri the underdog in an election that most had thought would be a close-run affair.

Alberto Fernández, 60, is a centre-left ex-campaign strategist, who began his presidency bid in May.

He is a career politician, and his appointment as the centre-lefts candidate came as a surprise as many believed former president Cristina Fernández de Kirchner would be put forward.

She is a senator for Buenos Aires Province, and should Mr Fernández win would become his vice president.

3.56pm update: What are the main issues for voters?

The economy has taken center stage with the country in the grip of recession for most of the last year, the outlook for growth darkening, annual inflation over 50percent, job numbers down and poverty up sharply.

Nohelia Pol, 31, a trader in Buenos Aires said she was going to vote for Mr Fernandez, saying he had “fairer” policies to help people across the social spectrum.

She said: ”I also hope that he will be able to get out country’s economy going again a bit and get us out of the debt generated by our current president Macri.”

If the results of the primaries ring true again in today’s general election, it would hand Alberto Fernández the presidency outright.

Voters will choose presidential candidates, along with deputies, senators, governors and local leaders.

More than a 10 point lead would avoid a run-off vote taking place on November 24.

Across Argentina, the polls opened at 8am local time (11am GMT) and will close tonight at 6pm local time (9pm GMT).