'Argentina has no shame!' Falkland Islands fury over 'pathetic' bid to exploit coronavirus 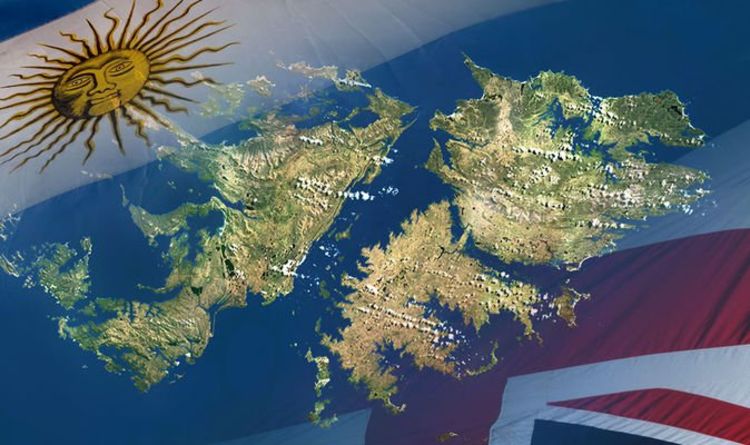 Sabre-rattling Argentinian officials have been accused of using a “global tragedy to make a political point” after they included the Falkland Islands’ coronavirus figures in their own because it is in a “national territory”. It comes after five cases of COVID-19 were confirmed at the RAF base Mount Pleasant on the archipelago, which Argentina refers to using the Spanish name Las Malvinas.

Health bosses from the South American country say they have been forced to rely on the figures released by officials from the island because the “illegal occupation” of the islands makes it impossible for them to do their own checks on the “impact of Covid-19 in that part of Argentina”.

Argentina’s Falklands secretary Daniel Filmus said: “In accordance with our constitution and current legislation, Argentina will include those infected who are in the Malvinas in its statistics because they are in national territory.

“The government will register positive cases in the archipelago as part of the population of the province of Tierra del Fuego.”

But Falkland Islands residents hit back on social media, accusing Argentina of being “pathetic” and “delusional”.

Falkland Islands resident Lisa Watson, editor of its weekly paper Penguin News, raged on Twitter: “The Argentine government quite literally has no shame.

“Using an horrific global tragedy to make a political point.

“I can’t believe the people approve of their government’s behaviour in this case.”

Another joked: “So they’re paying for their healthcare are they? Thought not.”

READ MORE: ‘If we don’t take Falklands while Boris is sick we are A*SHOLES!’

Another social media user added: “It’s just another example of how pathetic, delusional and idiotic the kirchnerite narrative and its followers are.”

As soon as the coronavirus began to circulate on the Falkland Islands, the Argentine Government offered to send diagnostic test kits and enabled citizens of the island into Argentine hospitals.

Argentina’s Foreign Ministry said: “In the name of the Argentinian government, the Secretary of the Malvinas, Antarctic and South Atlantic Daniel Filmus contacted the British ambassador in Buenos Aires Mark Kent today to offer its willingness to assist the island residents as a result of the situation generated by the coronavirus pandemic.

“He mentioned the possibility of co-operating with the residents by sending fresh food, medicines and tests to detect the virus which causes Covid-19, as well as making available facilities to undertake humanitarian flights if necessary and provide care in medical centres in mainland Argentina.”

In an interview with Sputnik, the secretary of the Argentine Chancellery for the Malvinas Islands Daniel Filmus, said it was a “humanitarian” gesture that had nothing to do with the claim of sovereignty over the islands.

Argentina’s President Alberto Fernández took to Twitter, and said: “Malvinas belong to Argentina by history, geography, law, heart and our fallen and ex-combatants.

“Today, as every April 2, we claim our sovereignty and say, as always, Malvinas Argentinas!”

Because the Falklands is such a remote archipelago, British officials are monitoring the situation very closely, as well as that of the other 13 British overseas territories.

All testing has to be processed in the UK, meaning the Falklands are having to wait several days for each batch of test results.

One is still in hospital, another has just been discharged, and three are in isolation at the RAF base.

It added: “Our key objective is to protect lives. In the face of this global pandemic, the primary focus is to manage the immediate health risks.