Ariana Grande REVIEW: Sweetener tour has plenty of spice but can’t sustain it 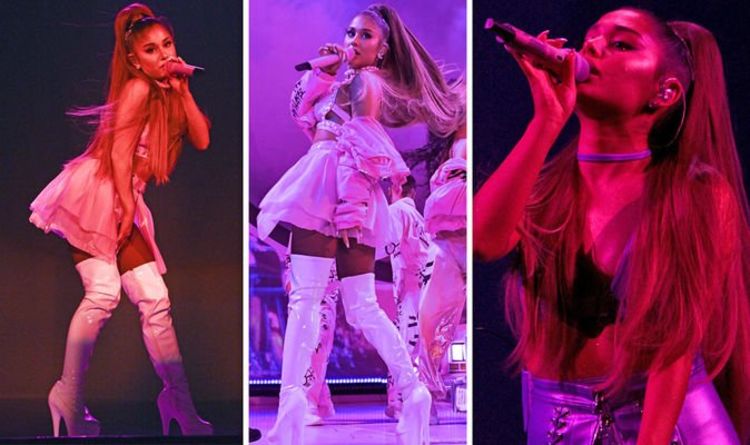 There’s no mistaking the wholesome excitement filling the O2 as what feels like half the of the teenage female population of the UK shriek deafeningly at the slightest hint their idol might be about to take to the stage.

The supportive atmosphere is such that when Ariana Grande does emerge from beneath the stage, the key figure in her very own Last Supper tableau, God Is A Woman cues, rather fittingly, instant worship from her fans, expressed via reverent screaming.

Despite her new, more mature and sexualised incarnation, there’s a purity to Grande’s show that stems simply from her refusal to allow anything to take precedence over her vocal talent.

Before the opener — her 10th top ten single on the Billboard Hot 100 — is done, it’s clear her vocal abilities sit in pop’s prestigious top tier, instantly calling to mind talents like Mariah Carey and Lady Gaga.

As if to drive the point home, she throws some whistle tones in at the end of God Is A Woman for good measure.

In addition to the sleek styling, from choreography to costumes, lighting and set, it’s Grande’s skill which ties the night together as a single polished product.

Yes, there’s latex thigh-highs and yes, there’s a ginormous moon-like orb suspended mid-air above the stage but, throughout the course of the night, never more than a minute goes by before the crowd are snapped into the present moment by a startling run of notes, a powerful belting delivered un-self-consciously by the woman of the hour, strutting about the stage like it’s hers and hers alone.

Fans are treated to mega hit after mega hit as Grande sashays and croons her way through Bad Idea, Break Up With Your Girlfriend, I’m Bored, Sweetener and the irrepressibly danceable Side to Side.

It’s a glossy performance, from her incredible dancers to the every sweet spot the visuals hit and is undeniably on the more sophisticated end of the live pop spectrum.

Worth noting also that the skill it takes to execute a full night of slick dance routines in eye-wateringly high heels should not be underestimated.

And Grande does so without a hint of effort or world tour weariness, barely stopping moving for the entire show.

Predictably, however, things plateau somewhat around the two-thirds mark as her catalogue of truly great songs nears exhaustion and it becomes evident which are being saved for the big finish.

The lull is punctuated by one of the night’s rawer and more intimate moments as Grande seats herself on the stage for the seemingly highly personal Needy.

Despite difficulty keeping the impact levels up, she seems to mature over the course of her own gig, taking the audience on a journey which moves from sparkly camp numbers to quieter, simmering periods where fans are encouraged to pause and take stock of the turns the popstar’s own life has seen over the past couple of years, invited to take an step closer emotionally.

Having spent the night circling nearer and nearer to the centre of Grande’s world, her feelings and her experiences, it’s with 2016’s Dangerous Woman that spectacular vocal talent finally finds synchronicity with her letting down her walls, bathing onlookers in the beam of her performance at full power.

From there, the momentum’s back as she tumbles joyously into Break Free, she and her troupe gleefully toting pride flags as confetti fills the air.

The distance the audience have covered during the evening in order to be so much closer to what feels like Grande’s truth is at its most apparent when she launches into No Tears Left To Cry, the first track to be released following the tragedy and trauma of the bombing at her Manchester Arena show in 2017.

After a brief departure from the stage, she’s back to wrap up with her chart-topping single Thank U, Next, concluding an hour and a half’s journey through her world via the vehicle of her creativity and borne along, ever so effortlessly, by her unquestionable talent.