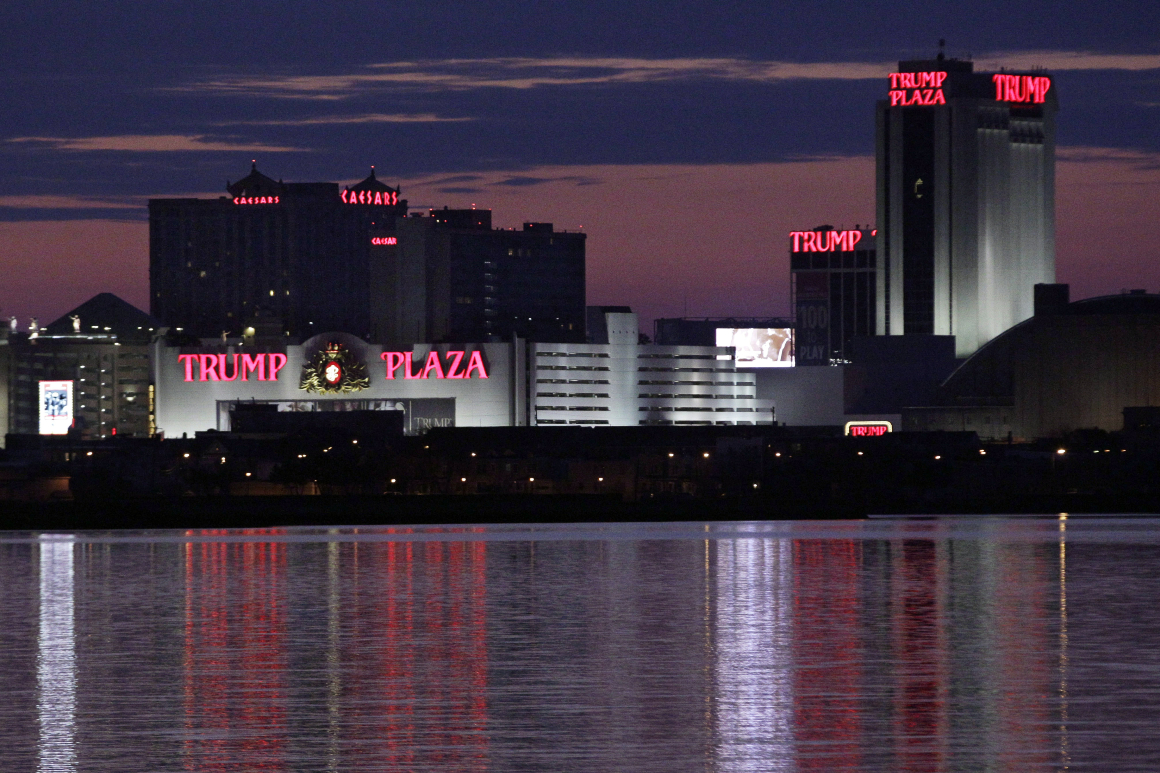 Atlantic City was finally on the mend.

The glowing seaside resort, the East Coast’s first and only gambling mecca, had been devastated by a cascade of casino closures that dimmed its skyline and pushed its local government to the edge of bankruptcy in the last decade. But the city of 38,000 was finally rebounding after the situation grew so dire former New Jersey Gov. Chris Christie forced a state takeover in 2016.

Two of the five casinos that shuttered — including one that used to have President Donald Trump’s name emblazoned across the marquee — reopened under new ownership and branding in recent years. Revenue was up, with the casinos having their best February since 2011. It was starting to feel like a new era for the city. Even Trump’s name had been scrubbed from the boardwalk, years after he fled town.

Then came the coronavirus.

In March, Gov. Phil Murphy ordered all casinos closed and all major events canceled, a near complete shutdown of the city’s economy. Like in Las Vegas — in cities across the nation that have been similarly devastated by virus-induced lockdown — the damage has been severe and immediate. But, unlike in some other tourist destinations, Atlantic City was in a rough position to begin with. Now there are likely more dark years to come.

“We have the potential of an Armageddon in Atlantic City,” George Tibbitt, the president of the City Council, said in an interview.

Atlantic City and its suburbs — along with much of southern New Jersey — has been spared the worst of the coronavirus infections that have devastated the northern and central parts of the state and neighboring New York, with 964 cases and 41 deaths reported since early March.

But local leaders and economic analysts aren’t taking much comfort in that. Even if the virus doesn’t hit the area as hard as it has in North Jersey, the economic disaster for Atlantic City looks even more pronounced, and could reverberate long after the virus subsides.

The casinos have been closed for more than a month. A planned expansion of Stockton’s campus in Atlantic City, a sign of hope the city could someday be less reliant on the volatile gaming industry, has been put on hold. So, too, has the construction of an aviation technology park at the Atlantic City International Airport.

About a third of the workers in the Atlantic City area are employed in the leisure and hospitality industry, compared to about a tenth of the workforce statewide. Most of the 27,000 people employed by the city’s casinos are out of work, many of whom live in the city, which has a 38-percent poverty rate.

“I’ve lived here my whole life. Nothing even comes close,” said Bob McDevitt, president of UNITE HERE Local 54, the casino workers’ union. “This is akin to having a steel mill town and the steel mill shuts down.”

Businesses that indirectly depend on the industry — restaurants, hotels and shore rentals — are suffering as well, potentially costing thousands more jobs. The ratings agency Fitch warned the Ocean Resort casino — which moved into the sleek, tall glass tower that was home to the short-lived Revel before it was shuttered in 2014 — could face "eventual closure."

Casino workers, many of whom had already exhausted their unemployment benefits during the lean off season, last week lined up for nearly a mile to pick up food kits distributed by volunteers for their union.

“Nobody envisioned this going to this point when we shut down on March 16. Nobody thought it would be like this,” said Jeff Payne, a server at a lounge for high rollers at Caesars Atlantic City Hotel & Casino and a shop steward for the union. “[People were] thinking maybe two weeks, three weeks tops. Now, as reality is setting in, people are really, really scared.”

Even when the casinos get the green light to reopen, workers don’t expect to be fully employed for months or perhaps even a year as the summer high season will at best be shortened by weeks.

“I expect probably half the staff are probably going to be employed,” Payne said.

“When properties do eventually open to the public, it will likely be gradual and scaled to match consumer demand,” Pandit said. “Consumer confidence and comfort with travel will likely take the longest to rebound, and it may be some time before visitor volume returns to pre-pandemic levels. We likely won’t see a return to pre-pandemic levels in time for the 2020 summer season, but do anticipate looking at a more ‘normal’ season in 2021.”

The gaming industry has been able to depend on at least one financial lifeline: Online gambling, which accounted for more than 41 percent of all casino revenue in March, or $ 64.8 million. That’s still not enough to make up for the $ 137.7 million drop in revenue from brick and mortar casinos.

“[Online gambling] already, in my judgment, was showing the impact that if people were able to gamble from their bedroom in Livingston, N.J., or on their toilet seats in Haddonfield, N.J., they don’t have to come to Atlantic City,” he said. “A lot of people, not just temporarily but maybe permanently, will say ‘Why bother taking the drive to Atlantic City when I can gamble from the convenience of my own home?‘”

Atlantic City’s finances — largely controlled by the state since 2016 and dependent on payments from the casinos and $ 50 million a year in state aid — are a huge question mark.

In 2016, when casinos were closing and city property values were crashing, a state law set up a payment in lieu of taxes (PILOT) program under which casinos made direct payments to the city, school district and county based on annual revenue.

Tibbitt, the City Council president, fears those payments could decline from the current $ 150 million — which goes to all three entities but primarily to the city — to $ 90 million, the lowest amount possible.

Tibbitt said he wants the state to step in to ensure the casino payments don’t drop so steeply, and to guarantee state aid to help fund the city’s $ 207 million budget doesn’t disappear as the state itself struggles with budget problems because of the pandemic.

“We could lay every employee off and not make up for it. I could lay off every cop, fireman, 911 operator, public worker and still not reach that $ 60 million [cut],” he said. “We have the potential of an Armageddon in Atlantic City.”

Lisa Ryan, spokesperson for the state Department of Community Affairs, said in a statement that “we are committed to ensuring the robust performance of government in Atlantic City and that the City is strong and equipped to succeed in the future.”

While the city is still coming to grips with the economic crisis, voters will be asked on May 12 to decide whether to scrap Atlantic City’s current form of government, in which a mayor is directly elected every four years. Instead, the proposal for change — publicly lead by McDevitt and former state Sen. Raymond Lesniak — would reduce the number of council members from nine to five, no longer allow for the direct election of the mayor and give the day-to-day responsibility of running the government to a council-appointed manager.

Lesniak, who represented a district about 110 miles north of Atlantic City for 40 years, said he decided to pursue the change after his friend, Morris Bailey, owner of the Resorts Casino Hotel, complained that he wanted to build a $ 350 million entertainment complex next to his casino but that he didn’t have enough faith in the current city government to go through with it.

The referendum, originally scheduled for March 31, was pushed back a month-and-a-half and will be conducted entirely through vote-by-mail ballots because of the pandemic. Bailey is a major financial backer through a super PAC.

“It’s a den of iniquity and it has been for decades, and that’s why the city has never done anything for the residents who have not benefited from the attraction of the casinos,” Lesniak said of the city government, which saw its last elected mayor, Frank Gilliam, resign last year after admitting stealing $ 87,000 from a children’s basketball charity — the latest in a long line of disgraced city officials.

Marty Small, the city’s acting mayor whose job would be eliminated, opposes the change.

“You have a lot of unions and casino execs and everyone else who have put their neck on the line in trying to change Atlantic City’s government,” said Small, who was appointed by the City Council after former Mayor Frank Gilliam pleaded guilty to stealing money from a children’s basketball charity.

“We’re glad that they’ve exposed themselves for who they truly are. You know Atlantic City is going to show up and show out in a big way,” Small said.

As bleak as things look, local politicos, workers and analysts POLITICO spoke to were confident the city will make it through this latest crisis.

“With so much positive momentum building for Atlantic City, and all the excitement coming into Summer 2020, to see that trajectory change so rapidly is a bit of a blow,” Pandit said. “But if Atlantic City is anything, its a survivor. The city will get through this and come out stronger.“