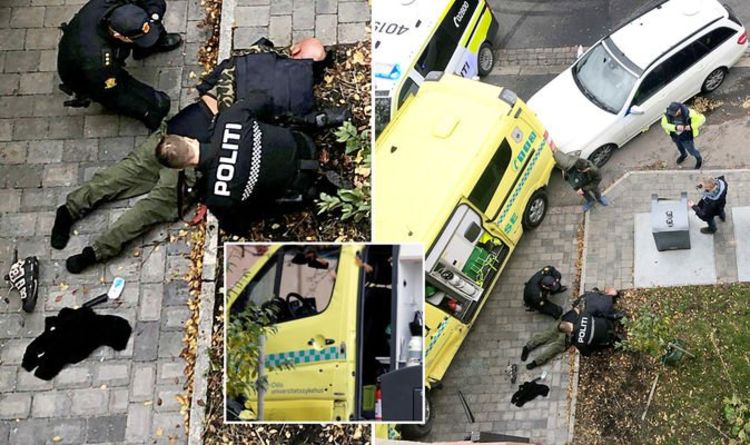 Emergency services raced to the scene and are trying to calm the situation in the city. Police said they had arrested a suspect but are hunting a female accomplice. Witnesses reported hearing gunshots. A resident tweeted: “An ambulance was stolen in Oslo and is now out there hitting people.” Several people are reported to have been injured. Police have not said if the incident is being treated as a deliberate attack.

Norwegian broadcaster NRK said several people were hit by the stolen ambulance including baby twins and their mother who was pushing them in a stroller at the time.

NRK said police are looking for another person who may have been involved but authorities would not confirm the report.

Police told Norwegian paper VG two people were involved in the hijack and one has been taken into custody.

A nearby primary school is on lockdown as the hunt for the remaining suspect continues.

Roads in Torshov to the north of the Norwegian capital have been closed and a police helicopter is circling overhead.

Police chief Tor Grøttum told NRK: “The situation has not been cleared. We have arrested a man and are searching for a woman.”

Several people have been rushed to hospital including two children, a woman and an older couple.

Oslo University Hospital confirmed two children have been taken to the hospital.

Spokesman Anders Bayer said: “One of the children has minor injuries, the other is not clear.”

The ambulance was stolen from Rosenhoff in the Helsfyr area of Oslo just after 12.30pm local time.

An eyewitness said: “Three or four police cars crashed into the hijacked ambulance.

“Three of the cars were completely destroyed.”