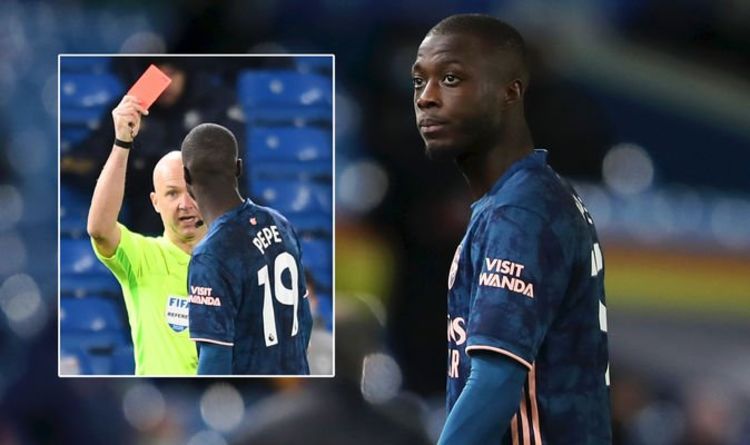 Arsenal attacker Nicolas Pepe has issued a public apology after his red card against Leeds United on Sunday. The Gunners drew 0-0 but had to play almost the entire second half with just 10 men at Elland Road.

Pepe saw red after an altercation with Ezgjan Alioski on 52 minutes, with the winger pushing head into the Leeds player’s face.

The 25-year-old Ivory Coast international and Macedonia’s Alioski were both subjected to vile racist abuse post-match with the clubs both releasing statements condemning social media comments.

“This is completely unacceptable and we will be working with the police and authorities to do everything we can to trace and prosecute the culprits.”

PREMIER LEAGUE ON TV: Get NOW TV’s Sky Sports season pass now and save 25 per cent

Gunners boss Mikel Arteta was fuming with Pepe post-match in Yorkshire with his dismissal now ruling out of clashes with Wolves, Tottenham and Burnley.

He declared the incident was “unacceptable” and insisted Pepe had “let down” his team-mates.

“Yesterday I have let my team down at a crucial time of the game and there is no excuses for my behaviour,” he said.

“I am deeply sorry and would like to apologise to the fans, my team-mates, my coach and everyone else at the club.”

Club-record signing Pepe is still battling to live up to expectations at the Emirates having joined the Gunners for £72million in the summer of 2019.

Since then, he has produced 11 goals and 12 assists in 55 games and Leeds was just the Ivorian’s second Premier League start of the current season.

But Arteta’s reaction to his red card at Leeds indicates he may have to work to do to get back in the Spaniard’s good books.

Arsenal return to action against Molde on Thursday night (5.55pm) with versatile attacker Pepe having scored in both of his last two Europa League appearances.

In the Premier League, the draw at Leeds leaves Arteta’s men sat 12th and five points off fourth-placed Leicester after nine games.