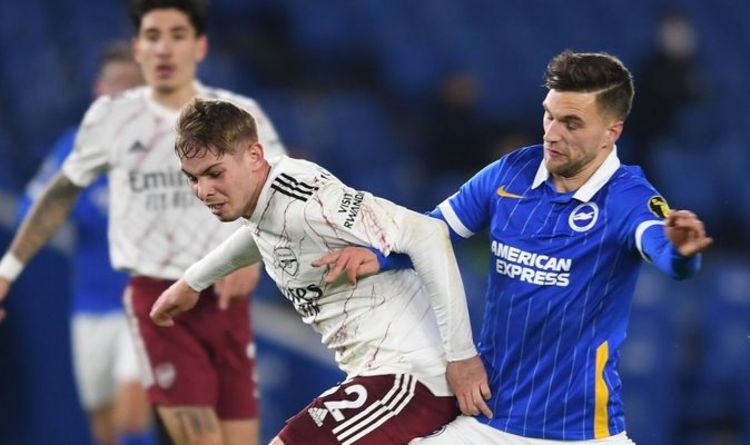 There has not been much to smile about at Arsenal in recent weeks but the club’s young guns have proved to be Mikel Arteta’s light in the dark. The Spaniard has not been shy to throw the team’s academy stars in at the deep end and they’re yet to let him down. Bukayo Saka is now one of the first names on the team-sheet while Gabriel Martinelli is slowly establishing himself as an undroppable figure upon return from injury.

While both have been excellent, there is a new name beginning to steal their thunder in the form of Emile Smith Rowe.

The attacking midfielder was making his second successive start tonight in the Premier League at Brighton and while there were clear flaws in his performance, the teenager offered glimpses of an exciting future at the club.

It’s been very clear from the outset that Arteta is a big fan of Smith Rowe, particularly in the wake of an impressive loan spell at Huddersfield.

He’s a player who has shown maturity beyond his years whenever called upon and he’s made huge strides under Arteta’s coaching, most notably in the Europa League.

Now Arteta has taken his trust in the player to a whole new level and tonight the Arsenal boss put his neck on the line to keep Smith Rowe in the starting line up.

Yet when it comes to Smith Rowe, he brings far more than that to this Arsenal team.

He has an engine and his ability to drive with the ball pulls the opposition defence out of joint, creating huge space for the likes of Pierre-Emerick Aubameyang.

Arteta appears to have given Smith Rowe plenty of freedom and that was again evident tonight. He was drifting all over the pitch and taking up positions in half spaces, drawing fouls.

Lewis Dunk and Alireza Jahanbakhsh were both booked for stopping him in his tracks and that appeared to be the only way Brighton could contain him at full speed.

Smith Rowe is slowly but surely proving to be yet another unique and maverick talent, who with the right coaching, is a frightening prospect.

Much has been made about the decision to omit Mesut Ozil from Arsenal’s Premier League and Europa League squad but now they have found their No 10 for the future.

Smith Rowe has idolised the World Cup winner during his time at the club and now he is ready to become his successor to save Arsenal millions in the transfer market.

The England under-20 star already looks right at home in this Arsenal side and there is a clear pathway for him to nail down a spot in Arteta’s XI.

There are still plenty of rough edges to his game but Arteta will relish the chances to develop his unpolished gem.

His emergence to the limelight just goes to show that supporters can still feel optimistic about the “exciting future” that was promised by Edu under Arteta.