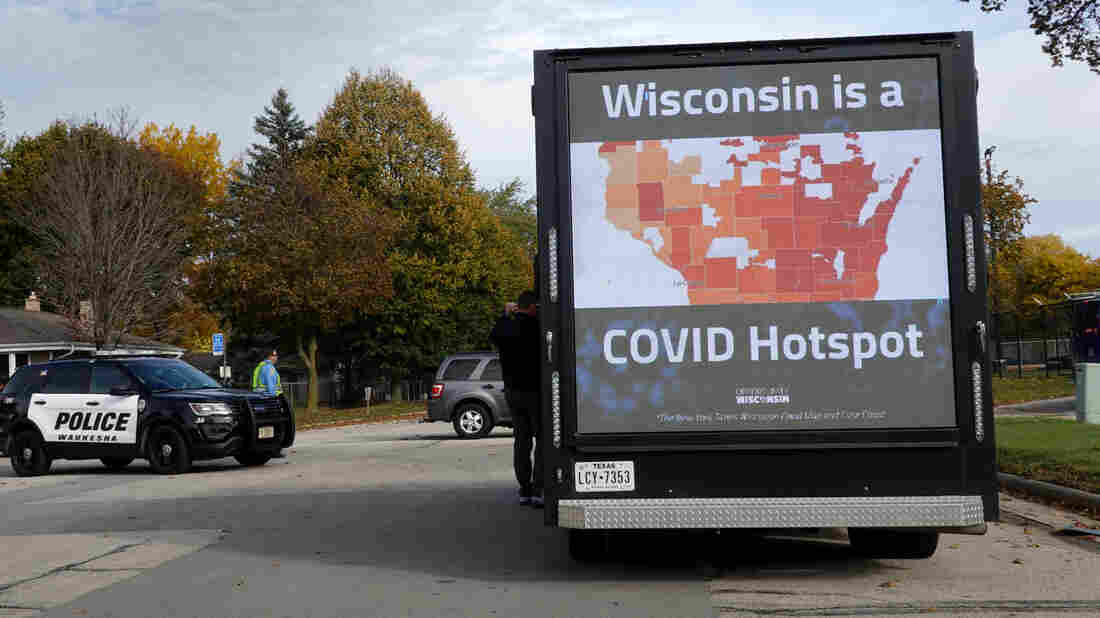 Police stand guard outside of a rally with Vice President Pence on Oct. 13 in Waukesha, Wis. The state is experiencing a surge of COVID-19 cases, threatening to overwhelm rural hospitals. Scott Olson/Getty Images hide caption 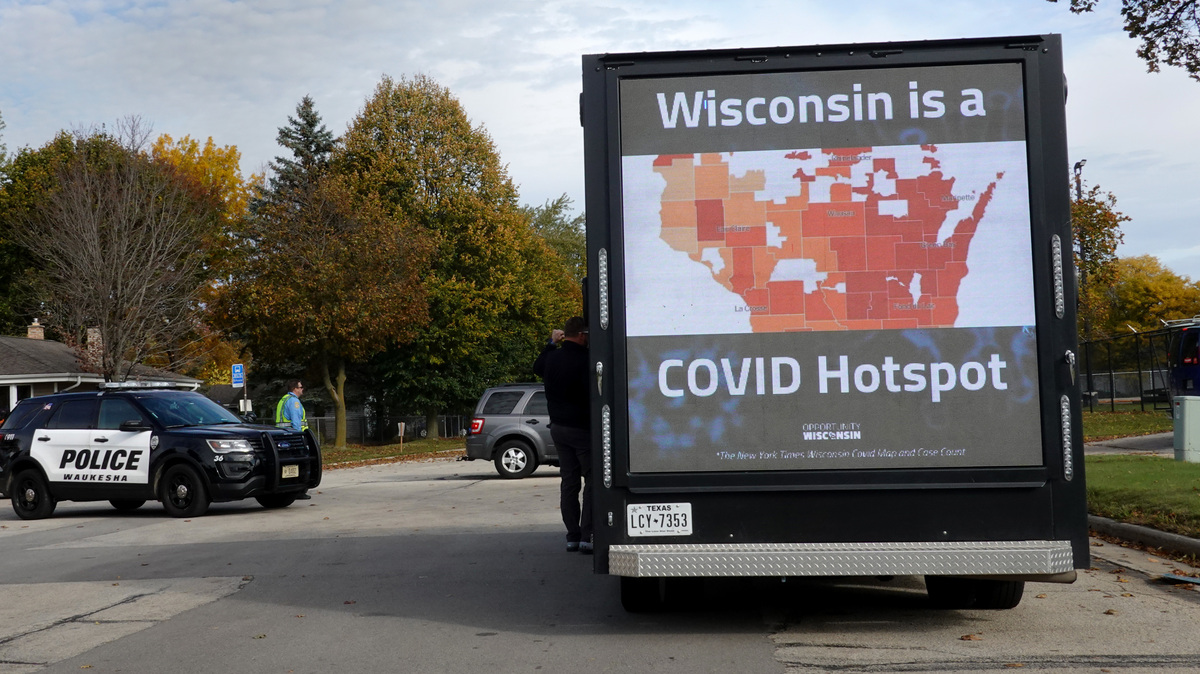 Police stand guard outside of a rally with Vice President Pence on Oct. 13 in Waukesha, Wis. The state is experiencing a surge of COVID-19 cases, threatening to overwhelm rural hospitals.

Wisconsin is now experiencing a massive upsurge in cases that rivals the numbers seen in much bigger states. Hospital beds are at about 85% capacity statewide. The state just opened a field hospital near Milwaukee that can accommodate more than 500 patients.

“Early on in the pandemic, we put a lot of plans in place and then we were fortunate enough to be able to put those away for a while. We had COVID cases, but they weren’t overwhelming. Things were going OK,” says Dr. Jeffrey Pothof, an emergency room doctor in Madison. “And then everything changed. And now we are the next hot spot. And that’s been so challenging for all of our staff who have been at this for so long now.”

Pothof, who is also chief of quality for the University of Wisconsin-Madison’s health system, tells NPR’s Morning Edition that medical supplies are in OK shape. The biggest concern is staffing.

“It’s one of the things that we as a health system just can’t create by investing more money or more time. And, you know, we’re running short of critical care nurses, critical care physicians for patients that need them because they have COVID-19 and they’re in one of our ICUs,” he says.

Hospitalizations have skyrocketed in the last month in Wisconsin, a state with a mix of rural and urban areas. Pothof says patients frequently come from rural hospitals that exceed their capacity to his hospital in Madison. It’s those rural areas that are of particular concern as COVID-19 cases rise.

Weiler, who supervises the COVID-19 unit at Marshfield Medical Center, says they “either send somebody home or they leave and then we get somebody else in a bed right away.”

“Although we’ve planned and are working through our plan, there is a finite amount that we can support,” he says. Many people already travel two to three hours to get to their facility. “And if we can’t take care of them, if our capacity is reached, they’re going to have to travel another one to two to three hours as well. And that’s very hard on patients and also very hard on their families and communities.”

Andrews says the system has not reached capacity yet, but has asked surgical partners to postpone elective surgeries.

Both Marshfield and Wausau are dealing with an additional challenge: staffers getting COVID-19 themselves.

“If we are putting ourselves at risk and we get sick, who covers for us?” says Weiler in Marshfield.

She emphasizes the advice of health officials for everyone: Wear a mask. Don’t gather in groups. Social distance. Stay 6 feet apart. Wash your hands. If you’re sick, stay home. “That little bit can kind of help us a long way.”

Staff are tired, she says. “The exhausting part,” says Weiler, is that “we don’t know when it will end or when it will slow down.”

Bystaronline@reachplc.com (Unzela Khan) A five-year-old boy has been viciously attacked by a pack of dogs, ripping his scalp and ear off as he walked home...
Read more