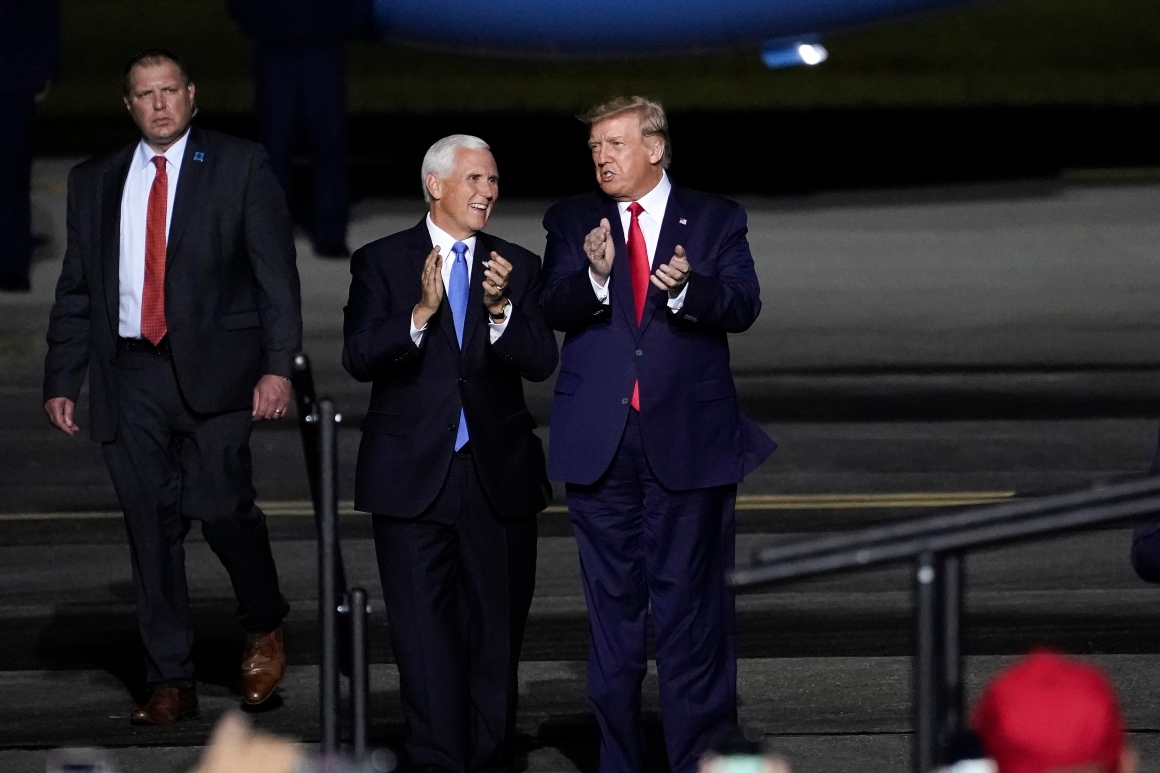 “That’s all he texted back. He was always so convinced we were going to win and I think he has the same confidence right now,” recalled Short, who now serves as the vice president’s chief of staff.

Pence, a movement conservative with presidential ambitions of his own, is approaching the current race with similarly outsized optimism. He’s convinced the come-from-behind dream, which is animating the Trump campaign’s truest believers in the last eight days of the 2020 race, remains feasible — even as a growing cluster of Covid-19 infections among the vice president’s staff draws renewed attention to his administration’s inability to control the pandemic. Despite the blow to Pence’s credibility, as his own team is hobbled by the virus that he was supposed to contain nationwide, the vice president’s aides and allies said he remains hopeful he can still be useful in the final sprint to Election Day as he defies concerns about exposure risks and continues to campaign.

Some experts say Latinos will be the second largest voting group in this year’s election. But the group’s ethnical and cultural diversity makes it a particularly difficult one for the political world to understand, and an extremely difficult one for both parties to appeal to.

After polls last week showed the race tightening in some battleground states, Pence was left with no illusion about his delicate role — of shifting the focus away from Trump’s personality without irritating his boss or MAGA devotees — in the remaining days before the final voters cast their ballots.

“He did this in 2016, where he successfully signaled to conservatives it was OK to be for Trump. Now the target audience is suburban Republicans who aren’t comfortable with [the president’s] style, but care about the policy issues,” said Club for Growth president David McIntosh. “While Trump talks about law and order like ‘the gangs are coming, be careful,’ Pence is more nuanced and talks about how we need police to guard our schools in case there’s a shooting, or we need people to answer 911 calls.”

For the vice president today, the 2020 election is more important to his political future than the race he ran four years ago — a contest that could facilitate a future White House bid or complicate his path to higher office depending on the outcome. If Trump wins reelection, it’s plausible his ultra-loyal vice president inherits at least part of the MAGA base heading into the 2024 GOP primary — buoyed by a bond to Trump for four more years. But if voters emphatically reject the president on Nov. 3, the unavoidable traces of Trumpism in a Pence presidential campaign could be politically toxic, possibly even fatal.

“There’s a lot riding on the outcome for him,” said McIntosh, a longtime friend of Pence’s who has been in touch with the vice president in recent weeks. “He’ll either continue on as the sitting vice president or be a former vice president. Both of those are really important posts in American political life, but I know he has a preferred outcome.”

Hoping to dodge the ex-VP scenario, Pence has spent the final weeks of the 2020 race operating at full speed — a pace he plans to maintain this week without his top lieutenants. Late Saturday, Pence’s office confirmed that Short, his chief of staff, had tested positive for the novel coronavirus and would spend much of the final countdown to Election Day quarantining at his home. Longtime Pence political adviser Marty Obst, who has frequently accompanied him on campaign trips, also tested positive, along with at least two other staffers inside the vice president’s office, according to a senior administration official. The sudden outbreak set off alarm bells inside the Trump campaign late Saturday night, as aides wondered whether they should scrap the vice president’s schedule — an idea White House officials and Pence himself flatly rejected.

In the industrial Midwest, Pence has worked to court swing voters who have turned on Trump four years after he won them over with messaging on the economy, trade and the administration’s response to the coronavirus pandemic, which he leads as head of the federal government’s Covid-19 task force. In Florida, North Carolina and Georgia, and other states with large swaths of Catholic and evangelical voters, he has held rallies and attended faith-based conferences to animate religious conservatives, whose turnout could be the deciding factor in Trump’s quest for reelection. In Arizona, a state long considered a GOP stronghold, Pence and his wife Karen have chased Latino voters and military veterans as part of a push to prevent the state from turning blue.

And in ways only the vice president can manage, he has ably defended Trump — for holding massive rallies that flout public health guidelines, delivering a pugnacious performance in the first presidential debate and nominating a Supreme Court justice one month before Election Day — with little evidence of damage to himself or their campaign’s overall efforts so far.

That could change this week as Pence faces fresh scrutiny over his and the president’s handling of Covid-19 in battleground states like North Carolina, where the state’s department of health and human services recently reported its highest single-day increase in new coronavirus cases since the disease first arrived in the United States.

Pence will spend the next week splitting his time between areas where “he can help with a lot of the faith community” and areas where voters care deeply about economic conditions and the ongoing coronavirus pandemic, according to Short, who spoke with POLITICO before his positive diagnosis.

As Trump prepared for the final presidential debate Thursday in Nashville, Pence hosted a rally in Oakland County, Mich., focused on trade, fracking and how the president’s economic agenda differs from Democratic presidential nominee Joe Biden’s. On Friday, Pence visited Ohio, where the latest polling has shown Trump with a slight edge over Biden, and Pennsylvania, where Roman Catholics have long played a pivotal role in the swing vote.

“There’s a level of excitement you want and in a year where you have a pandemic, turnout is going to be important,” Short said, adding that Pence wants to ensure religious conservatives are “excited to come out and vote” for the Republican ticket.

The final stretch of the 2020 race has had no shortage of obstacles for Pence, who had already become the top surrogate for the Trump campaign when the president, his campaign manager Bill Stepien and Republican National Committee Chairwoman Ronna McDaniel tested positive for Covid-19 at the beginning of the October. Following Trump’s performance in the first debate, where his incessant interruptions of Biden and moderator Chris Wallace led to bipartisan criticism, the vice president was forced to oversee a course-correction in his own debate against Kamala Harris.

“The first debate with the presidential candidates became a personality clash and nobody felt good about it once it was over,” said McIntosh, who was pleased with how the vice presidential debate subsequently unfolded. “Pence kind of refocused the election to be about policy differences and he did that in a sharp, but polite way.”

Then there was the president’s Oct. 9 appearance on The Rush Limbaugh Show, where he warned Iran not to “f— around” with the United States. One person familiar with the situation said the vice president’s team was annoyed by Trump’s profanity, which drew private criticism from evangelical leaders and prominent conservative Christians. Despite being chided for irreverent and coarse language at his rallies last year, Trump has continued to swear in front of audiences at some of his recent campaign stops. On a conference call with campaign staff last week, the president told his team to get off their “asses” and work as hard as possible in the final sprint to Election Day.

Now, Pence is left with a barebones staff at the height of the 2020 race and renewed interest in the Covid-19 pandemic — one of the leading causes of the exodus of senior voters and suburban Americans from the Republican party.

Other moments on the campaign trail have underscored the disconnect between Pence’s careful handling of controversial topics and Trump’s tendency to stir further controversy. At a recent town hall in Miami, the president repeatedly insisted he didn’t know enough about the QAnon conspiracy theory movement to denounce it. Though Pence similarly said he didn’t “know anything about that” during a CNN appearance in August, he went a step further than his boss to say, “We dismiss conspiracy theories around here out of hand,” and canceled a Montana fundraiser in September after learning that the couple hosting it were unabashed QAnon supporters.

Pence has also defended Trump’s handling of the coronavirus pandemic, despite the president’s recent efforts to play down its severity by claiming infection rates are “rounding the turn” even as daily case counts hit fresh records, and expressed empathy in a manner that has escaped his boss for Americans grappling with the virus’ toll.

“Our nation’s gone through a very challenging time this year,” Pence said at the Oct. 7 vice presidential debate.

As much as Pence’s messaging and congested campaign schedule in the countdown to the November election are born out of a desire to secure victory, people close to the vice president acknowledge that there are also long-term advantages at play.

Through his face time with seniors, women, and suburban Americans — voting blocs that are trending away from the GOP — they say Pence is forging relationships that could prove valuable four years from now. And with his visible role on the campaign trail, where most of the president’s other top surrogates are members of the first family, Pence is reinforcing his image as the ultimate Trump loyalist for base voters who might prioritize loyalty to the president when the 2024 primary kicks into full gear.

“He’ll have a soapbox to stand on while so many others are scrambling to figure out what the Republican party should look like after Trump,” said Jon Thompson, a former Trump campaign aide. “Pence can really excel at walking both lines because the Trump base could support him, but so could the old guard and establishment Republicans who were very turned off by Trump.”

Should Trump fail to defeat his Democratic opponent on Nov. 3, Pence aides said they expect the vice president to spend 2021 quietly watching how the public responds to a Biden administration before reentering the political scene in 2022 to lend a fundraising hand to GOP governors and congressional hopefuls in their races and lay the groundwork for a potential White House bid two years later.

“In a very personal way he and Karen believe that come what may, things are going to be fine,” said McIntosh. “They have done what they were called to do and done it well, but they will be ready to pick up and move onto the next part of life.”