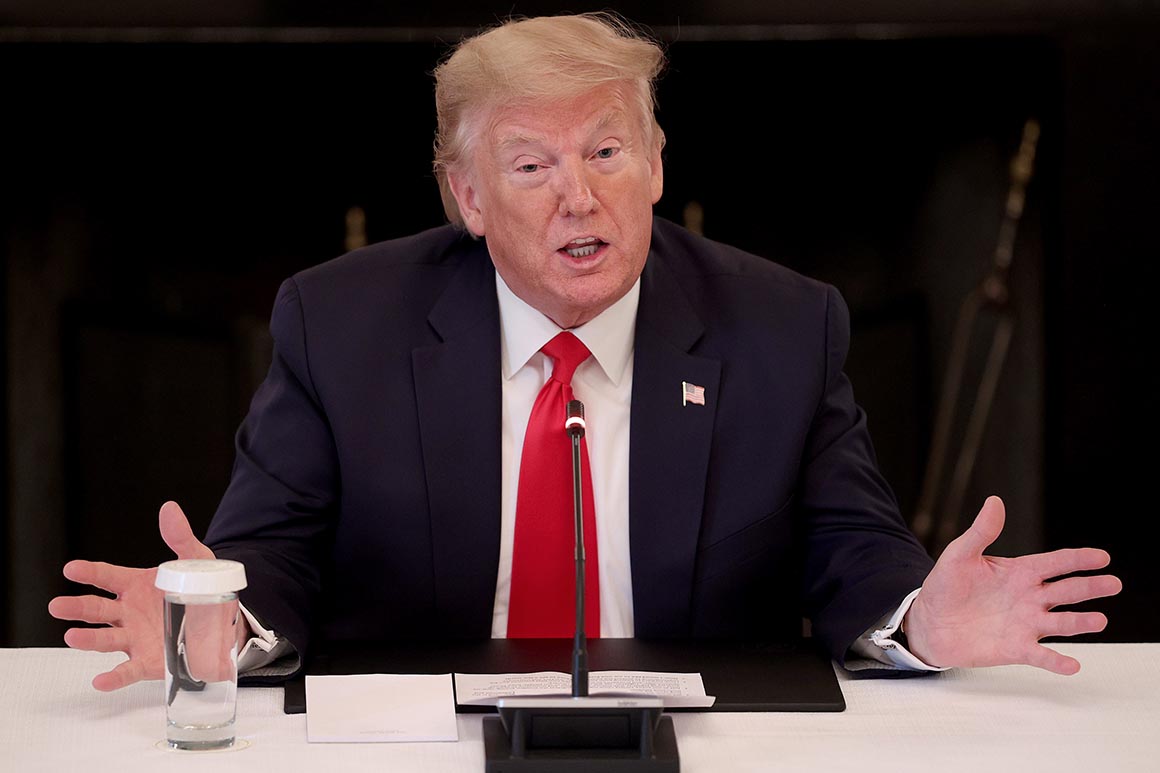 For much of the nation’s 100 days at war with the coronavirus, Donald Trump has been a commander in chief in search of an exit strategy.

The president has suggested the virus will simply disappear, touted unproven treatments as miracle cures, and fantasized about a future of economic resurgence and rapid return to normalcy.

Yet as the White House shifts its focus away from the public health response and toward rebuilding an economy ravaged by the pandemic, there remains little clear sense — even within his own administration — of how close the U.S. is to victory, and what “winning” the war even looks like.

Successive benchmarks set by Trump that rested on containing the virus’ early cases, slowing the disease’s spread and establishing a national pandemic defense have fallen by the wayside.

And this week, Trump’s predictions that the U.S. may see just 60,000 coronavirus deaths were belied by the brutal reality of the data.

“We’re on the other side of the medical aspect of this, and I think we’ve achieved all the different milestones that are needed, so the federal government rose to the challenge and this is a great success story,” White House senior adviser Jared Kushner told “Fox & Friends” on Wednesday, as the death toll approached 61,000. “And I think that that’s what really needs to be told.”

The situation on the ground is more stark, according to interviews with public health experts, current and former administration officials and Trump allies. Thousands more Americans are dying from the coronavirus each day. A new wave of outbreaks is likely in the fall. Doctors are struggling to answer basic questions about the virus’ behavior. And despite a worldwide race for a vaccine, even the most optimistic scenarios envision months of waiting.

Well after the president declares America reopened for business, the nation could remain mired in a slow-rolling crisis defined by constant death, decimated consumer confidence and a fundamental shift in the patterns of everyday life.

“This is largely going to be a story of accommodating to new risks in our lives,” said David Rubin, director of PolicyLab at the Children’s Hospital of Philadelphia. “This is about behavior change.”

That undercurrent is increasingly at odds with a White House that’s signaled plans to press ahead into a new phase of the response focused on the economic recovery. It’s rhetorical ground seen as far more favorable to Trump as he eyes reelection, and comes amid polling showing frustration over the administration’s handling of the pandemic.

“When it comes to rebuilding the economy and getting people back to work, the president has significant advantages over Joe Biden right now,” said one adviser to the Trump campaign. “If there’s a sense we’ve recovered from this, and there’s a sense the economy’s getting better, he’ll be OK.”

Buoyed by indications that the U.S. has hit its peak for new daily coronavirus cases and signs of a ramp-up in testing capacity, the Trump administration over the past week has begun making its case, touting the country’s staggered reopening over the next month as key to jump-starting a dormant economy.

“I think we’re going to have a phenomenal third quarter,” Trump said Monday, forecasting fresh economic growth as states ease their lockdowns. “With a tragedy that this country had to endure and go through, with all of the death and the people that died and were so badly hurt by what happened, and you can only say God bless them — but if you would’ve said that our country would be in the position we’re in now — we’re ready to move forward.”

But many public health officials offer a less optimistic assessment. They warn the U.S. is still the early innings of its coronavirus response — and nowhere close to vanquishing the disease.

After a slow start, the Trump administration has spent the past three months racing to keep pace with the pandemic and get the virus under control. Yet as states start lifting their distancing restrictions, it also boosts the odds of reigniting a new round of outbreaks.

“I don’t think they understand that,” said a former senior official at the Department of Health and Human Services. “We’re going to be in containment mode for the next 12, 18, 24 months.”

In a statement, White House spokesman Judd Deere defined the administration as in an “ongoing war with an invisible enemy,” emphasizing that efforts to reopen the country will be based on “science-based guidelines to slow the spread, a blueprint for testing and a data-driven plan.”

“We don’t define winning a war by the casualty count; winning is protecting the health and safety of our great Nation, saving lives, and reigniting our economy,” he said.

Still, under the best-case scenarios, the next several months of that war could look more like a tentative reemergence than a full-throated revival of American life — a period characterized by the slow resumption of some basic activities against the backdrop of a slower, but still climbing, death toll and urgent efforts to regularly test millions of people per week.

The more likely future is bumpier and longer than that, several public health experts said. The coronavirus could begin to recirculate come fall, combining with the seasonal flu to create an even more deadly public health emergency. Some states would be forced to shutter businesses once again, dealing another massive economic and psychological blow. Hospitals and health care workers would go back into overdrive.

There’s no reliable way at this point to predict how many Americans the coronavirus could kill by the end of the year, but some public health experts say it is almost certain that it will be many more than the 70,000 to 80,000 some models envision through late summer. And it’s a cycle likely to play out repeatedly until the discovery of a vaccine or cure.

“As the economy starts to open, I expect that we’re going to see spikes in the number of people who get sick — and a continued over-representation of black Americans and Latinos among those who are getting infected and dying,” said Richard Besser, CEO of the Robert Wood Johnson Foundation and a former acting director of the Centers for Disease Control and Prevention.

There are some prospects for hope, including some promising results from clinical trials of antiviral drugs and ongoing vaccine tests. On Wednesday, the Trump administration hailed early signs that an experimental drug may be the first effective coronavirus therapeutic.

But the next stage of the pandemic response will turn largely on the same crucial — if tedious — issues that defined the first months of the crisis: widespread testing, consistent access to medical supplies and a federal government interested in ensuring access to both.

“We can have a lot of life and a lot of economy, or we can have very little of both,” said Ashish Jha, director of the Harvard Global Health Institute, who criticized the federal response so far as largely subpar. “The playbook here is not complex.”

Winning the war on the coronavirus over the next several months, he added, is less about finding the quick route out of the crisis and more about the Trump administration being willing to stay in the fight.

“The virus is not cunning — it doesn’t change strategies,” Jha said. “It’s not that hard. We have just not been interested in trying to execute on it.”