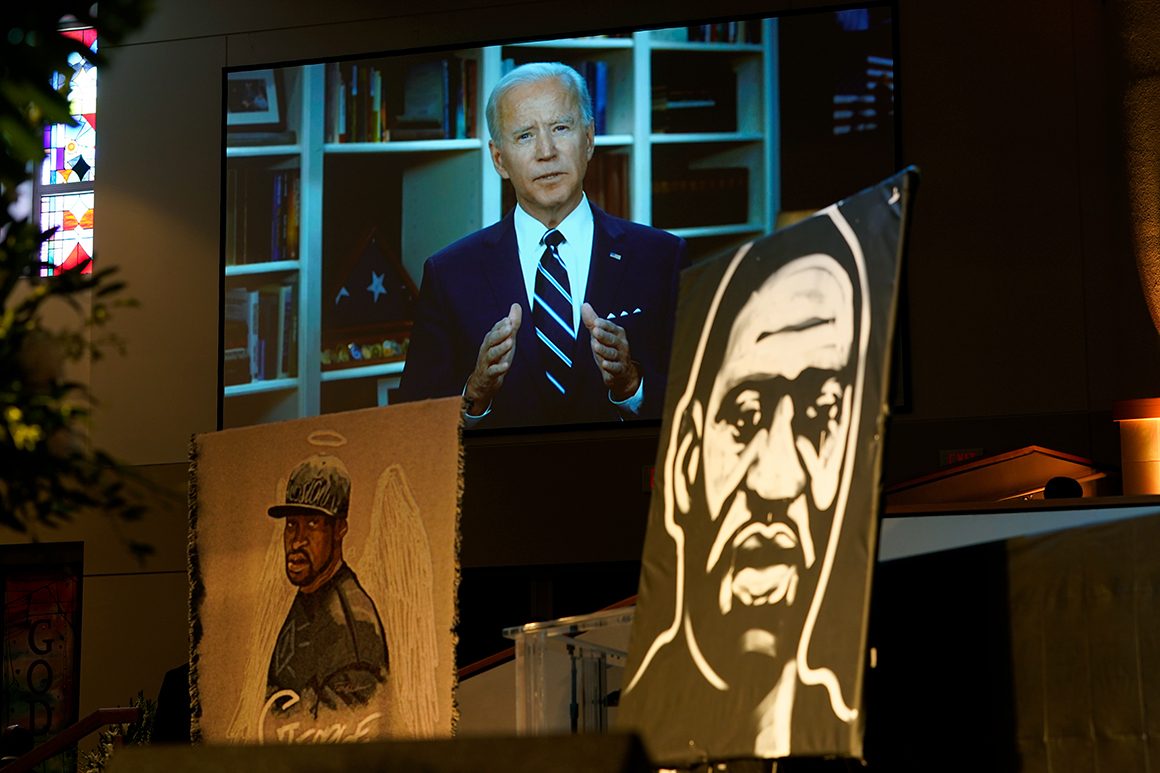 Biden’s list of contenders includes Sen. Kamala Harris of California, Florida Rep. Val Demings and Atlanta Mayor Keisha Lance Bottoms. All three have seen their public profiles rise in recent weeks. Harris, the lone VP contender to have run against Biden in the primary, also saw her favorability among Democrats rise in the poll. Meantime, public attention on Bottoms has grown since her well-reviewed speech after massive protests and looting descended on her city.

With the focus turning to police reform, Demings, a former metropolitan police chief, and Harris, a former district attorney and state attorney general, have leaned on their personal experiences despite the potential for backlash. Both argue that their careers, which became a burden for Harris in the primary, are an asset in their efforts to overhaul law enforcement.

“Their experiences and their qualifications each connect to a piece of the work that we need to do,” Glynda Carr, president and chief executive of Higher Heights, said in assessing Demings and Harris in the moment.

“The two contenders that actually have law enforcement and prosecutor backgrounds have a piece of experience that uniquely provides perspective and potentially a vision around reimagining how we create an America where black lives matter.”

We break down how decades of drug policy have fueled the crisis in policing that’s unfolding today.

Demings, who surfaced nationally this year as a House impeachment manager of President Donald Trump, has focused on police tactics she believes must change, such as outlawing neck restraints. Harris, who on Monday announced a sweeping police reform bill in Washington, cited her own experiences as a prosecutor when calling for independent investigations into police misconduct and a national standard for when officers can use force. She contends it’s too easy for officers to argue in court that it was “reasonable” to use force, and instead they should have to prove that it was “necessary.”

The poll examined the importance to Democrats of Biden selecting a vice presidential nominee who has experience as a prosecutor or in law enforcement. It found that Democrats place slightly more stock in a candidate with experience in law enforcement, 46 percent, than a background in the more narrowly defined role of prosecutor, 41 percent. It did not test whether Democrats view either of the job categories as a positive or negative.

Other African American women under consideration include former national security adviser Susan Rice and Stacey Abrams, a former Democratic state House leader in Georgia who narrowly lost a race for governor in 2018.

While the priority of picking a woman of color has grown among Democrats, more voters overall, 48 percent, view it as generally unimportant.

Abrams, Demings and Bottoms remain far less known nationally, with 35 percent, 64 percent and 65 percent, respectively, of voters saying they’ve not heard of them.

Voters of color were instrumental in rescuing Biden’s campaign after big early losses. Polls taken throughout the spring have shown that black voters in battleground states would be more enthusiastic about supporting Biden if he were running alongside a black woman.

“That would be the true recognition by Vice President Biden that the African American community in general and African American women in particular are, in fact, the backbone of the Democratic party,” said Michael Nutter, a Democratic National Committee member and the former mayor of Philadelphia. “It would seem to me that the Democratic Party would be a tremendously powerful and energetic ticket with Vice President Biden and a woman of color,” added Nutter, referring to the combination as a “dynamic duo” for Democrats.

Even before the protests, some party officials and activists were suggesting that the importance of elevating a black leader had grown when the coronavirus pandemic put millions more people out of work and highlighted the disparities in cases and deaths among people of color.

“You’ve got to make sure that voting is still a priority in their minds and their hearts … So, this election is very different. There’s no guarantee we’re going to be rushing to the polls.”

Encouraging people to vote will take a ticket and a plan that excites and inspires people of color, Moore added.

The survey of 1,992 registered voters was conducted June 6 and 7 and has a margin of error of plus or minus 2 percentage points. The subsamples have higher margins of error.

Morning Consult is a nonpartisan media and technology company that provides data-driven research and insights on politics, policy and business strategy.

More details on the poll and its methodology can be found in these two documents: Toplines / Crosstabs