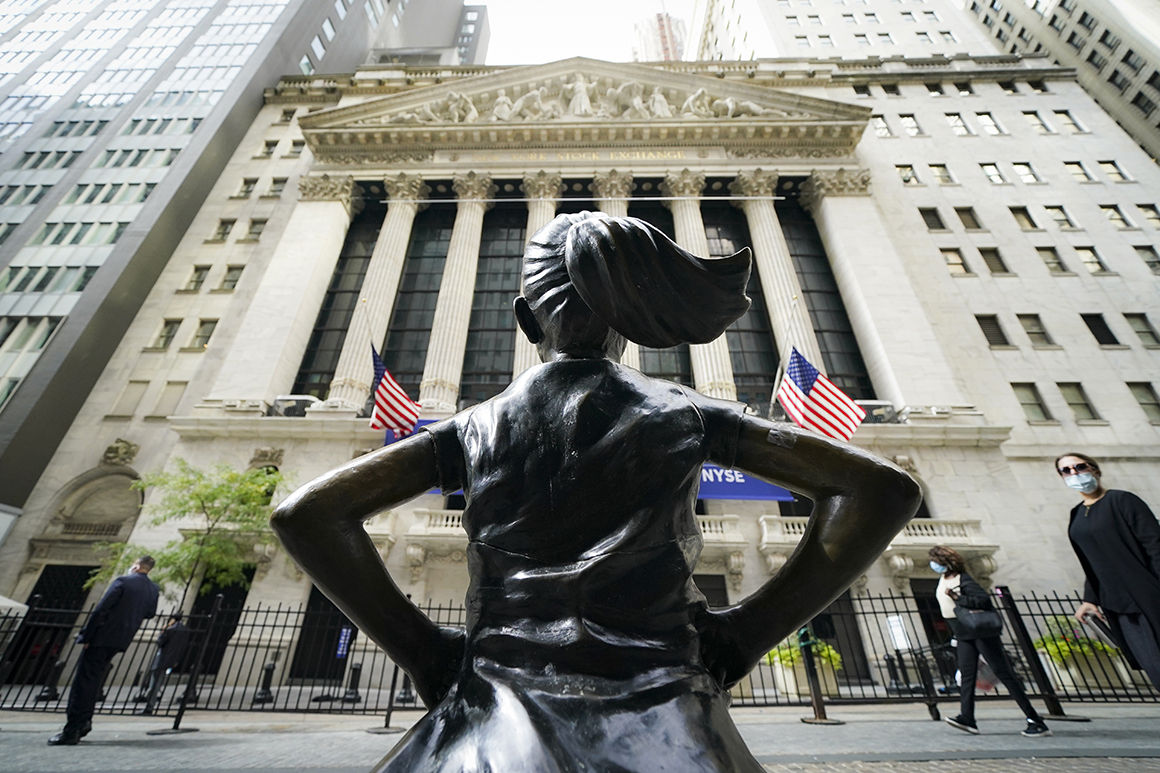 Far from panicking at the prospect of a Biden win, Wall Street CEOs, traders and investment managers now mostly say they would be fine with a change in the White House that reduces the Trump noise, lowers the threat of further trade wars and ensures a continuation of the government spending they’ve seen in recent years.

“The market is focusing on an end to the uncertainty around the Trump administration, and that in many respects is what underscores the pricing action around a possible Biden scenario and a blue wave,” said Joseph Brusuelas, chief economist at consulting firm RSM US. “Firms and investors crave stable expectations and that is how the Street is interpreting a likely Biden victory.”

With just seven days until the election, Trump is facing a surge in coronavirus cases and an outbreak within his VP’s office, providing a new line of attacks from Joe Biden. POLITICO’s Nancy Cook breaks down both campaigns’ strategies for the final week.

Wall Street’s sharp drop lower on Monday as Covid-19 cases surge in the U.S. and Europe highlighted just how worried markets are about the trajectory of the virus and how dependent they’ve become on the prospect of trillions more in federal support for a struggling economy in which 23 million people remain on some type of unemployment assistance and some businesses face a grim winter from the coronavirus.

Investors could wind up seriously disappointed if the result next week produces even more bitterly divided government. And stocks could tank further if any of the results — including control of the Senate — remain unknown for days or even weeks.

“The market very much believes that Biden is going to win and the Senate is going to tip to Democrats,” said the CEO of one of the largest banks on Wall Street, speaking on the condition that he not be identified. “And the assumption is that we are going to have a very significant increase in stimulus very quickly and that’s very positive for markets. But the fact is there is still a tremendous amount of uncertainty around the outcome of the election and when stimulus might actually come, if it ever does.”

Enthusiasm for the idea of a Democratic sweep and huge new federal spending — cited in recent reports from Goldman Sachs and other major banks — has helped the stock market weather months of head fakes and political posturing from Washington on when more stimulus money may come.

While investors increasingly like the idea of a Democratic sweep, markets probably wouldn’t plunge if Trump defies national polls and pundits once again to pull off a reelection win. That would bring the promise of continued low tax rates on corporate profits, low regulation and a president eager to secure more stimulus by casting aside worries about debt.

It’s still possible that markets could initially sink on a Biden win much as they did in the initial hours after Trump’s victory became apparent four years ago. But interviews with traders and executives, as well as numerous analyst research notes, suggest Wall Street has learned to stop worrying and almost — kind of — love the idea of Democratic control in Washington.

What they probably won’t love is a divided result in which Biden wins the White House and Democrats fail to take the Senate, or Trump wins in a contested outcome and Congress becomes more divided, potentially leading to more Washington gridlock and far smaller — or even no — new fiscal stimulus.

Here are three scenarios that could play out next week and how Wall Street might react to each of them.

Under this scenario, Biden coasts to a clear victory next week that Trump cannot legitimately dispute, while Democrats hold the House and take enough Senate seats to gain effective control of the chamber.

Much of Wall Street — though not uniformly — now tends to embrace this idea because it would likely mean that the new administration would have a free hand to pass a giant stimulus bill in the early months of 2021. Such a measure, long desired on Wall Street, would likely include extended and expanded unemployment benefits, aid to cash-strapped states and fresh direct checks to Americans.

This kind of fire-hose approach totaling around $ 4 trillion helped drive a fairly robust recovery in late spring and early summer from the depths of the recession growing out of Covid-19 stay-at-home orders. But that began to reverse when the cash ran out at the end of August and consumer spending and job gains slowed. A large and well-tailored stimulus package — with at least some of it paid for to assuage deficit hawks — is essentially item No. 1 on Wall Street’s current wish list.

“If the stimulus leads to meaningful job creation and addresses the country’s infrastructure and competitiveness needs, then it could be very positive for the markets,” said Richard Bernstein, former chief investment strategist at Merrill Lynch and founder of RBAdvisors. “But the key here is that uncertainty would be reduced if Trump loses. One may not like all [Biden’s] policies, but there will be less uncertainty.”

Some on Wall Street still fear that full Democratic control in Washington would lead to higher taxes and regulations that could crimp corporate profits and thus undermine stock prices beyond early next year. “Certain sectors, mainly natural resources, will see this as close to a disaster,” said Stephen Massocca, managing director at Wedbush Equity Management. “I believe this outcome leads to the worst market. The real fear will be if progressive policies get implemented.”

That remains mostly a minority view, however. “The market is embracing the stimulus concept a blue wave would bring,” said Jack Ablin, chief investment officer and founding partner at Cresset Capital. “Perhaps investors are not fully assessing the impact of an incrementally higher corporate tax rate and increased taxes on foreign income.”

Biden wins, but the GOP holds the Senate

This is one of two potentially negative outcomes for the stock market, largely because it could mean that a Biden White House would be unable to push a giant stimulus through a GOP Senate. At the same time, Biden could still install regulators in top jobs unfriendly to big business, rolling back some of Trump’s efforts to ease restrictions on multiple industries including oil and gas and financial services.

This would be a scenario under which the corporate tax rate could remain at the lowered 21 percent enacted under the 2017 tax bill from Trump and the congressional GOP. Individual tax rates also would likely not rise, given Republican opposition.

While these facts might prevent big losses on Wall Street, the lack of another huge economy-boosting stimulus could trigger a major near-term disappointment among investors.

“Mitch McConnell is a patient warrior,” David Kotok, chief investment officer at Cumberland Advisors, said of the Senate majority leader. “He will look at his declaration to stymie Obama and likely try to repeat it with Biden.”

The market correction could be sharp in this scenario given that investors have gotten spooked for months when talks over another stimulus package fell off track in Washington. The massive stimulus provided by the U.S. Federal Reserve’s easy-money policies in the wake of Covid-19 helped keep a floor under markets. But Wall Street analysts and traders still want another big fiscal stimulus package to push the economy through the winter and spring until a vaccine emerges.

“I’d say this is the worst scenario because Washington will become like sclerotic Europe and get nothing done,” said Bernstein. “Uncertainty will remain an investment theme. And deregulation likely reverses.”

A clear and legitimate Trump victory might depress Democrats across the country, but it’s not likely to cause a giant collapse on Wall Street. While investors are clearly pricing in a Biden win, Trump holding onto office would end the threat of significantly higher tax rates on corporations and high-income individuals.

McConnell might also be more likely to embrace a bigger stimulus number if Trump remains in the White House. And House Democrats would have a hard time stopping it, given the real threats to the economy and their desire to send as much aid out from Washington as possible.

The initial reaction could in fact be a sharp snap higher on Wall Street. But it may not be one that lasts forever, given the uncertainty about whether an emboldened Trump would likely push even harder on his agenda of tariffs and ongoing battles with America’s biggest trading partners like China.

In this scenario, the market “screams higher initially as this will be a surprise,” Massocca said of a Trump win and continued split control in Congress. “Trump is very pro-business and markets like that. However, restrictive trade policies are not liked and the market figures these go away under Biden.”

Some on Wall Street embrace the idea of more gridlock in Washington, should either Biden or Trump win and face at least one chamber of Congress controlled by the opposition party. That would be seen as a check on extreme moves in either direction.

“The thing I’m concerned about with the blue wave is that we go too far on fiscal support and we don’t act responsibly,” said the Wall Street CEO. “A Biden win and the GOP holding the Senate would temper a lot of that. And everybody actually agrees that we need more stimulus.”