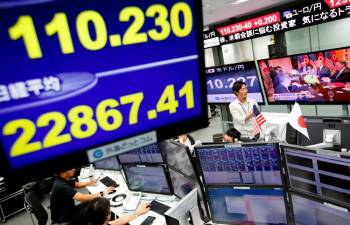 SINGAPORE: Asian stock markets made a cautious start on Thursday following two days of rallies, as investors await the passage and details of a $ 2 trillion stimulus package in the United States to combat the economic fallout from the coronavirus.

Senate leaders hope to vote on the plan later on Wednesday in Washington, but it still faces criticism. The bill includes a $ 500 billion fund to help hard-hit industries and a comparable amount for payments up to $ 3,000 to millions of U.S. families.

It cannot come soon enough, with potentially enormous weekly U.S. initial jobless claims to appear in data due at 1230 GMT.

Australia’s S&P/ASX 200 index rose 1.5% in early trade – its third positive start in as many sessions, but also its most muted. Japan’s Nikkei fell 2.2%.

Hong Kong futures were 1% higher and China A50 futures were up 0.2%. MSCI’s broadest index of Asia-Pacific shares outside Japan rose 0.3%.

“There has been so much stimulus thrown at this,” said Jun Bei Liu, portfolio manager at Tribeca Investment Partners in Sydney.

“But the positivity related to it is really just sentiment,” she said, adding that investors were largely flying blind with so many companies withdrawing earnings guidance. Jobless figures may offer a “reality check,” she said.

In perhaps an early sign of the fragile mood, the risk-sensitive Australian dollar dropped 1% and the safe-haven Japanese yen rose in morning trade.

The Dow Jones Industrial Average rose 2.4% and the S&P 500 1.2%, while the Nasdaq Composite dropped half a percent following a Nikkei report that Apple was weighing a delay in the launch of its 5G iPhone.

The money at stake in the stimulus bill amounts to nearly half of the $ 4.7 trillion the U.S. government spends annually.

But it also comes against a backdrop of bad news as the coronavirus spreads and as jobless claims are set to soar, with both expected to test the nascent bounce in markets this week.

California Governor Gavin Newsom told reporters on Wednesday that a million Californians had already applied for jobless benefits this month – a number that knocked stocks from session highs and has analysts bracing for worse to come.

RBC Capital Markets economists had expected a national figure over 1 million in Thursday’s data, but say “it is now poised to be many multiples of that,” as reduced hours across the country drive deep layoffs.

“Something in the 5-10 million range for initial jobless claims is quite likely,” they wrote in a note.

Trepidation seemed to put a halt on the U.S. dollar’s recent softness in currency markets, with the dollar ahead 1% against the Antipodean currencies and up 0.6% against the pound.