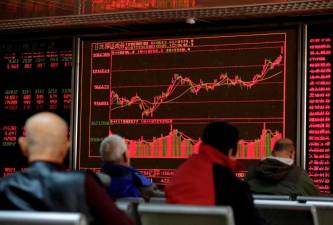 SINGAPORE/SYDNEY: Asian shares regained a measure of calm on Monday as markets bounced after a searing sell-off last week and as investors pinned hopes on a likely coordinated global monetary response to help soften the economic blow of the coronavirus outbreak.

The positive turn came after global markets took a pounding last week as the virus spread across many countries. Pandemic fears wiped out more than $ 5 trillion from a major global equity index and stocks logged their biggest falls in more than a decade.

The sheer scale of losses led financial markets to price in policy responses from the U.S. Federal Reserve to the Bank of Japan and the Reserve Bank of Australia.

Futures now imply a full 50 basis point cut by the Fed in March while Australian markets are pricing in a quarter-point cut at the RBA’s Tuesday meeting.

On Monday, investors were encouraged by comments from Bank of Japan Governor Haruhiko Kuroda who said the central bank would take necessary steps to stabilise financial markets.

“Markets being what they are, they are usually responsive to the prospect of monetary accommodation. The question is, how long this lasts and how much of a boost it gives us,” said Rob Carnell, head of Asia-Pacific research at ING.

MSCI’s broadest index of Asia-Pacific shares outside Japan rose 1%, up for the first time in four sessions and recovering from a fall of about 0.3% in early trade. But the uptick barely made up for a 10 percent tumble last week.

The rapid spread of the coronavirus has led businesses globally to curb travel, send workers home and cancel events, hitting stocks in the aviation, gambling and tourism sectors.

The disruption to global supply chains and productivity has darkened the outlook for a world economy already struggling with the fallout of the U.S.-China trade war.

“There’s no policy out there, frankly, that is going to be sufficiently large to offset the nature of what’s coming in terms of the virus. So we have to keep watching these new case numbers until these show signs of levelling off,” said ING’s Carnell.

The epidemic, which began in China, has killed almost 3,000 people worldwide as authorities race to contain infections in Iran, Italy, South Korea and the United States.

In a sign of the crippling impact of the virus on businesses, the country’s factory activity suffered the sharpest contraction on record in February.

“Policymakers face two trade-offs at this juncture: between virus control and production resumption, and between reviving activity and maintaining a disciplined approach to easing,” Sin Beng Ong, an economist at JPMorgan said in a report.

“Policy support will be bolstered, but we believe the government will refrain from large-scale demand-side stimulus.”

Leaders in Europe, the Middle East and the Americas rolled out bans on big gatherings and stricter travel restrictions over the weekend as cases of the new coronavirus spread.

Last week, bonds soared and stocks plunged in a risk-off trade. The S&P 500 index fell 11.5%, only its fifth double-digit weekly percentage drop since 1940.

On Monday, oil prices rebounded more than $ 1 a barrel on hopes of a deeper cut in output by OPEC after earlier hitting multi-year lows.

In currencies, investors sought shelter in the Japanese yen, which jumped to a 20-week high on the dollar in tandem with the massive shift in money markets to price U.S. rate cuts.

That left the dollar index barely changed at 97.976. – Reuters