Asteroid 2020 QG's trajectory changed for good thanks to Earth's gravity 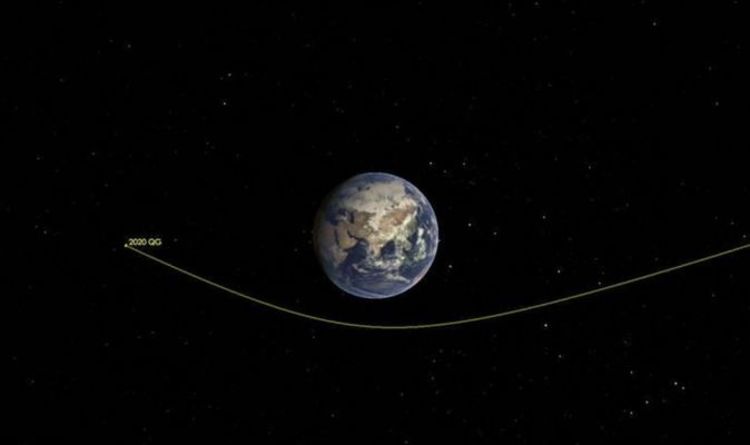 Asteroid 2020 QG, which is roughly the same size as a car, came within just 2,000 miles of our planet, making it the closest passing asteroid that experts are aware of. However, it was not until it had made its way past Earth that experts became aware of it.

The relatively small space rock sped past our planet at eight miles per second (12.3 kilometres per second), but as it did, it got pulled by Earth’s gravity.

According to NASA, the asteroid’s trajectory changed by 45 degrees, meaning its journey through the cosmos has been changed for good.

Paul Chodas, director of the Center for Near-Earth Object Studies (CNEOS) at NASA’s Jet Propulsion Laboratory in Southern California, said: “It’s really cool to see a small asteroid come by this close, because we can see the Earth’s gravity dramatically bend its trajectory.

“Our calculations show that this asteroid got turned by 45 degrees or so as it swung by our planet.”

Mr Chodas conceded that NASA did not spot the asteroid until it had past Earth.

He said: “The asteroid approached undetected from the direction of the sun. We didn’t see it coming.

“Yesterday’s close approach is closest on record, if you discount a few known asteroids that have actually impacted our planet.”

By comparison, the Moon is an average of 238,855 miles away from Earth.

However, the close approach does reiterate a need for watchful eyes on the sky.

This is why there are now plans in the pipeline which could help Earth from asteroids.

What exactly the Universe is made up of is a bit of a mystery, but scientists have for the first time calculated the amount...
Read more
Science

When is the SpaceX-NASA Crew-1 launch date? NASA and SpaceX are targetting the morning of October 31, after originally planning to launch on October 23. The...
Read more
Science

This Full Moon is also celebrated in some Asian countries, such as China and Vietnam, as it corresponds with the autumn harvest festival. In China,...
Read more
Science

As World War I was coming to an end in 1918, a major pandemic was rearing its ugly head. Combined, the two resulted in...
Read more
Science

Matt Simon Characterizing such subtle dynamics is a departure from how ecologists typically model ecosystems, tending to write off in-the-moment decision-making as inconsequential to long...
Read more
Science

Michelle Starr The stuff that makes up our Universe is tricky to measure, to put it mildly. We know that most of the Universe's matter-energy...
Read more