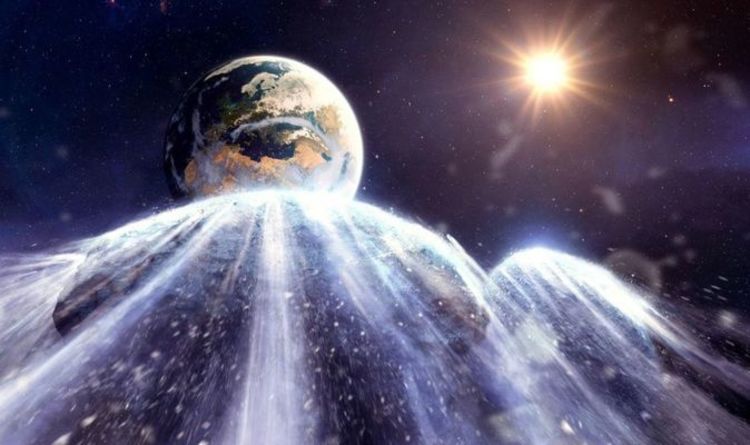 Asteroid 2011 ES4 will come within just 30 percent of the distance between the Earth and the Moon, scientists have confirmed. The asteroid is roughly 30 metres long, making it easily bigger than a double-decker bus and will come within just 0.3 lunar distance – with one lunar distance being the measurement between the Earth and the Moon – or 71,000 miles of our planet.

The likes of NASA have been monitoring the asteroid since it was first discovered in 2011, and today will be its closest approach to date.

According to NASA, the asteroid will be at its closest to our planet come 17.12 BST.

Astronomy site Space Weather said: “On September 1, asteroid 2011 ES4 will fly through the Earth-Moon system only 72,000 miles from Earth–close, but there is no danger of a collision.”

At this speed, it could travel around the Earth in an hour.

But while the asteroid will make its close approach tonight, the distance at which it will buzz Earth from is uncertain, experts say.

Astronomers use an ‘uncertainty scale’ which ranges from zero to nine, in which zero means the orbit is well known while nine means there is great uncertainty in its path.

Asteroid 2011 ES4 was only observed for four days after it was first detected on March 2, 2011, and so has an uncertainty of 7.

READ MORE: Alien technology: ‘Oumuamua could have been sent by aliens

“The scientific interest in comets and asteroids is due largely to their status as the relatively unchanged remnant debris from the solar system formation process some 4.6 billion years ago.

“The giant outer planets (Jupiter, Saturn, Uranus, and Neptune) formed from an agglomeration of billions of comets and the leftover bits and pieces from this formation process are the comets we see today.

“Likewise, today’s asteroids are the bits and pieces left over from the initial agglomeration of the inner planets that include Mercury, Venus, Earth, and Mars.”

NASA says the asteroid will not collide with Earth and its path will take it away from our planet.

Rachael Rettner, Live Science A man in Massachusetts died after eating too much black licorice, which contains a compound known to be toxic in large...
Read more