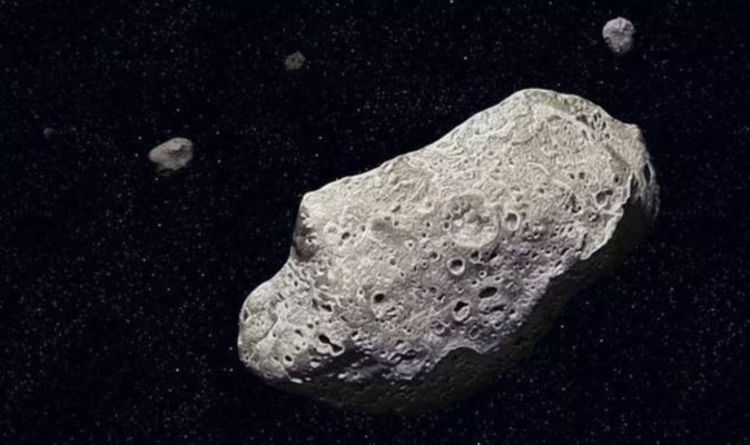 According to the space agency, as reported by Interesting Engineering, there is a 0.000001 percentage chance of such a large asteroid hitting Earth each year. NASA searches for asteroids that could pose a threat to Earth via its Near Earth Object program.

This produces a table showing how likely each space rock is to hit Earth over the next 100 years.

Only large asteroids are likely to pass through the Earth’s atmosphere without breaking up.

According to Interesting Engineering any rock less than 10 meters long will be destroyed by a thermal explosion.

However fragments of the asteroid could still make it through the atmosphere and hit Earth.

In 1992 a small rock fragment, broken from an asteroid, made a hole in a parked car.

Properties in Connecticut and Alabama have also taken damage from space rocks over the past century.

However there have been no reported human fatalities from asteroids in the past century.

NASA warns there is a 0.1 percent chance of an asteroid big enough to level a city hitting Earth each year.

In a blog post she wrote: “Shoemaker-Levy 9 was a sort of punch in the gut.

“It really invigorated our understanding of how important it is to monitor our local neighborhood, and to understand what the potential is for impacts on Earth in the future.”

Separately NASA is looking to build a new space telescope to hunt asteroids that could collide with Earth.

It was approved in September under the control of NASA’s California based Jet Propulsion Laboratory.

The hope is the new telescope will become active at some point from 2025 onwards, if the requisite funding can be acquired.

In 2005 Congress instructed NASA to identity 90 percent of potentially dangerous asteroids larger than 450 feet long by the end of next year.

This deadline will almost certainly be missed as the project ran into funding difficulty.

However in 2016 alone 564 asteroids of this size were discovered.

According to Space.com around 360 asteroids of this category were discovered last year to late September.

An asteroid strike on Earth from a large rock could cause carnage.

Facebook
Twitter
Pinterest
WhatsApp
Linkedin
ReddIt
Email
Tumblr
VK
Previous articleGame of Thrones: This White Walker theory changes EVERYTHING – Or does it?
Next articleAmy Klobuchar wins endorsement in first in the nation primary from the New Hampshire Union Leader newspaper