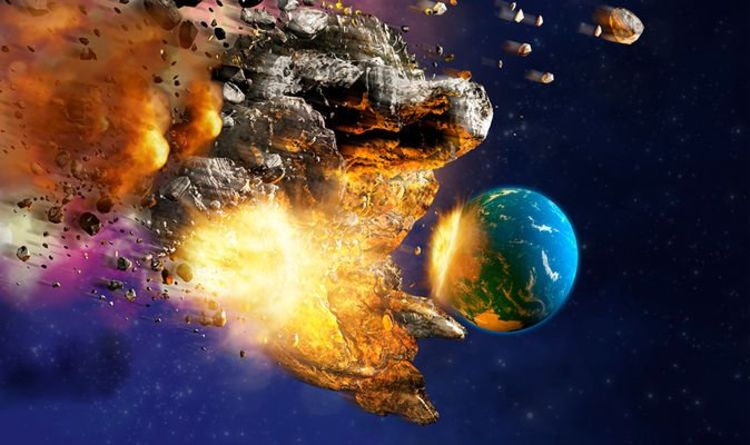 Asteroid 101955 Bennu, formally known as 1999 RQ36, is a PHO listed on the Sentry Risk Table with the second-highest cumulative rating on the Palermo Technical Impact Hazard Scale. Investigators have already warned NASA that it could be devastating if they do not act, and, according to a study by scientist Maria Eugenia Sansaturio, the 1999 asteroid may even strike Earth. Dr Sansaturio warned in a report for the Solar System journal Icarus that there is a good chance of the asteroid striking.

Now, YouTube channel Destiny has explained exactly what is going on.

They said earlier this month: ”It is a potentially hazardous object that is listed on the Sentry Risk Table with the second-highest cumulative rating on the Palermo Technical Impact Hazard Scale and it’s getting closer to Earth every minute.

“Names after the ancient Egyptian mythological bird associated with Sun, creation and rebirth, the asteroid was heavily observed by scientists in the Arecibo observatory and the Goldstone Deep Space Network as it came closer to Earth on September 23, 1999.

“It is an ancient relic of our Solar System early days, dating back to more than 4.5 billion years and scientists think it likely broke off from a much larger asteroid about 700 million years ago.

“However, the gravitational pull of Saturn dislodged it from the [asteroid] belt and it has drifted much closer to the Earth since then.”

The channel went on to reveal when the asteroid could strike.

It added: “It is very possible that this one could end up eventually hitting the planet in the last quarter of the 22nd century.

“it is roughly 1,640 feet in diameter, about the same height at the Empire State Building in New York and orbits the Sun once every two years and every six years comes very close to Earth, within 0.002 astronomical units, about 186,000 miles.

“During atmospheric entry, Bennu would begin to break up at an altitude of 236,000 feet, hitting the Earth at a velocity of 27,000mph.

“The impact would release energy equivalent to 1,450 megatons of TNT, the most powerful nuclear weapon ever detonated had a yield of 50 megatons.

“If you total up all the nuclear testing in history, you are looking at 510 megatons, so Bennu would release three times more energy than all nuclear weapons in history.

“With that in mind, the crater left behind would measure 4,500 metres in diameter and 1,200 metres deep.”

However, NASA has a plan.

ByThe caldera inside Yellowstone National Park is dubbed a supervolcano due to its capacity to inflict untold global devastation in the event of a supereruption. It...
Read more
Science