Asteroid news: A rock taller than the Leaning Tower of Pisa will zip past Earth tonight 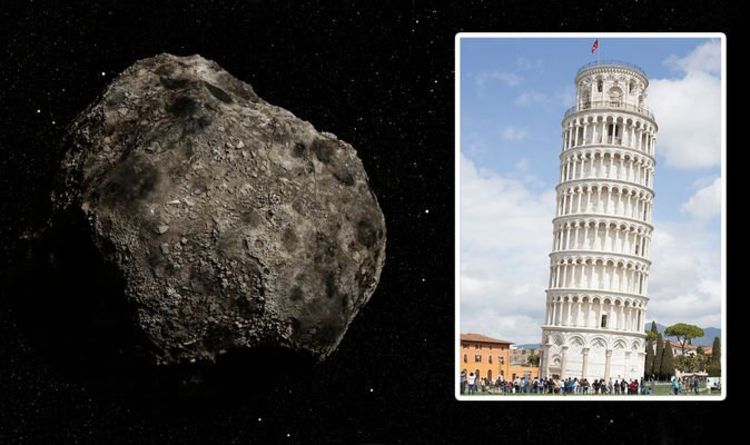 The news comes after NASA’s Center for Near-Earth Object Studies (CNEOS) confirmed the asteroid’s path on April 15 this year.

The asteroid is orbiting the Sun on a path astronomers have identified as an “Earth close approach”.

But the asteroid does not pose any danger to our planet and will miss us by about eight times as far as the Moon is.

NASA said: “As they orbit the Sun, near-Earth objects (NEOs) can occasionally approach close to Earth.

Asteroid GA3 is an Apollo-type NEO, flying around the Sun on a trajectory that crosses Earth’s orbit.

NASA classifies all comets and asteroids as NEOs if the orbit the Sun from within 1.3 astronomical units.

One astronomical unit is the distance between the Earth and the Sun – about 93 million miles (149.6 million km).

Asteroid GA3 will slash this distance down to just 0.02076 astronomical units tonight.

In other words, the rock will safely zip by from about 1.9 million miles (3.1 million km).

At the lower end of the estimate, the asteroid is wider than a bowling lane is long.

At the upper end of NASA’s estimate, the space rock stands taller than the Leaning Tower of Pisa in Italy.

Smaller space rocks will most likely vaporise before reaching the ground.

NASA said: “If a rocky meteoroid larger than 25 meters but smaller than one kilometre – a little more than half-a-mile – were to hit Earth, it would likely cause local damage to the impact area.

“We believe anything larger than one to two kilometres – one kilometre is a little more than one-half mile – could have worldwide effects.”

Thankfully, the asteroid will not come close enough to strike the planet.