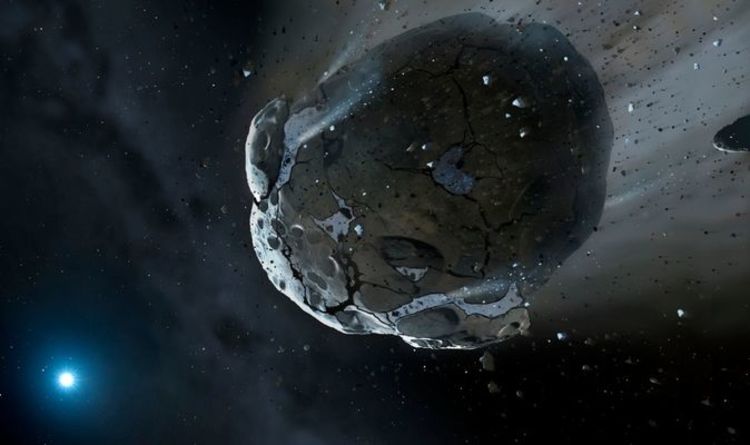 And although this may seem a huge distance, this represents a mere quarter of the way between the Earth and the Moon – which measures 239,000 miles (385,000km).

Then only 14 hours later, smaller-sized asteroid 2020 RD4 passed at a similarly close distance.

Dr Gianluca Masi, an astronomer at the Virtual Telescope Project managed to capture both asteroids as they passed the planet with remarkable clarity.

He said in an email: “Asteroid 2020 RD4 will safely come at about

[a quarter] of the average lunar distance from us.

“Curiously, another ‘fresh’ asteroid, 2020 RF3, safely came even a bit closer a couple of hours ago and I could capture it.”

Explaining why NASA is investing so much into planetary defence, the space agency writes: “What would we do if an NEO were found to be on a collision course with Earth?

“Could we deflect the asteroid to prevent the impact? In collaboration with Aerospace Corp, Centre for Near Earth Object Studies has developed an NEO Deflection App, which examines the kinetic impactor deflection technique for a series of hypothetical impacting asteroids.”

The largest asteroid is called Vesta and is estimated to measure a whopping 329 miles (530km) across.

Fortunately, Earth’s thick atmosphere protects the planet space rocks of this size, as they would safely burn-up before impact.

However, an asteroid of the size of Vesta would cause apocalyptic damage to Earth, should one collide.

The good news is there are no known asteroids on anything approaching this scale expected to slam into Earth any time soon.

NASA said in a statement: “Vesta is the second most massive body in the main asteroid belt, accounting for almost nine percent of the total mass of all asteroids.

“Only dwarf planet Ceres is more massive in that region of rocky debris between Mars and Jupiter.”

In 1912, as the Titanic was on its maiden voyage from Southampton to New York, it hit an iceberg causing it to sink. More...
Read more
Science

Known as cartilaginous fish - which means their skeletons are not made of bone, but cartilage - sharks were generally understood to have not...
Read more
Science